The Next War - Operation Attila - D+3

After several hot discussions in Moscow, Warsaw Pact decided to continue using the saturation tactics in the air struggle against the Western Capitalists.
In North and Central sectors, strong groups of air superiority fighters were assigned, assisted by smaller groups of MIG-21 used to overstretch NATO's air forces.
In the South sectors, Hungarian air units with a small Soviet complement were expected to force the Italians to give up the control of their air space.

It wasn't a good decision.
At sunset of May 6 (D+3) Warsaw Pact held Air Superiority in the North and South sectors, but in the centre American F15 and F4 emerged victorious, opening up a corridor for REFORGER airlift.

Moreover, MIG-21 and MIG-23 losses have been even higher than the previous days, up to the point of questioning Pact's capability to contest air control in the near future. Every airfield in East Germany was littered by damaged or inoperable aircraft, well beyond ground crews' repair capabilities, plagued as always by a spare parts shortage.

In preparation to the assault on I Belgian Corps' positions in Hannover, 3rd Shock Army requested a special forces assault on the Dutch Hawk SAM batteries located 30 km West of the city.
The assault was carried out by 3 Soviet and 1 East German Spetsnaz units and went bad since start. Due to a probable information leak, 4 MI-6 were shot down during the approach phase and the attacking commando was welcomed by 100 West German Police agents and mixed Military Police units, supported by a couple armored vehicles.
After 2 hours of firefight, the whole assault force was killed or forced to surrender without being able to damage the Hawk batteries. 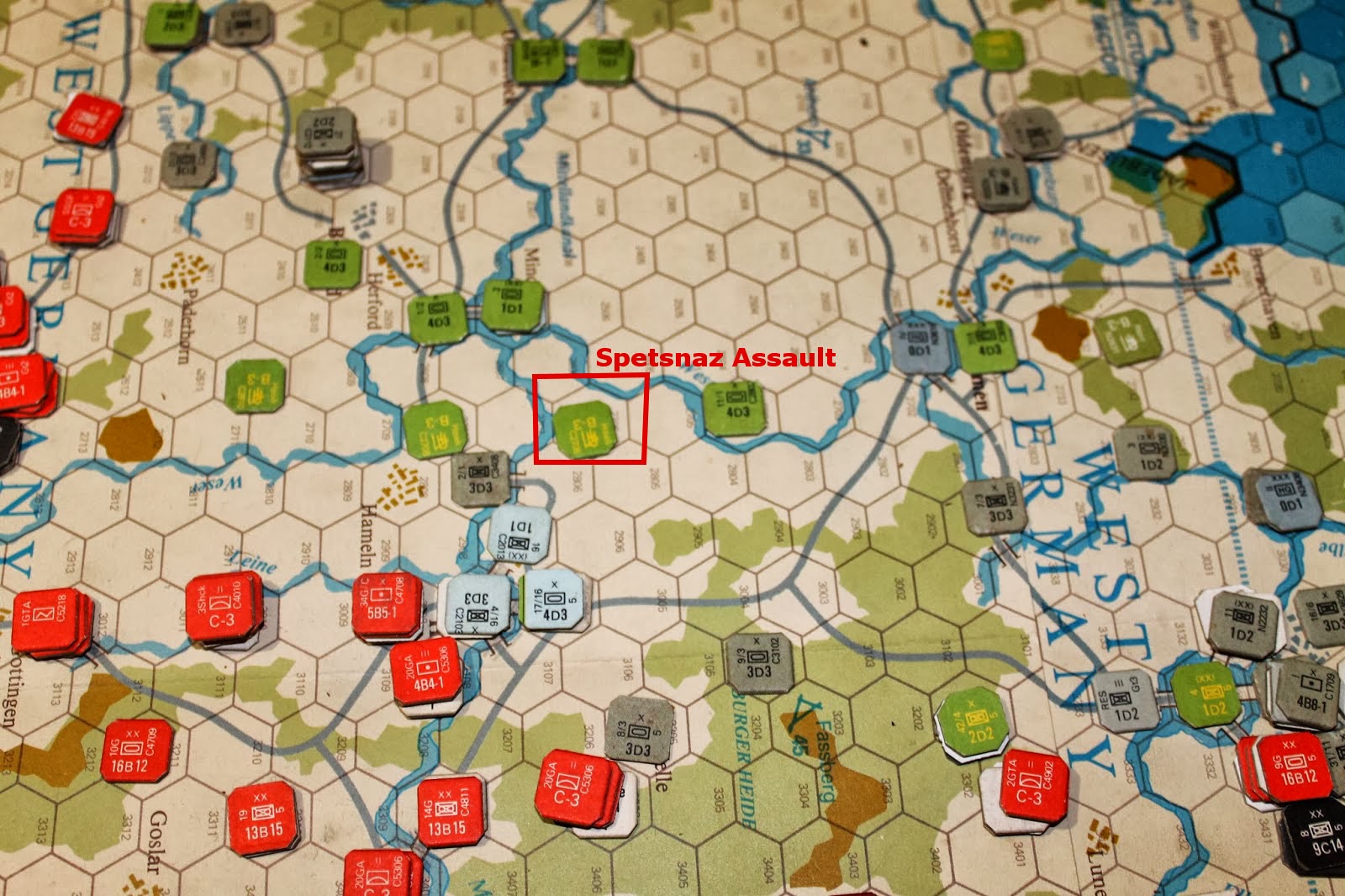 In order to support 1st Guards Tank Army advance toward the Ruhr, 76th Guards Airborne Division was transported to Bottrop, 30 km behind German III Corps Main Battle Area, by helicopters flying in NOE mode. The division had just the time to consolidate before several American Cobra helicopters attacked its positions,inflicting moderate losses. To prevent further losses, the remaining Cobra assault helicopter were quickly grounded by a coordinated SSM-delivered chemical attack on their airports.

At the end of the battle, the whole area around Nuremberg had been contaminated by persistent chemicals. In an official declaration released at 22:00, May 6 (D+3), Warsaw Pact spokesman Major -General Yuri Lebedev declared that "in the previous days NATO refused our offer to declare Nuremberg Open City. This ill fated decision brought suffering to the same German citizens NATO declares to protect, and caused the almost total destruction of one of the finest cities in central Europe."
Further South, the Hungarian Army entered Munich, but failed to dislodge the 1st mountain Division Base defending the center of the city. Due to accumulated fatigue and NATO opposition, the whole Army get bogged down around Munich.

Comrade Marshal Viktor Kulikov was not in his best mood.
As Supreme Commander of the Unified Armed Forces of the Warsaw Treaty Organization, he had very few reasons to be happy; should he get a vodka every time bad news arrived on his desk, he would have spent the last two days drunk.

Since the beginning, the disgusting Polish defection and the Czech revolts undermined Operation Attila timetable. Now, after 48 hours of combat, even more serious problems arised.

For example the damned NATO helicopters, with their ability to infiltrate even in areas heavily covered by SAM and flak defense systems, with little or no losses.

Hamburg was another problem: the 2nd Guards Tank Army was unable to quickly occupy the city center, giving 11th West German Division enough time to dig in and prepare for a rough defense.

But the biggest worry was the situation assessment he received from Colonel-General of 16 Vozdushnaya Armiya, Vladimir Fedorovich Korochkin. "He has his tongue so deeply stuck in Brezhnev's ass he probably knows what the General Secretary ate this morning", Kulikov thought while taking another cursory look at the 15-pages report.

Beyond bombastic words and stale propaganda, the harsh reality was hidden in a small chart at page 14: during the first two days of combat for air superiority over NORTHAG and CENTAG areas, more than 12% of the available Mig-21 and Mig-23 fighters had been shot down or damaged beyond repair.
Even counting the new reinforcements arrived, the net loss in air to air combat power was at 10%, with NATO reported losses not even remotely comparable. Moreover, the Westerners were able to keep an air corridor to Southern Germany and Italy open, meaning that several dozens of F4s began pouring down from United States into the Central Europe battlefield.


The strategy used in the air fight over Germany was saturation: wave after wave of small Mig-21 groups had to constantly engage the dangerous F-15 and F-4 combat groups, forcing them to stay in combat almost without interruption. When attrition begin to take its toll, stronger Mig-23 and Mig-21 attack groups would give the final punch, acquiring air superiority.
It worked, but at a much higher cost than imagined, and apparently NATO's repair and maintenance capabilities were better than expected.

In other words, should everything remains unchanged, Warsaw Pact Air Forces will become useless in 6 days, 7 at best.

"Six days.....six days. Is that enough, or we will find ourselves half-way to the Rhine, with the head stuck in a bee hive and the supply lines cut down? Why we don't have something like that F15? How hard can it be to design a decent fighter, when you have all the motherland's resources at your disposal?"
Kulikov dropped the report and lifted the phone. "Call me Korochkin, 16 Vozdushnaya Armiya. I want him sober and on the phone in 10 minutes."

After two hours sleep, Sergeant Arkadiy Sidorov woke up when a burst of 155mm shell exploded less than 200 meters from the small building they used to take some shelter for the night.
He stood up as fast as he could, checking for damage or casualties, then looked down at his hands; the trembling hasn't stopped.

It started at the sunset of the day before, while his tank platoon was approaching Hamburg outskirts. Things went relatively well until then - just some skirmishes with German covering forces retreating toward the city, and only one tank damaged by a lucky artillery shot.
As they were closing to a small village just outside Hamburg, 3 of their 13 T-72 were hit by something. One exploded in a fire column, hurling the 11 tons turret 100 meters away, while the other two simply stopped and started smoking from every hatch. "Milan missiles!" he thought, ordering evasive maneuvers to his driver. 30 seconds later, the company commander was hit; goodbye to Lieutenant Kholodov and his crew.

They weren't even able to detect the defender's strongpoints to call in artillery support. Now, he was in command of a T-72 company, with 8 tanks left, his right hand shaking and the perspective of a new day of combat in the street of Hamburg.

He woke up the rest of his crew and placed himself in front of the radio, to get orders from the Battalion's HQ.
a 12:09:00 2 comments: