The Next War 1985 - Operation Hand of God with Command

We're working on a revised The Next War scenario set in 1985, more or less 5 years later than the original ones.

Five years could seem a very short time, but there was a lot of changes during that period. Ronald Reagan became President of the United States, and Margaret Thatcher was Great Britain's Prime Minister.

I'm sure a lot of people have a lot of different ideas about these two political figures, but from a purely military point of view they made the difference. They marked the end of the so-called Detente diplomacy and started (Reagan in particular) a heavy program of rearmament to face USSR "Evil Empire".

In 1985, after four years of Reagan's presidency, US Army forces had upgraded their M-60 and M-113 to M-1A1 Abrams and M-2 Bradley, had a good number of the new Stinger SAM missiles, and had finally recovered from the "Vietnam Syndrome". US Air Force had been modernized, its tactics revised, and was ready to face the final phase of the Cold War. US Navy had acquired new vessels to reinforce AFCENT in case of war, and new POMCUS sites had been established in Netherlands.

Obviously there's a lot of things to change in game terms: order of battles, reinforcements, equipment upgrades and so on.

One of the main points to quantify is the 1985 technology gap between NATO and WP and its effect on the battlefield. To have an idea of this last point, I've used Matrix Games' Command to simulate a typical "The Next War" situations.

I presume at least some of you know "Command": an air / naval warfare simulator taking its roots from "Harpoon", but more advanced. For example, while Harpoon simulates the air launch capacity of a USA CV numerically, Command incorporates all the single elements: internal lifts and their max load, Air Boss skill, number and type of catapults, bridge occupation and so on. The air launch capacity of the CV is simply the result of using all these.

The scenario background is taken from our game's "Operation Hand of God" , an operation launched by NATO at D+9 to interdict / destroy WP supply lines.

I prepared two scenarios: the first set in 1980, the second in 1985. Both scenarios use the same background, same attack plan and more or less the same forces, only updated to their more recent version for 1985.


In both scenarios, WP advanced to the Bremen - Osnabruck - Paderborn line, and is using the Osnabruck - Hanover - Brunswick - Magdeburg autobahns as its main supply line; the NATO raid takes off from Netherlands, with the objective of bombarding the supply installations in Magdeburg area.

NATO raid has the following composition:

Since the start, Chief1 radars detects previously unknown SAM mobile sites of the Soviet Army. They will be marked as "hostile" soon. 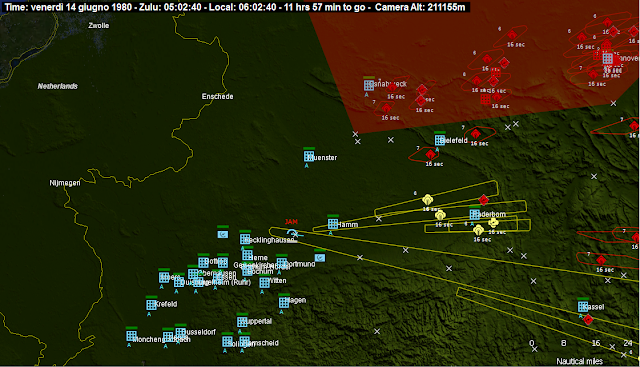 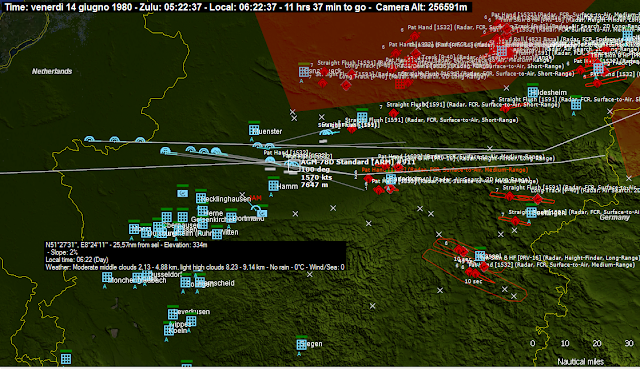 At 05:29 ZT, SEAD3 has destroyed almost every enemy radar in Padeborn area and begins returning to base. SEAD1 and Iron1 missions can fly thru the area without problems. 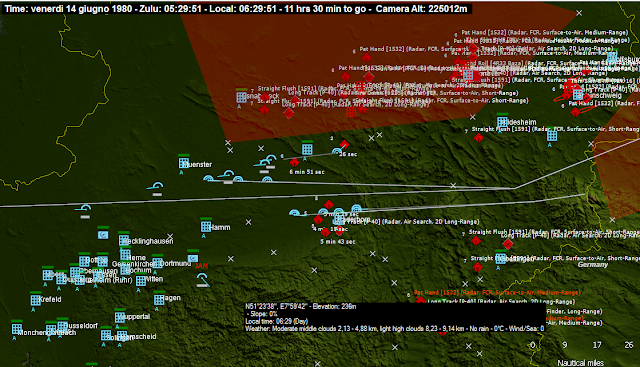 At 05:30 ZT, Soviet Army SAMs South of Padeborn acquire NATO planes and launch a missile salvo against them, downing an F-4G. 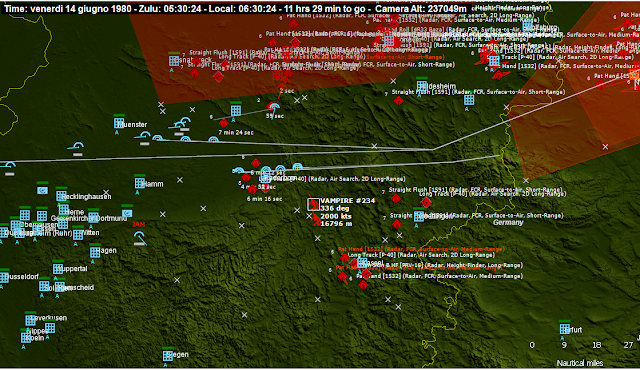 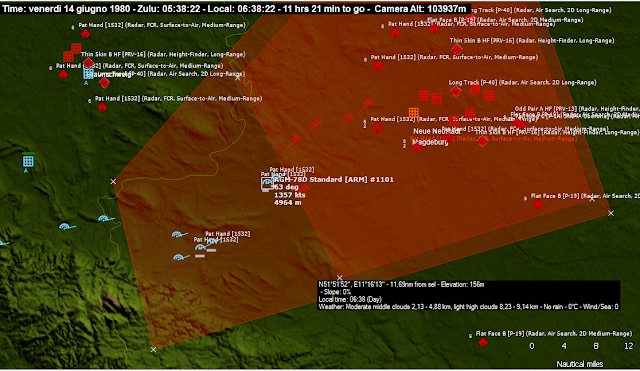 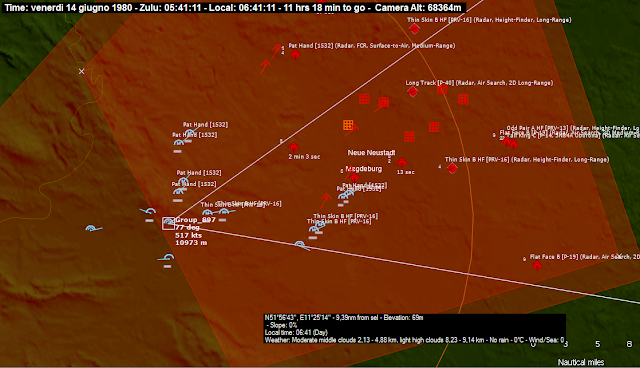 At 05:46 ZT, almost every WP radar system in Magdeburg area has been destroyed, at the price of another F-4G downed. 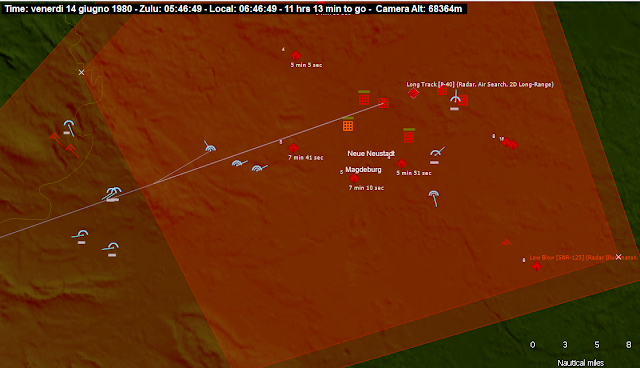 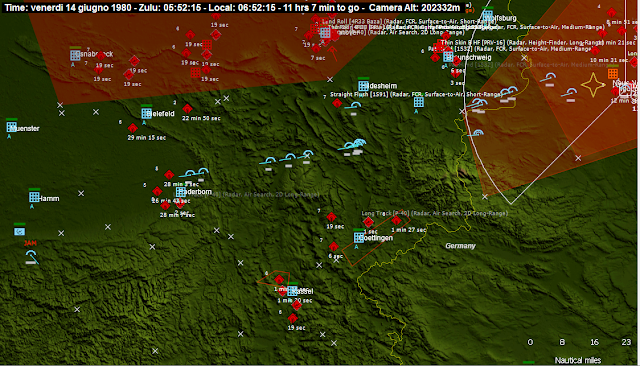 The raid was a success, destroying almost every supply objective in the assigned area, even though the cost for NATO was quite high (5 planes, 20% losses).
Overall, my feeling is that the results are more or less in line with what happened in "The Next War"

The 1985 scenario unfolded more or less like 1980 one, but the EF-111 Raven supporting SEAD1 and Iron1 mission made a big difference in terms of NATO losses. Only a single F-4G was downed, and most of WP missiles were running blind after launch due to the powerful ECM emissions of Raven1.

Email ThisBlogThis!Share to TwitterShare to FacebookShare to Pinterest
Etichette: Command, Operation Attila, The Next War


As requested, a detailed report of the recent events in Arnhem area follows:

Here we are again, with Warsaw Pact momentarily (I hope) slowed down by critical supply problems.
Meanwhile, second echelon Divisions started entering the battlefield, and there's A LOT of them.


The Hand of God Hits Again

Warsaw Pact land operations were heavily disrupted by the continuation of NATO's "Operation Hand of God".

Warsaw Pacts air defenses were able to shot down or damage a good amount of the attackers, but not enough to avoid the collapse of the supply system. During the last 48 hours, only South Front (Munich - Nuremberg area) and 2nd Guards Tank Army (Hamburg area) received enough fuel and ammunition to continue the offensive at the desired pace.

As a consequence of the current unsatisfactory situation, Vice Commander of Group of Soviet Forces in Germany Colonel General Alexei Lizichev has been recalled to Moscow to report. His role has been assigned to the Marshal of the Soviet Union Sergey Sokolov, who previously served as Commander in Chief of Soviet Forces in Afghanistan.

Under Marshal Sokolov directives, WP air defenses deployment was completely revised in the last 24 hours, emphasizing the concept of key areas defense and dropping the "multiple supply lines" strategy that proved so ineffective.

In Denmark, 106th Guards Airmobile Division attack against Copenhagen was held off by Danish defenders, primarily thanks to the support of a West German attack helicopters squadron that was subsequently forced to land at Vaerlose airfield, just North of the city.

In the Bremen / Oldenburg region, 20th Guards and 3rd Shock Army completed encircling the remnants of German I Corps. A couple of reconnaissance attacks against NATO defensive positions were repulsed due to a WG artillery regiment supporting the defenders and supply problems.

As usual, nothing new on the CENTAG Front. 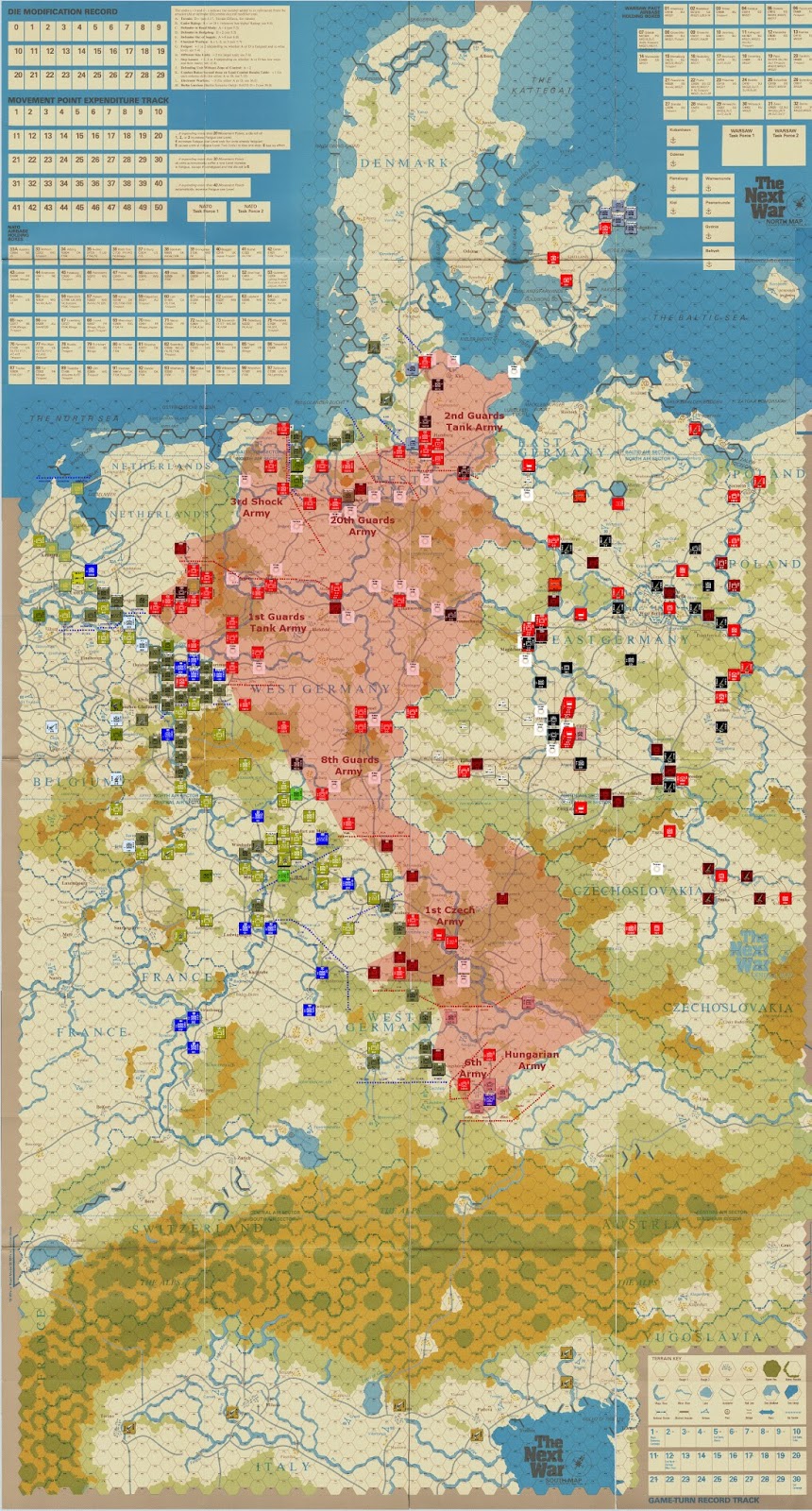