Here's the list of the scenarios you will find in the C3 Module 3 - Die Festung Hamburg, each one with a brief introduction and a situation map.

The basic premise used in the whole series is that Warsaw Pact was able to obtain a certain level of operational surprise.

This makes the situation in the North German Plain sector particularly difficult for NATO, as most of its forces come from the Dutch and Danish armies, both heavily relying on reservists and needing several days to be fully operational. To make things even worse, the Dutch I Corps is stationed in the Netherlands. In the end, during the first critical hours the whole sector must be defended by two West German divisions, supported by one Dutch and one US brigade.

On the opposite side, Warsaw Pact can commit between 9 and 12 divisions, depending by the STAVKA strategic decisions. Luckily for NATO, several of them have a below-average quality and equipment but despite that, they are there. 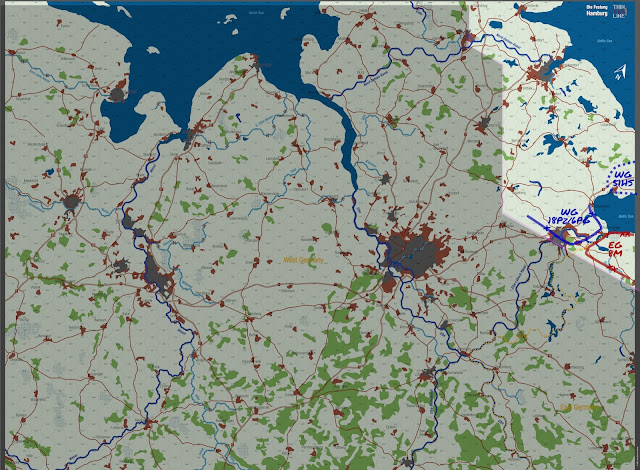 Despite the unfavourable terrain, the estuary of the Elbe - Lübeck canal  is a primary objective in the first hours of the Warsaw Pact offensive in Europe, as once it has been crossed NATO has little or no chance to establish a robust defense line before Kiel, 60 km to the North. The task is assigned to East German 8th Motorized Rifle Division, reinforced by heavy artillery support and having an amphibious regiment as an ace in the sleeve.

West German 18 Panzer Brigade, reinforced by 6 Division Recon Battalion, is charged with the defense of the sector. The brigade had just a few hours to assemble and organize and as a result only two battalions are in the Forward Edge of Battle Area when the hostilities begin. The Brigade Commander must immediately take a hard decision: Defend the canal with the few troops available and risk being destroyed on the border, or adopt an in-depth defense and allow the enemy to easily cross the difficult water obstacle.

Whatever the choice, the Eastern and Western brothers are going to meet very soon, in the worst possible terms. 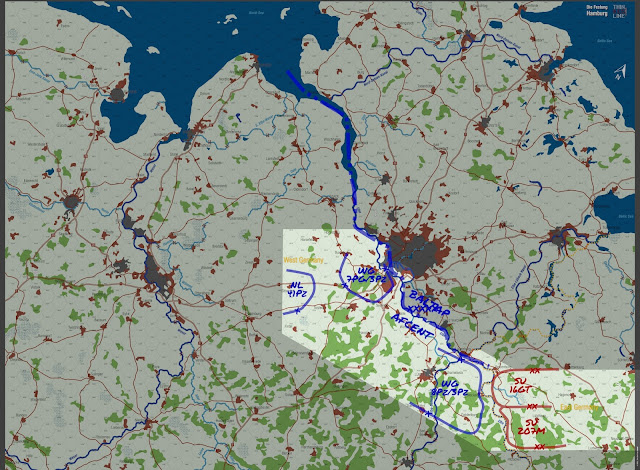 Warsaw Pact’s main effort in the Hamburg sector is Operation Latvia, bearing some resemblance with the German Fall Gelb operation against France and having the final objective to cut out Hamburg and continental Denmark from the rest of Western Europe.

Unsurprisingly, the task is assigned to Soviet 2nd Guards Tank Army, the most powerful formation in the sector, with a first echelon composed by two divisions, additional front-level artillery, and 38th Guards Air Assault Brigade. The orders are to break through the NATO lines at the junction between NORTHAG and BALTAP areas of responsibility, advance along the West bank of river Elbe, and reach the North Sea near Stade.

The attacked sector is theoretically defended by the combined West German / Dutch I Corps, with a total strength of three divisions, but the Kremlin’s maskirovka partially worked out and NATO has lost precious hours. As a result, most of the two Dutch divisions are still en route or mobilising and only a couple of West German brigades are actually ready to face the Soviets.

Scenario 3 - A Pact of Blood 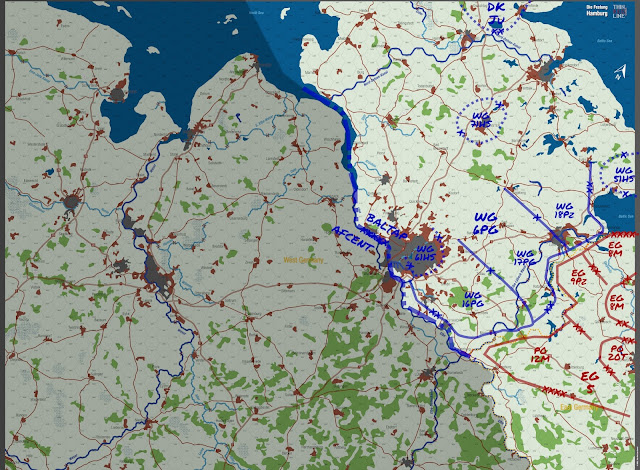 Cutting the NATO’s access to the Baltic is one of the primary objectives for Warsaw Pact Northern Front.

STAVKA has assigned considerable forces to the task, with three East German and two Polish divisions ready to cross the Inner German Border at July 24, 0600 Zulu Time. What these divisions lack in quality is compensated by artillery, air support and of course sheer numbers.

On the opposite side, the combined Danish / West German LANDJUT Corps is far from being ready to receive the blow: The Danes are still mobilising and cannot be expected before D+1, while the UK Mobile Force needs at least two days to reach its expected disembarking port at Brunsbüttel.

Only West German 6 PanzerGrenadier division and a Territorial brigade are available to slow down the assault in the first crucial hours, with two additional Danish brigades arriving from midnight. War has just started, and  the LANDJUT Commander already has some life-or-death decisions to take.

Scenario 4 - The Roaring Sound of Doom 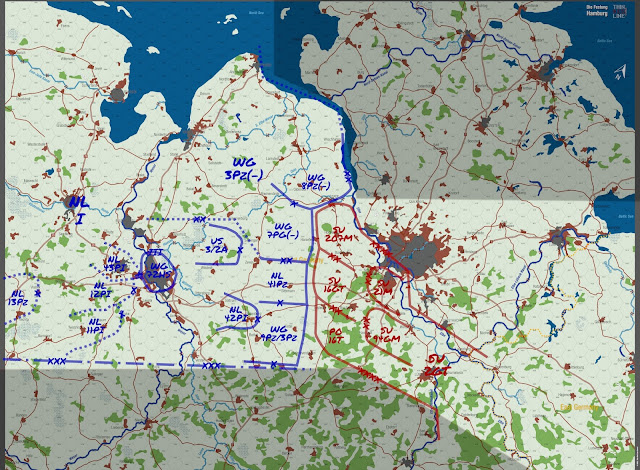 Phase One of Operation Latvia went well for Warsaw Pact: Two days after the start of the offensive the first echelon divisions from Soviet 2nd Guards Tank Army control the West bank of river Elbe, cutting out Hamburg and the BALTAP sector from the rest of the NATO forces. Phase Two is planned to follow immediately, and  the army’s two fresh divisions are ordered to spearhead the attack and reach the river Weser.

On NATO side, West German 3 PanzerDivision had to defend most of the sector alone for the first 48 hours, paying a heavy tribute in blood for that. The Dutch brigades and artillery are now finally getting into position, and the NORTHAG Commander can hope to stabilise the front, reorganise the most battered units, and stop the Soviets before they achieve a breakthrough. 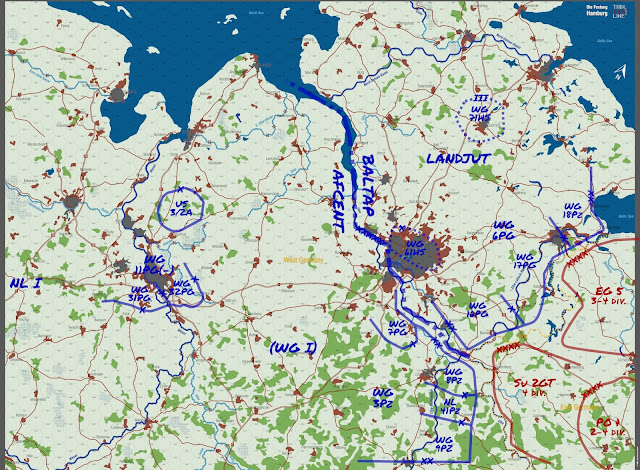 On June 8th, 1985 General Secretary of the Soviet Communist Party Mikhail Gorbachev is deposed by a military coup. A State of Emergency Committee, formed by Kremlin hardliners and presided by Andrei Gromyko, takes power in Soviet Union.

Tension between the two Blocs increases sharply, reaching alarming levels after mass protests in several Warsaw Pact countries are suppressed by local Soviet forces. Interpreting these events as a covert attempt by capitalist forces to bring the Socialist System to its knees, the new Soviet Politburo decides to play all its remaining cards and starts mobilising Class II and III Divisions.

NATO diplomatic attempts to defuse the conflict receive reassuring answers about Soviet Union’s desire for peace, not supported by any change in Warsaw Pact’s troop movements.

In the end, the last supporters of the diplomatic approach surrender to the harsh reality when faced dozens of satellite photos irrefutably showing Warsaw Pact Armies moving in attack formation toward the German Inner Border.

Campaign 2 - One Minute to Midnight Following June 1985 military coup in Soviet Union, tension between the two blocs keeps on increasing despite several attempts by both sides to defuse the situation.

In July, Soviet Union’s State Emergency Committee decides to reaffirm the Brezhnev’s Doctrine by brutally crushing a Polish national strike and leaving hundreds of dead civilians in Danzig and Stettin.

Media and popular pressure force Western countries to declare an embargo on Soviet Union. The Kremlin reacts by denouncing “a perfidious attempt by capitalist powers to strangle the Socialist Countries” and by mobilising Category II and III Divisions.

In a matter of days, DEFCON is raised to level 2 and several NATO countries begin the mobilisation process.

To show NATO determination, a Task Force centered on British Carrier HMS Invincible is dispatched to Norwegian Sea. On July 23rd, NATO and Soviet forces in the area are involved in increasingly dangerous confrontations. At 2014 ZT, a Soviet P-270 Moskit missile armed with a 200Kt nuclear warhead sinks the HMS Manchester, killing more than 300 seamen. The Britons react on similar terms, with a Buccaneer nuclear strike on Soviet destroyer Kulakov.

From that moment on, the situation goes out of control. On July 24th, 1985 Warsaw Pact forces launch a major offensive against West Germany, with unrestricted chemical and nuclear warfare. A fully mobilised NATO reacts on similar terms, and the worst nightmare of 20th Century becomes a reality.