Our Graphic Designer Eleonora Olivares has just released the first draft of the box art for the upcoming Cold-War-Gone-Hot game "1985: Under an Iron Sky".

Eleonora never worried about T-80 Main Battle Tanks or SA-6 Air Defense Systems in her whole life, so she had to learn almost everything from scratch. I hope she'll be soon able to identify tank model, variant and parent division just by looking at a blurred photo.

Here it is! Before you wonder why the overall tone is so bleak, I wanted it that way :) 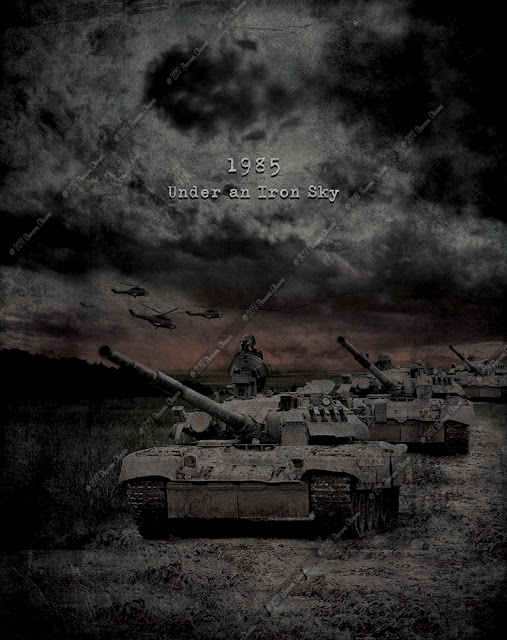 The Northern part of the map is now almost finished!
We are going to add some geographical / landmark labels, but not sure about how many.

As most of us are not getting younger, we've tried to use an appropriate font size....please feel free to leave your opinion / comment / suggestion here, it's not too late to accept some good advice :)

Here's the AAR for the third playtest session of "Mind the Gap" scenario, included in the upcoming "1985: Under an Iron Sky" monster game.

The first two playtest sessions were useful for adjusting and fine tuning some rules. At the third run, we were able to complete the scenario with no change to the rules / OOB and such.

The scenario depicts Warsaw Pact's secondary attack along the Fulda - Kassel - Frankfurt axis. Soviet 8th Guards and 1st Guards Tank Army, supported by East Germany III Military District, are tasked to engage US V and West Germany III Corps, inflict as much casualties as possible and prevent NATO from dispatching any reinforcement to NORTHAG, where the main Warsaw Pact thrust is taking place.

Counters for the playtest are home printed, using the same graphic that will go in production. Of course, the overall quality is lower as they are the result of a painful "Print-Glue-Cut-Aaaargh they're not aligned" hand-made process.

The map isn't ready yet, so we had to use the old The Next War map, using State of the Art Technology (i.e., a pencil) to add several airports, urban areas and missing special features.

Both sides have the possibility of moving their units before war outbreak. NATO allowed movement is based on a 24 hours warning, obtained by analyzing HUMINT and SIGINT data.

The weather is good, so no problem for Air and Helicopter missions.

Warsaw Pact assigns 7 Mig-23 and Mig-21 Air Groups to Area 1 and 3, while NATO uses 3 of its precious Air Squadrons in Area 2 (with an AWACS squadron in support) and 3 more in an attempt to contest Air Superiority in Area 1.

Air Superiority over areas where the main thrust will take place allows WP to use its attack helicopters and air squadrons with little or no risk of being intercepted. The opposite is also true: NATO air assets may be used only by taking additional risks and casualties.


NATO answers with a West German Ground Strike mission against Brand Airfield (C5212, near Cottbus), executed by 2 Tornado squadrons escorted by 2 F4F. Soviet SU-24 and Mig-23 squadrons intercept, but they are unable to stop the strike and Brand airfield is heavily bombed and damaged. Another Ground Strike by WG F104s hits Altenburg Airfield.
Lessons Learned: It is now clear that NATO is able to hit WP rear areas pretty hard even in the first 48 hours of war. Warsaw Pact must take appropriate countermeasures since the beginning, as most of its repair capacity is needed to keep the supply routes open and does not allow the allocation of time and resources to damaged airfields.

WP gains Air Superiority over the main battle line, despite an attempt by NATO to contest it around Wurzburg. On the other hand, NATO wins a vital Air Superiority over the area between Frankfurt and river Rhein. Thanks to that, CONUS air squadrons and REFORGER ground units scheduled for turn 2 will be able to arrive by airlift and reinforce NATO front line in a few hours.
Warsaw Pact conducts two all-out assaults towards Wetzlar and Kassel, and succeeds in both thanks to heavy air and helicopter support.

NATO sends out 3 different ground strike missions with Tornados and F104s to slow down the Soviet 28th Corps arriving as reinforcement and damage the advanced heliports used by Soviet Mi-24. In the rear areas near Wurzburg, US 3rd Mechanized Division recombines and waits....

During the Land Movement Phase, three Warsaw Pact divisions attack WG 15/5 brigade near Marburg, with both sides using everything at hand. The attack fails, primarily because of NATO Air Superiority over the area  allowing air and helicopter squadrons to support the defender effectively.

Lessons Learned: A ground attack without Air Superiority against well-placed defenders is probably doomed to fail, unless the defender has no available air / helicopter squadrons to call in for ground support.

Following the rule "never reinforce a failure", Warsaw Pact throws its remaining divisions against WG 34/12 brigade defending the South sector near Schweinfurt. NATO is now short of aircraft and helicopters, and the defense collapses after a few hours. Two additional Soviet Divisions exploit the breakthrough and are now 30 km from Wurzburg.
At this point, NATO launches its counterattack using every possible force multiplier.

With NATO F-16 and AWACS in Air Superiority and little risk of being intercepted by WP fighters, an F-4 Wild Weasel Mission disrupts WP flak in the Schweinfurt area. Shortly after, three US Special Forces battalions assault and destroy the Electronic Warfare unit supporting Soviet 31st Tank Division, paying with their lives but leaving the Soviet Division without any kind of help.

At this point, WP player concedes victory to NATO.

Actually, at the end of turn 3 the game was a Draw.

Considering that in the last 2 turns NATO will be reinforced by 9 more brigades (mostly WG territorials) and 6 more US Air squadrons and that most of them would have been sent to NORTHAG thanks to the stalemate of the WP offensive toward Frankfurt, the result at the end of turn 5 would have been a NATO marginal victory.

The base terrain of the North Map Section for 1985: Under an Iron Sky is ready!
The map was created using L3DT, a terrain-generation application, with a few finishing touch added with Gimp.