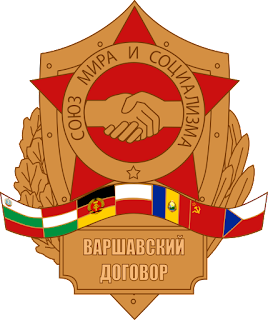 As stated in 1985: Under an Iron Sky Designer's Notes, Warsaw Pact faces a hard task. NATO is strong and becomes stronger quickly, so it's imperative for Warsaw Pact to seize the initiative and keep NATO off-balance as long as possible.

No matter how good a player is, he will probably find himself in trouble when playing Warsaw Pact for the first time. The interactions among the various elements of a full-scale modern conflict could be quite difficult to grasp at the first attempt, so it's possible (actually, probable) for Warsaw Pact player trying to simplify what is actually a complicated problem: how to break NATO defenses and keep his opponent constantly reacting to emergencies.

In this Field Manual, I'll try to describe typical operational situations Warsaw Pact will find, and how to face them. Of course not every problem has necessarily a solution, and in some cases the capitalist defenses could simply prove too strong, no matter the amount of Socialist Effort produced to break them.

Warsaw Pact does not have enough forces for pushing along the whole front. Warsaw Pact Commander must therefore choose a limited number of areas where to concentrate overwhelming forces of all available kinds: Motorized and Tank Divisions, Attack Helicopters, Electronic Warfare, Air Support, SSM, Artillery, Combat Engineer and Flak.

All of this forces, acting as a Combined Arms Group, will be needed. Should one of the main attack axis have no Electronic Warfare or too few Artillery, it could be unable to achieve a significant break through.

Special Forces could also help against the strongest defenses, so don't waste them against secondary targets. Do not hesitate to sacrifice them to destroy an Electronic Warfare or Artillery unit.

In order to achieve this, WP Commander must plan in advance.

As stated in the Designer's Notes, attacker should achieve at least a 5:1 combat ratio, but Combat Modifiers are the real key to a successful attack.
For any important assault, Warsaw Pact Commander should try to achieve a 7:1 ratio with 3 Combat Modifiers in his favor. Anything less will risk to bog down the whole offensive axis and force him to find other solutions.

In order to obtain this prerequisite, forces must be assigned in relevant number. Detailed descriptions of possible scenarios are given in this Field Manual, but some prerequisites always apply:

Once a Breakthrough has been achieved, WP Commander should exploit it at fastest possible speed in order to obtain two results:

There's no real geographical objective or position that must be taken immediately in order to achieve at least a Military Victory. Advancing deeply in West German territory, isolating NATO strong-points and finish them off later with second echelon forces could be enough in most cases.

Consequently, Warsaw Pact Commander should always attack the weakest spot of NATO defense line. In order to identify them, keep in mind that one of the most dangerous assets in NATO arsenal are Electronic Warfare units.

The following examples will always use the following assumptions:
Assigned attack forces are:
Should Warsaw Pact plans require frontal assaults to positions much stronger than the one used by these examples, please re-read "The Offensive - General Principles". 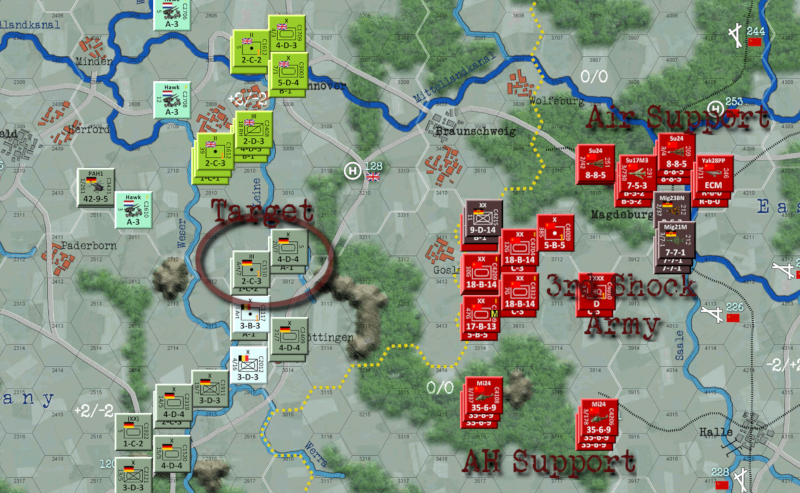 Final objective of the assault is to penetrate enemy defenses and advance toward Weser river. The operation will require at least 4 distinct phases:

To ensure full support from Mi24 Attack Helicopters approaching in NOE flight, the WG A-1 and WG bde D flaks covering the immediate surroundings of the assault area must be suppressed or destroyed.

A SEAD mission is launched, supported by a Yak28PP ECM squadron. Giving the high number of enemy flaks, strike will be composed by 2 groups of 3 squadrons to ensure that at least one squadron per group will penetrate AA defenses.

The 4 surviving SEAD squadrons were enough to completely suppress NATO air defenses, with a bit of luck.

A first artillery brigade is moved in hex 3110 to support both the diversionary and the main assault.

East German 11th Motorized Rifle Division conducts a diversionary attack on the Southern flank. The assault is probably bound to fail, but even in that case it will achieve three results:

A second support artillery brigade is moved in the hex now covered by EG 11th MRD, and 10th Guards Tank Division advances to hex 3111 for the main attack.


As the situation is favorable, 10G MRD decides for a Single Echelon Assault, bringing its attack value to 18 x 1.5 = 27.

Final combat odds and modifiers are:

The forces used in the assault could appear almost as overkill, but even in this favorable situation several things could go wrong:
The final combat ratio ensures a D result. NATO could hold the ground taking 2 step losses, but decides for retreat as WP still has artillery ammunition to use and a second assault would probably have the same outcome.

10th Guards Tank Division now advances after combat, and NATO moves a Belgian Reserve Brigade to cover up Artillery in hex 2913. Exploitation of the Breakthrough may now have several developments. 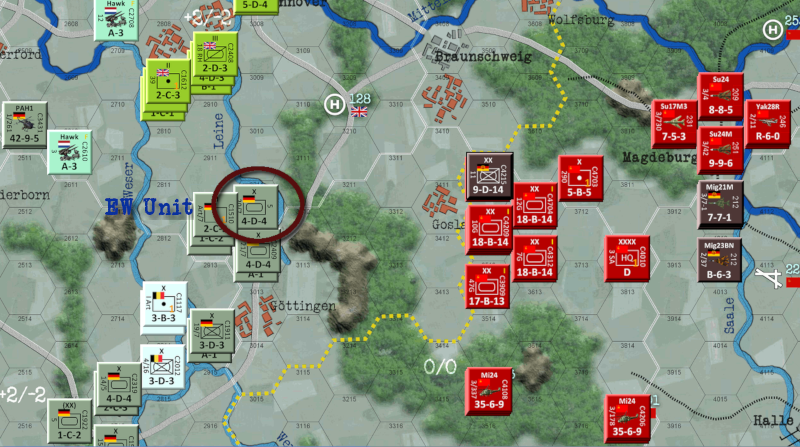 Final objective of the assault is to surround West German troops and support units at hex 2912. The operation will require at least 3 distinct phases:


Both WG Armored Brigades have EW and artillery support, but the Northern one has no attached Air Defense units as NATO does not have enough mobile flaks to cover the whole front. This makes WG 20/7 brigade the chosen initial target despite the minor river, as no preemptive SEAD mission will be needed.

A first artillery brigade is moved in hex 3211 to support both diversionary and main assault.

East German 11th Motorized Rifle Division executes a diversionary attack from hex 3112; the assault is bound to fail, but will achieve three results:

10th Guards Tank Division moves in for the main attack against WG 20/7 Brigade, supported by:
Additional support will include:

A Ground Support Mission is launched before resolving combat, with 9 strike and 1 ECM support squadrons. NATO flak is quite heavy (2xD, 2xC, 1xA, 1xB), so strike squadrons are formed up into 3 Air Groups to better absorb losses.

Attack resolution will have the following scenarios:

10th Guards Tank Division task is now to advance at maximum speed in the breakthrough, in order to close the Western flank of the pincer. Support units will be left behind to help the follow-up divisions during the second phase of the exploitation.

12th Guards Tank Division advances in the breakthrough hex 3011 and attacks WG 21/7 Brigade to close the Eastern flank of the pincer. Once again, support consists in:
As NATO A-1 flak used up all its ammo against the previous Ground Support mission, attack helicopters approaching Nap-Of-Earth will have to face only a single D flak.


Attack resolution will have the following scenarios:

47th Guards Tank Division advances to Gottingen and executes an Assault From March against WG 21/7 Brigade.

The attack has only a slim chance to succeed, but NATO forces are now completely isolated and will have to use Embedded Supply in any subsequent combat.


Even in case of failure, 12th Guards Tank Division may proceed to attack as planned, with WG 21/7 already encircled and low on ammo.


Moreover, it will be extremely difficult for NATO to reopen a supply line to WG 7th Division, leaving the encircled brigades and artillery with a critical ammo level during the following WP Action Phase.

If the Political and Strategic situation allows it (See 26.0, Weapons of Mass Destruction Escalation), chemical warfare is a powerful force multiplier that should be used without restrains.

As chemical agents effectiveness will decrease as NATO troops get used to the protection measures needed to avoid high casualties, the decision of when to start chemical warfare is relevant.

If the initial offensive achieved operational surprise (See 51.1, Turn 1 Surprise),  Warsaw Pact should be able to attack in advantageous conditions during the first 48 hours, even without chemical warfare. In this case, chemical warfare should commence from D+2 (Turn 2).

If only tactical or no surprise has been achieved (See 51.2, Turn 2 Surprise), Warsaw Pact Commander may consider to use chemical warfare since the beginning of hostilities.

Nuclear warfare is an option to be evaluated carefully, despite its apparent advantages. NATO has powerful nuclear capabilities and is fully prepared for its immediate use on the battlefield.

Moreover, Warsaw Pact typically offers more paying targets for a nuclear strike than NATO due to higher troops density on the Forward Edge of Battle Area and beyond.

Therefore, nuclear weapons should be used only as last resort or as a consequence of orders by the Warsaw Pact Joint Command.

GRU Special Forces are an important asset for Warsaw Pact Front Commander and should not be wasted against secondary targets or risked in ill-conceived operations.

The simple fact of having special forces ready to be employed forces enemy troops to protect vulnerable assets from a possible assault, thus depriving troops on the front line of precious AA and security assets.

Should a valuable opportunity arise, the Front Commander should not hesitate to employ his available special forces aggressively, even at the risk of losing some of them.

Primary targets for Special Forces operations are, in order of priority:

As you will see by the map, the 60 Miles the title is referring to are the approximate distance between Fulda and Frankfurt am Main.

The game will have some contact points with NATO: Division Commander and Central Front, but will try to avoid the high complexity of the first and the excessive abstraction of the second. Final rules should be about 20 pages and a single turn should take no more than 15 minutes.

The main goal is to focus on several key concepts of modern mechanized warfare that are typically elusive or neglected in a war simulation:

Moreover, Less than 60 Miles should be the first of a series of C3 modules, covering not only different areas but also different conflicts. Yes, this means that the idea is to have the whole West German front covered and playable in a gigantic, unmanageable, mind-blowing campaign.

Project state of advancement is:
For now, that's more or less all I can tell.

Now, some snapshots from the Vassal module we're using for defining / testing the rules. Please note that counter art is just for testing, we will do better before going into production ;)