Marshal Nikolai Ogarkov stared at his cluttered desk for a couple of minutes, trying to elaborate a course of action. He feared this moment would have come since Operation Attila's start, but kept hoping his evaluations were excessively pessimistic.

Supply consumption for front line divisions had been at least double than expected. The whole offensive now has to draw supply from rear depots in Poland and Bielorussia, using the fragile DDR railroad network.

This would have been a manageable problem if that pompous ass of Korochkin had kept its promise to "achieve and maintain air superiority in the main effort area for as long as necessary", but of course he screwed up. Except for the first day, air superiority had always been contested everywhere, and NATO air strike missions grew exponentially in the last 24 hours.

"Very well," he thought "There is no other way. NATO deep strike bombers have to be stopped, no matter the cost."

The result was a chaotic furball over Northern Germany, with hundreds of WP fighters trying to intercept NATO fighter-bombers. WP Losses were heavy beyond any possible comparison, with approximately 1/3 of NATO airplanes shot down, damaged or forced to abort.

In the end, Warsaw Pact airplanes were wiped out from Central Sector with heavy losses.

From a strategic point of view, Warsaw Pact air force ceased to exist at the dawn of D+6. Fighter losses are up to 40 - 50%, and without their support bombers will be probably unable to penetrate NATO air space.

Pact's air force is surely still able to put up a fight, but not to seriously contest air superiority held by Westerners.

NATO has also paid an heavy price, but retains a substantial capability to perform deep strikes into WP rear areas. In the next few hours we will discover if that's enough to effectively block the supply network running through East Germany.
a 12:31:00 9 comments:

The Rout of NORTHAG

With British Army of the Rhine virtually destroyed, Dutch I Corps refusing to fight and Soviet units West of the Weser, NATO's North Army Group began to rout.

The two minus German Division defending Hamburg avoided encirclement by retreating through the 30 km corridor between North Sea and Soviet advanced divisions. After escaping, they regrouped around Bremen and Oldenburg.
The defense of Germany's biggest city is left to a mixed force of Danish troops and local German reservists.

The 50 km front between Oldenburg and the MittelLandKanal is left practically unguarded, leaving Warsaw Pact a possible exploitation route to reach the river Ems. 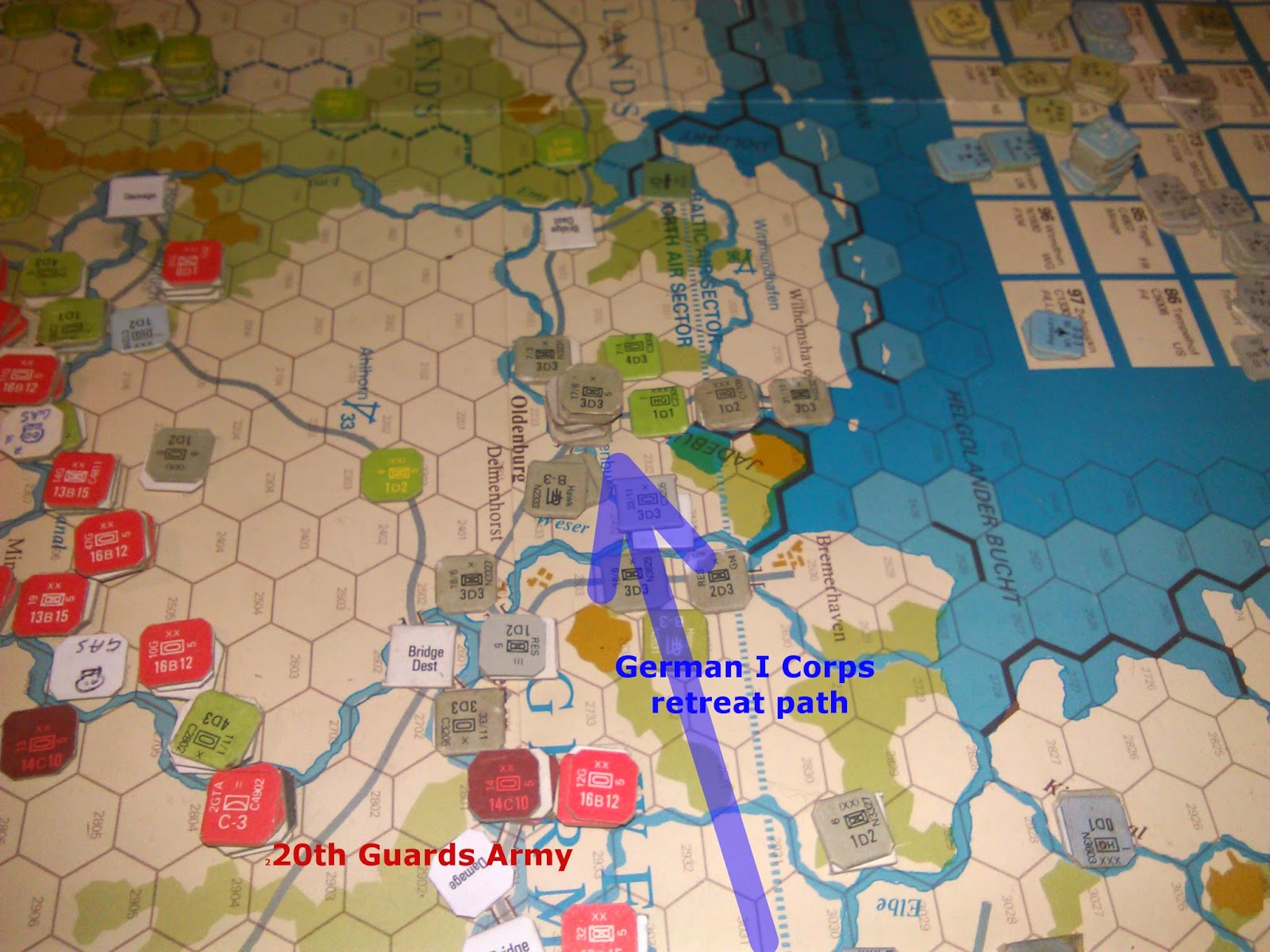 In an attempt to stabilize the situation, German 12th Armored Division moved from CENTAG to an area West of the Ruhr. At the same time French I Corps moved 30 km North, probably to be used as main front line in the next days. 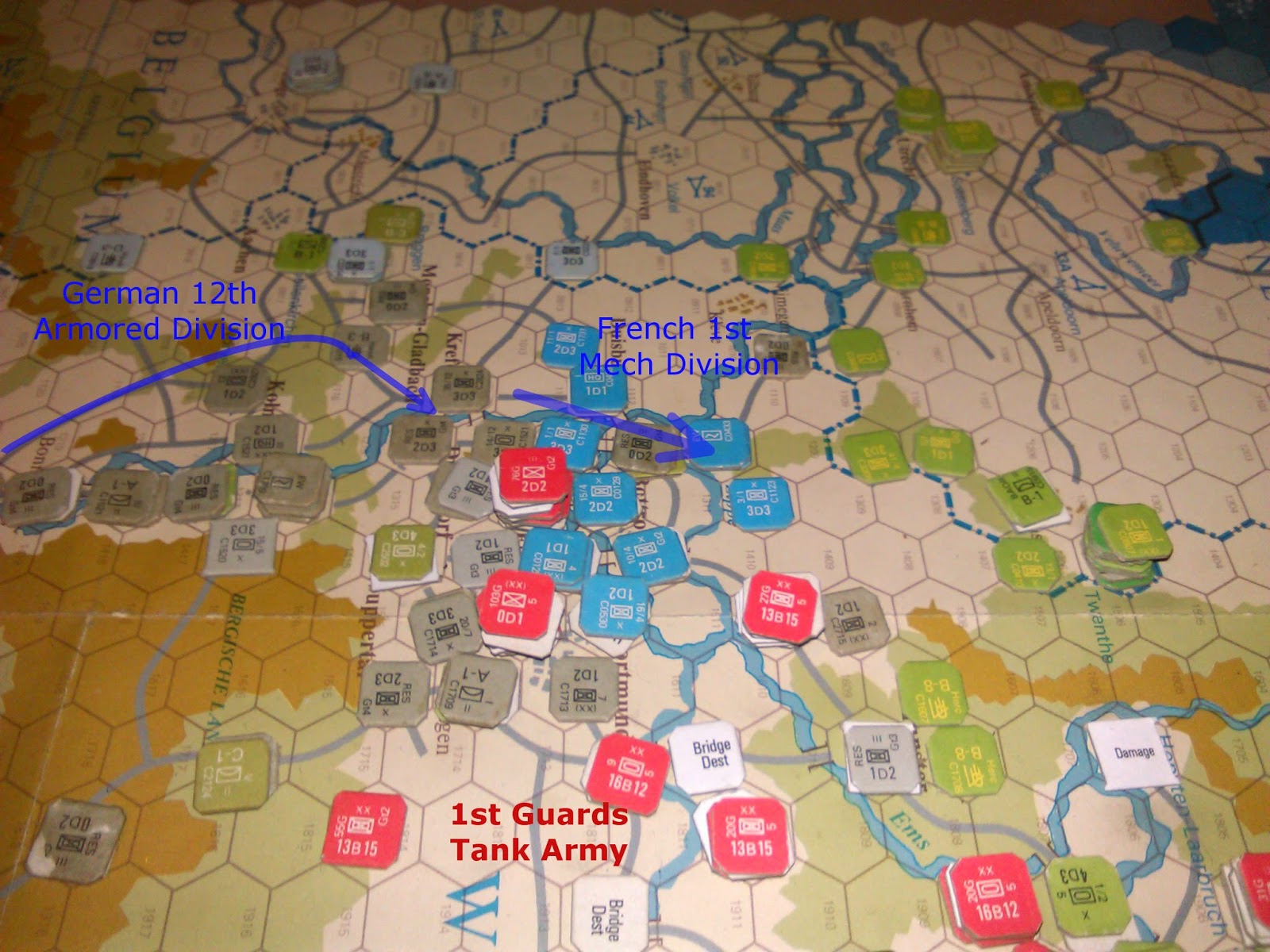 With the departure of German 12th Armored Division, US V Corps extended its area of responsibility further North. Also, Soviet HUMINT sources suggest that US 3rd Armored Division is regrouping around Wetzlar and assuming an offensive posture. 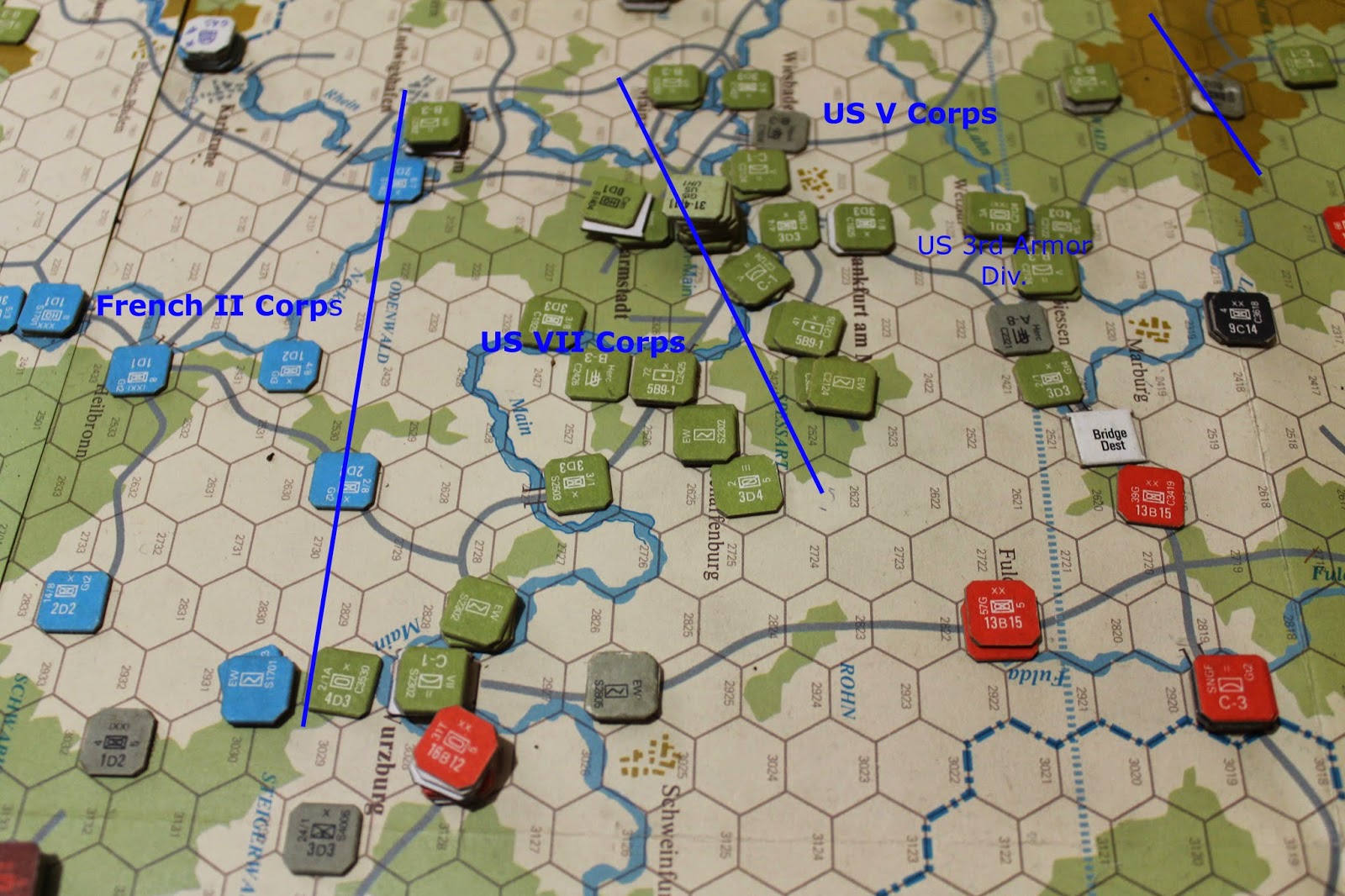 Despite the fall of Munich and Nuremberg, overall situation in South Germany is not too good for Warsaw Pact. With the arrival of French II corps, Czechoslovakian and Hungarian armies will have a hard time trying to break NATO front line. 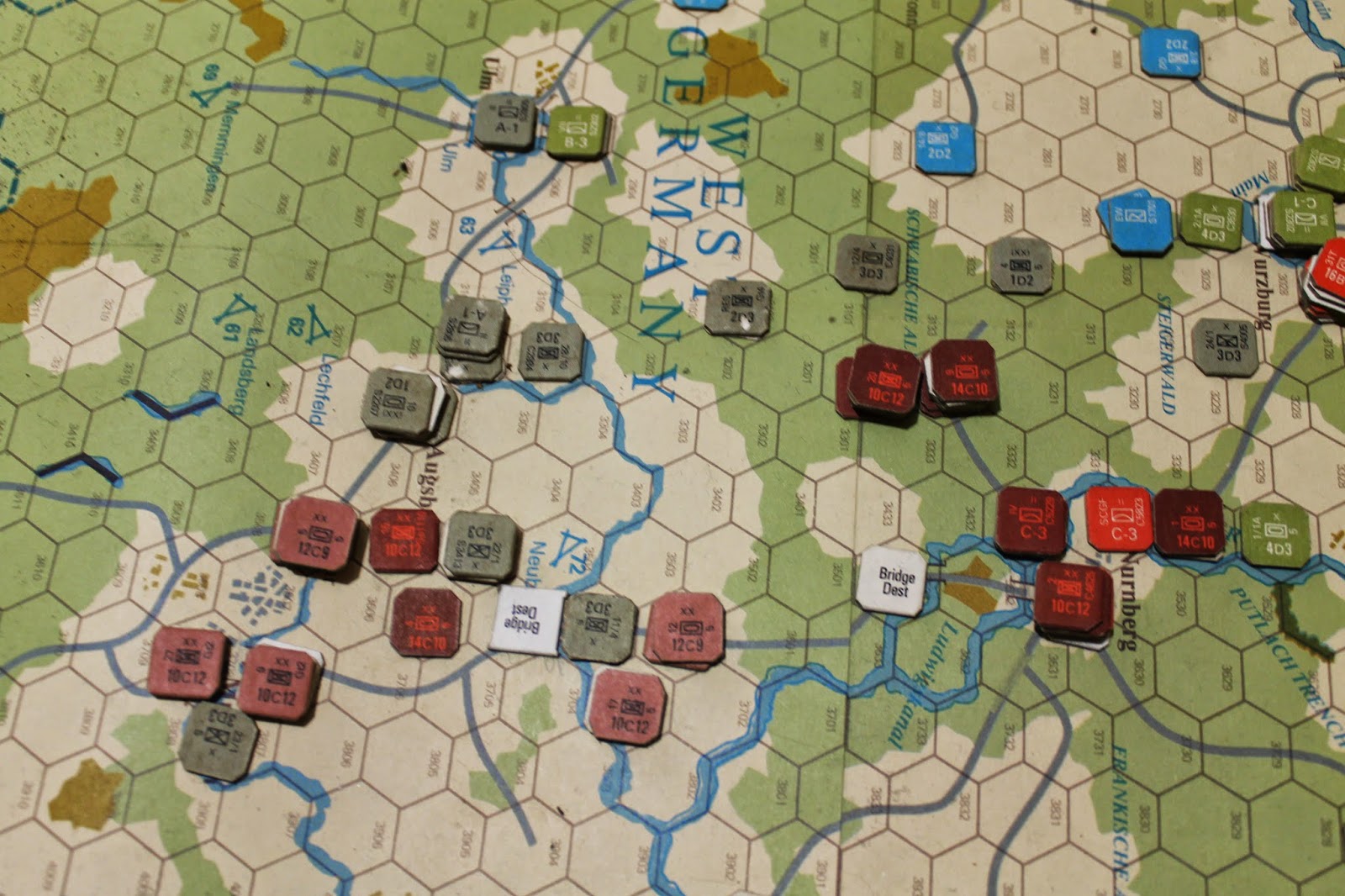 Starting with D+5, NATO air strategy moved to the offensive.
Wild Weasel raids in Czechoslovakia opened up three flak-free zone, used by the tactical fighter-bombers for attacking Bratislava and Zatec airports. Both airports were heavily damaged, along with several SAM sites defending the area. 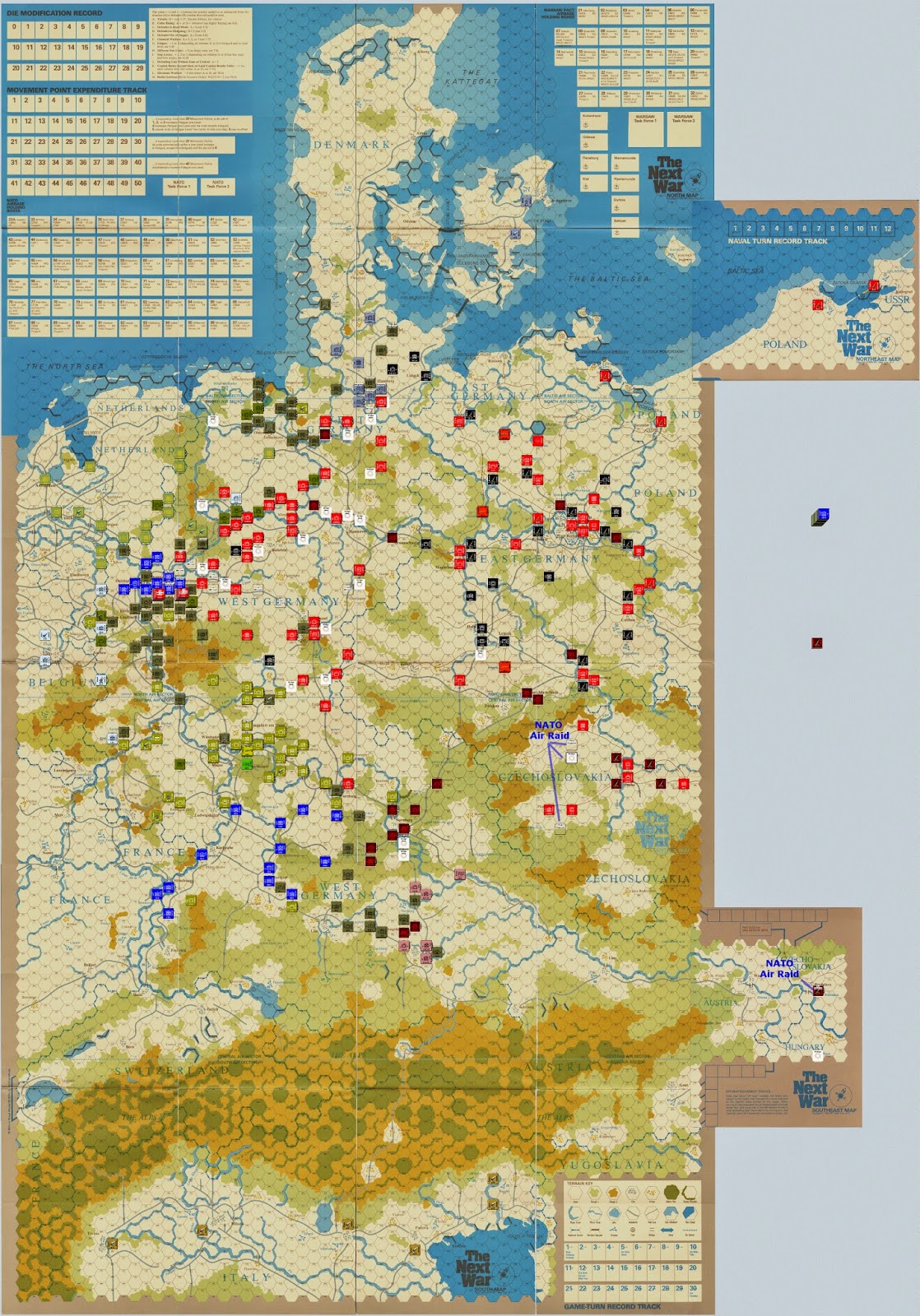