The Dogs of War - On Map and More 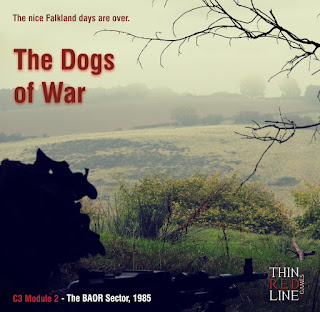 As you maybe know, The Dogs of War will be the second module of our C3 series, covering the British Army Of the Rhine sector during the dramatic events of 1985's World War Three.
Focused on Command, Control and Communication problems and on John Boyd's OODA Cycle, the C3 Series takes a different approach on several wargame mechanisms and forces players to face three equally dangerous foes: the enemy, their own plan and time.

"The goal is to collapse adversary’s system into confusion and disorder causing him to over and under react to activity that appears simultaneously menacing as well as ambiguous, chaotic, or misleading."

Ok, enough introduction. The map is proceeding very well, as you may see in the images below. We're still missing several labels, bridges and airfields.

From a strict mobility point of view, BAOR Sector has a much better terrain than Fulda for conducting a  mechanized offensive: lots of plain, a great road network and only a few gentle hills.

From a combat point of view, it's probably worse than US V Corps Sector for the attacker: The Weser river is an obstacle that cannot be avoided, and the Britons can use several cities and dozens of small towns as strongpoints to slow down Warsaw Pact's advance.

Meanwhile, Anthony Morphet is preparing a first version of NATO Order of Battle using his on-field knowledge. British, Belgian and West German forces will be included, and I'm sure we'll have infinite discussions ranging from timings of artillery operations to the names of the Battalions :)