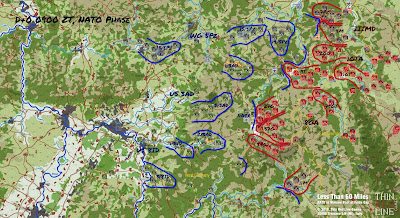 Some details on our internal playtest session 13 for Less Than 60 Miles. For a change, I'm US V Corps Commander in charge - Better Dead Than Red!

Playtest is made on Vassal, using the final production map and counters art you will find in the box. One of the main consequences of the previous playtest sessions has been the change of the time scale, now at three hours per turn.

In this AAR, I'll try to give some hints on several mechanisms of the "C3" system, keeping a fast narrative without excessive details.

More info on Less Than 60 Miles can be found on the official Thin Red Line Games site!

At 0600 Central European Time of July, 24 1985 Warsaw Pact forces cross the Inner German Border. Western intelligence and politician screwed up, and the order to move to battle positions is issued only 10 hours before the beginning of the attack.

Forces available to US V Corps are:

The main goal of this playtest session is to verify NATO's capabilities to counterattack effectively at Brigade level, if offered a decent chance. Consequently, Warsaw Pact battle plan is voluntarily quite different from a masterpiece of military art.

1st GTA and 8th GA will advance along the main roads toward Frankfurt, leaving a convenient gap between them that could be used by NATO for a flank counterattack. East German Division will put pressure on NATO flanks and support the Soviet advance if needed.

As in any typical Soviet-era plan, everything goes as smooth as silk and the Glorious Armies of the Socialist People will control Frankfurt at D+3 (H+72) 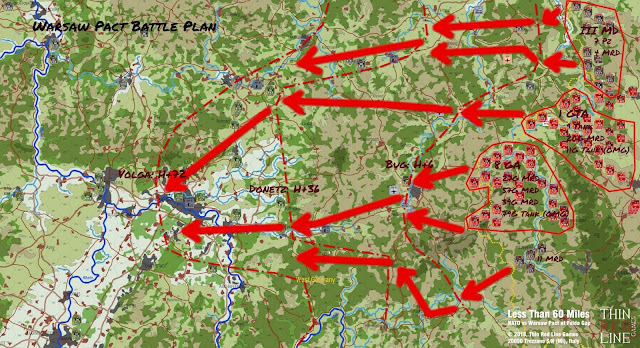 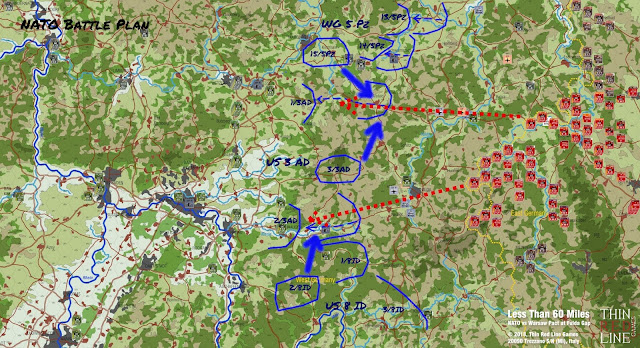 Warsaw Pact obtains some HUMINT on the exact location of West German's Attack Helicopter squadrons, and proceed to attack them with a combined air + SS-23 strike. WG 1/5 AH squadron is completely destroyed during the attack. 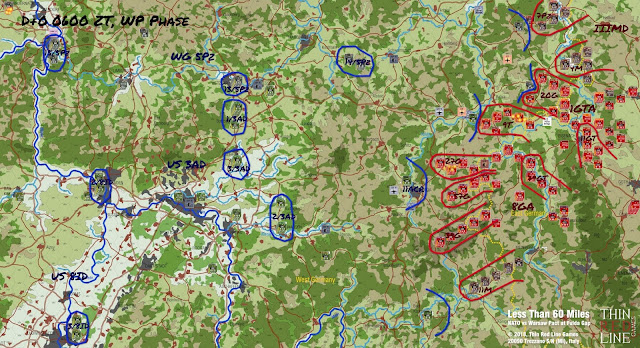 Biggest problem for NATO is the lack of time for getting US 3AD and WG 5Pz Divisions into position.

The only option is moving in Road Mode toward the FEBA, hoping that enemy air strikes will not obliterate the vulnerable columns in the process. Moreover, troops could be exposed to enemy ground attacks during final passage into Tactical / Defense Posture as covering forces could be heavily engaged and unable to protect the deployment areas.

For now, covering forces North of Fulda succeed in disengaging from the enemy and move to the next battle position. 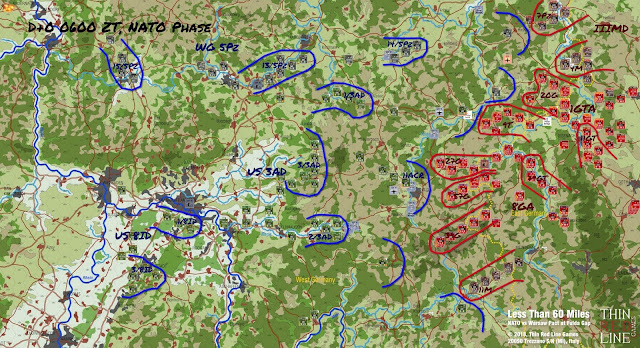 A couple of Ground Strike Missions target WP Artillery battalions right behind the leading regiments, as their forward position and Close Support Posture give NATO good intelligence on their location. After incurring in some serious losses, Warsaw Pact Front Commander orders all the RAG battalions to stay at least 5 km behind the FEBA. 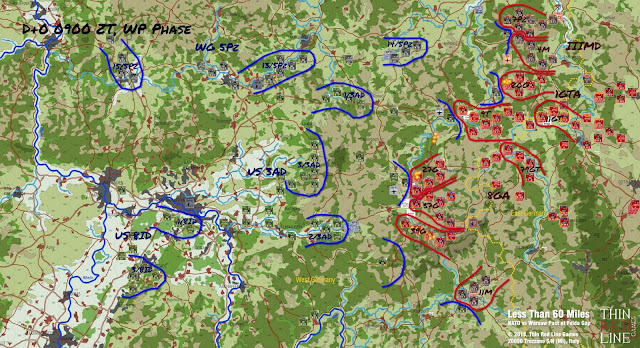 Warsaw Pact interdicts roads used by 1/3AD and 3/3AD, slowing down their movement to the FEBA. 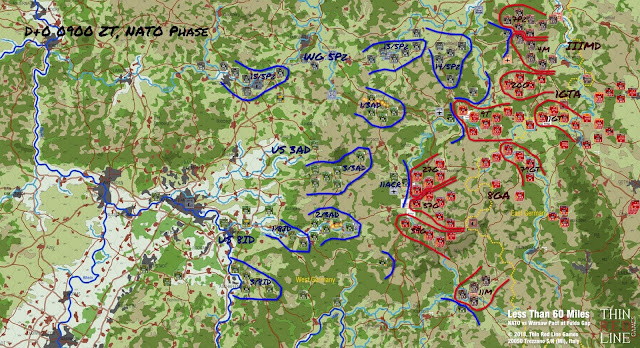 Attacks against NATO covering forces along the whole front are successful, forcing them to disengage or retreat West. 1/11ACR is practically encircled in the western outskirts of Fulda. 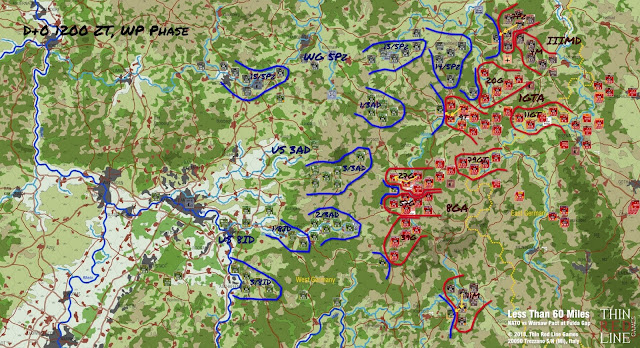 NATO Brigades are now more or less in position, but helpless as most Battalions are still in Road Posture. Covering forces must hold in place and keep enemy away for six more hours, or the main defense line could be unable to withstand the initial impact. 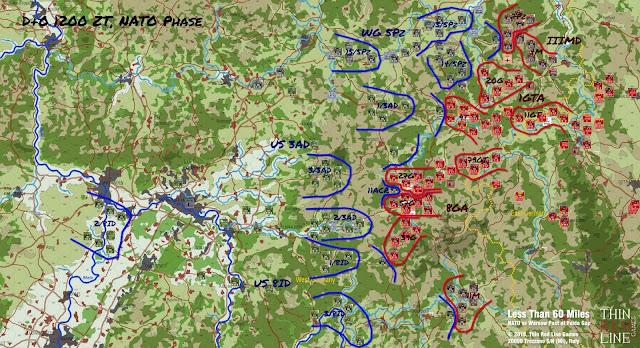 In the end, most of covering troops must retreat with heavy losses, and in a couple of areas Pact's Divisions are able to make contact with NATO main defense forces. Luckily, Soviet 27th Guards MRD paid the price for destroying 1/11 ACR and is now somewhat fatigued. 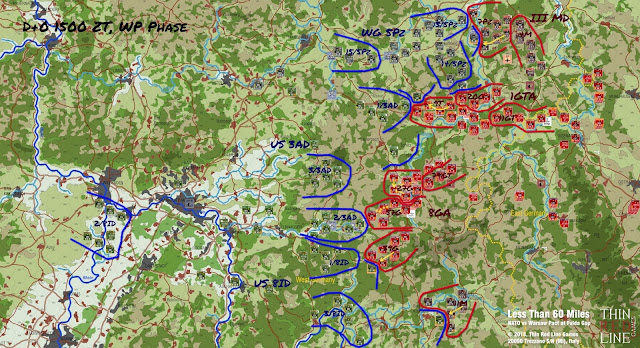 Orders are frantically issued and executed by NATO brigades, but despite the urgency several US 8ID units will not be ready for combat before H2100. US 3AD and WG 5Pz are able to assume a mix of Defense and Tactical Postures, not optimal but maybe enough for stopping the first assaults.

The main problem is the absence of most attack helicopter squadrons, still busy setting up FARPs away from airfields with firing coordinates well known to Warsaw Pact. This delay is partially imputable to wrong orders issued to AH units during the first, chaotic hours of the conflict. 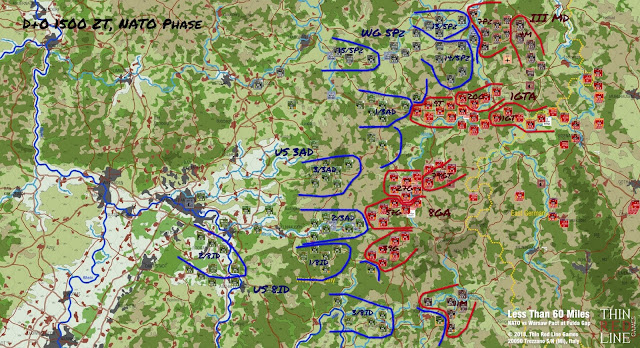 Remaining NATO covering forces are attacked repeatedly, with most of them finally succumbing to losses.

In particular, 9th Tank Division is able to drive a wedge between US 3AD and WG 5Pz Divisions, putting US 2-36 Battalion in a dangerous position. 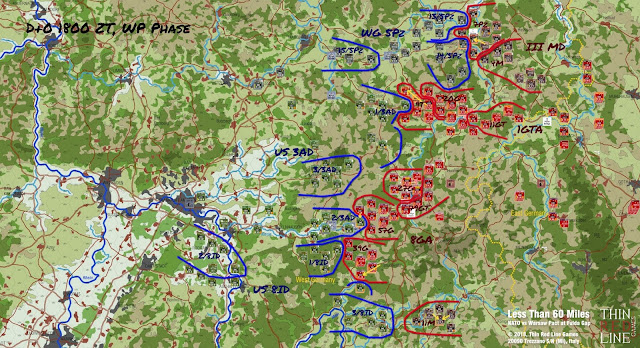 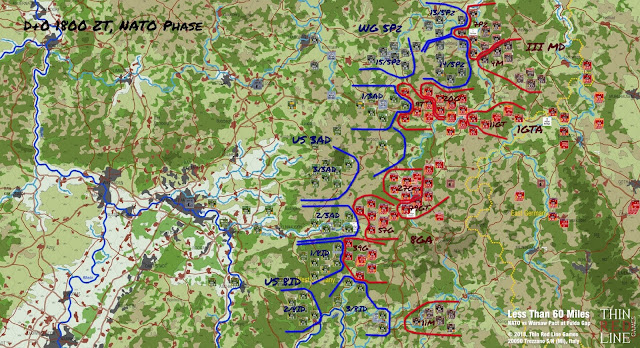 Successful Intelligence allows Warsaw Pact to pinpoint WG 14/5Pz HQ exact location, and in a matter of minutes a heavy bombardment by SS-21 and SS-23 missiles almost destroys it. This could have a heavy impact on WG brigade's combat capabilities in the next few hours, but luckily night is approaching. 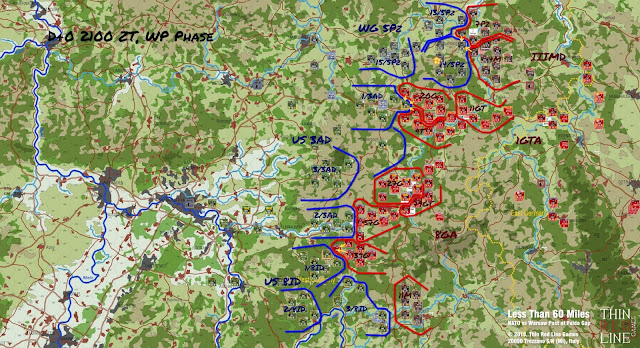 NATO is forced to move 3/3AD brigade near the FEBA, risking to have it engaged by Pact's forces. Hopefully, Soviet 8th Guards Army will continue to move along the East - West autobahn, ignoring it. 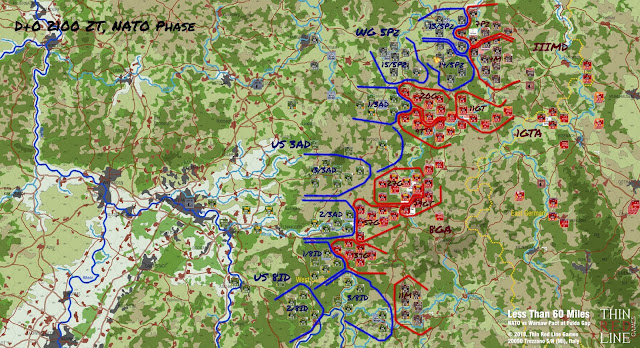 Now, two night game turns are approaching. We will see if Warsaw Pact Commander wants to press on, conceding no rest to NATO and his own troops. Part two of this AAR will follow!
a 12:02:00 4 comments: