The NATO OOB for the next C3 Module Die Festung Hamburg is almost complete. The area covered is the Northern Sector of NORTHAG, defended by a true multinational force including Denmark, The Netherlands, West Germany, United Kingdom and United States.

Here's some notes on the various nationalities, each one with sample units.

The main Danish contribution to the defense of the Schleswig-Holstein sector is the Jutland Division. Unfortunately, as written by David Isby in Armies of NATO's Central Front, "Jutland Division certainly lies at the lower end of the spectrum among NATO's mechanized divisions."

The wartime tactical organization was the well-known Combined Arms battalions equipped with Leopard 1A3, M113 and some (few) anti-tank and combat support equipment.

The division was manned only at 20% during peacetime, and shared the same problems plaguing the rest of the Danish Army: low funding, insufficient training and low ammunition stockpiles. Moreover, the time needed to mobilise the missing 80% personnel could have been significantly long. 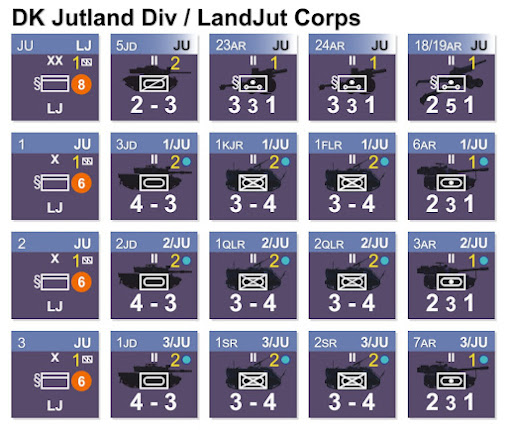 The Bundeswehr has the Northern slice of WG I Corps, the combined WG/NL I Corps and the LANDJUT Corps represented. The total forces were approximately two PanzerGrenadier and one Panzer divisions, reinforced by some Heimatschutzbrigade and Heimatschutzregiment from the territorial army.

An additional Panzer division - the NORTHAG strategic reserve - was also available, but of course committing it would have been a quite drastic decision.

Dutch Army added a whole Corps to NORTHAG defense...In theory. In reality, only a single brigade plus some combat support were near the FEBA, with everything else stationed in the Netherlands 300 km to the west. Moreover, the very complicated Dutch mobilisation system needed time to bring the manoeuvre units to operational status.

On the positive side, the Dutch units were among the heaviest in the NATO arsenal, with up to 20 MBTs, 40 APCs and 12 combat support AFVs for each mechanized battalion.

The tactical organisation and combat values of the Dutch units gave life to one of the most heated discussions in the development team thus far. A detailed explanation of the different points of view will be probably available in the Designers' Notes :) 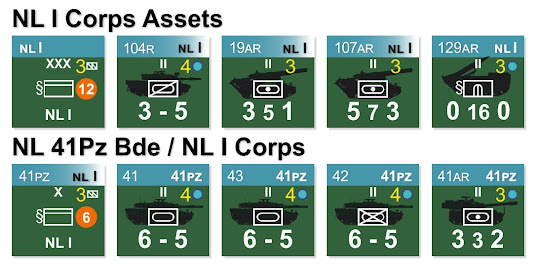 In a war against Warsaw Pact, the UK Mobile Force Brigade would have moved by sealift to one of the following areas of deployment:

UK Mobile Force is also Tony Morphet's Secret Love, as he was heavily involved with this formation during his years of active service :)

In the end, it will be up to NATO Commander to decide where to commit the brigade, with each choice having its pros and cons.

In 1985, the 3rd Brigade of 2nd Armoured Division was stationed near Bremen, acting as the forward element of US III Corps.

The brigade would have probably remained under strict US control and was missing most of its support assets (Trucks, fuel tankers, maintenance, medical services). Consequently, the combat value for its battalions is lower than other similar US units.

EDIT 20220827: After considerable additional research and help from several veterans who served in the brigade, we determined our first evaluation was vastly wrong! 2AD (Fwd) could actually act as NL I Corps covering force in case of need, and also had additional logistic support allowing independent operations for a limited time. The latest OOB version reflects these changes.

Want to defend the free world from the Russian hordes?
Want to free the German Workers enslaved by the American plutocrats?

Enlist by writing to info@TRLGames.com! Your Country, Bloc, Motherland, whatever needs YOU! See the link below to know how you can help:

Here's the latest map draft for the upcoming Die Festung Hamburg, covering the 1985 Warsaw Pact offensive in the North German Plain sector. Some details are still missing (airfields, bridges, map labels, etc) but we're getting near. 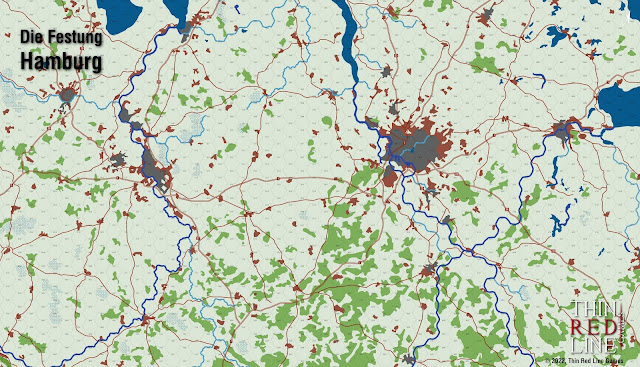 The absence of significant elevations and the vast road network should help Warsaw Pact's mechanized offensive, but things are made harder by the extended urban areas and by several formidable water obstacles.

On this latter point, I think some additional details could be interesting:

Want to defend the free world from the Russian hordes?
Want to help the German Workers enslaved by the American plutocrats?
Enlist by writing to info@TRLGames.com! Your Country, Bloc, Motherland, whatever needs YOU!
a 13:11:00 6 comments: