The Dogs of War - Some BAOR counters

Order of Battle for The Dogs of War is almost completed....we're still working on some battalions' values and on the exact composition of Bundeswehr's divisional artillery, but most of work is done.

As an eye candy, here's BAOR 1st Armoured Division, in all its royal majesty!

The Dogs Of War - Strategic Overview 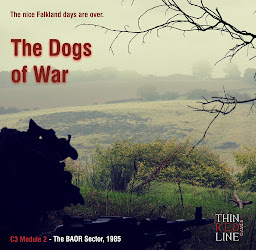 Development of The Dogs of War continues.....today, three hours on Skype with Anthony Morphet and Ulf Krahn.

As usual in the first phases, most of the discussion covered the details about NATO response time to a possible Warsaw Pact attack. My personal opinion on NATO's capabilities to react quickly are quite pessimistic, particularly for some countries, while Anthony and Ulf have a more "neutral" point of view.

The global scenario postulates that NATO political branch (i.e., the single governments of NATO countries) recognizes that war is unavoidable 48 hours before Warsaw Pact forces cross the Inner German Border, thus giving the following general schedule:
On the Warsaw Pact side, the following reorganization will take place before starting the hostilities:
The scenario considers the Hannover - Kassel sector as the Warsaw Pact's main thrust, so the area covered by The Dogs of War will be critical for deciding the war. Without too many details, here's a summary of Warsaw Pact plan for Northern and Central Fronts.
Other important changes from Less Than 60 Miles should be: