The Next War - Operation Attila - D+1

Despite showing publicly a granitic determination, some of the Warsaw Pact countries remains deeply worried about the now imminent attack on the Western Proletariat oppressors, code named "Operation Attila".

At the final peacetime meeting of Warsaw Pact's Political Consultative Comitee, only a few hours before the scheduled attack, the Minister of National Defence of the People's Republic of Poland Wojciech Jaruzelsky expresses his concerns about the "dramatic consequences of a war on the People and Communist Party of Poland". He assures full logistical support to the offensive, but announces that "the People's Republic of Poland will be unable to commit its land forces, as they are needed to keep the internal situation under control". On the other hand, the Polish Air Force will be at Pact disposal.

Bad news do not end here for Kremlin; in Czechoslovakia, demonstrations against the "incoming bloodbath" grow bigger every hour, forcing the Soviets to maintain a 3 divisions garrison in the country to avoid the outbreak of a full-scale popular revolt.

War plans are quickly modified to take into account the absence of the Polish Slesia and Pomerania Armies and the weakened Southern Front.

Then, at 0300 of May 3, 1980 Warsaw Pact air units invade NATO airspace. 45 minutes later, more than 30,000 armoured vehicles start crossing the West German border. As in NATO's worst nightmares, chemical weapons are used from the start in support of Warsaw Pact's attack.

In the North Sector, NATO forfeits any resistance in order to focus on keeping the air transport routes open for the REFORGER troops. Hundreds of Soviet fighter-bombers break loose to support the Pact advance.

In the Central Sector, F-15 and F-4 Combat Air Patrols struggle for hours against apparently endless waves of enemy fighters, inflicting very heavy losses. At the end, they are forced to give up a dearly gained air superiority to the Warsaw Pact.

In the South Sector, the Italian air force succeeds in keeping the sky clear, supported by some additional France airplanes.

In the North, 2nd Guards Tank Army encounters an unexpected stiff resistance by the Dutch brigade defending Lubeck and the city falls after 20 hours of heavy fighting. The remaining 2 divisions of the Army enter Hamburg's Southern outskirts, but their advance toward the city center is blocked by a German brigade.
Due to the retreat of the Polish Armies, the 20th Guards Army is forced to stretch its area of operation to the North, thus failing to encircle Hannover by North, its main objective for D+1.

The Berlin Army attacks with heavy air and helicopter support the NATO prepared positions in West Berlin, occupying the city and forcing the surviving defenders to surrender.

The 3rd Shock Army overruns the defenses South of Hannover, encircling and destroying several British units in the process.

The 1st Guards Tank Army, after cleaning up the area around Kassel, starts its run for the Ruhr.
The 8th Guards Army attacks the Black Horse Regiment position at Fulda, disloging it without excessive problems.

In the South, the 1st Czech Army, reinforced by a Soviet division, moves in front of Nuremberg.
The Hungarian Army, after having a difficult time at finding an intact bridge over the Danube, cross it at Regensburg and attacks the 1st German Mountain Division, forcing it to retreat just North of Munich.


Here's a more detailed situation made with Vassal; not every unit is on the map due to fog of war (NATO player knows of this blog!). 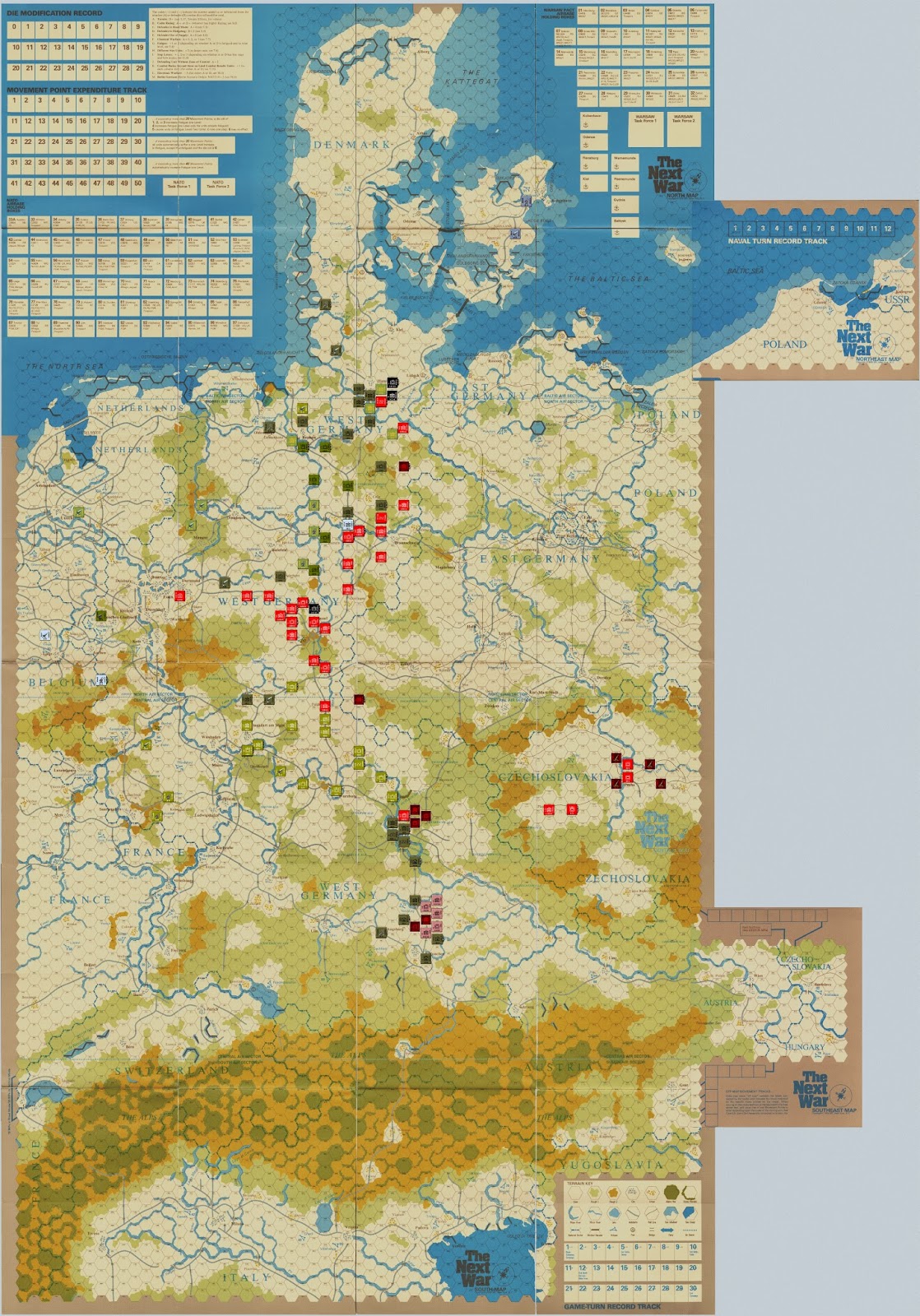 Even inside NATO the political and psychological impact of a full scale war in Europe is heavy.

In the 24 hours preceding hostility outbreak, more than 2,000 Dutch soldiers of NORTHAG I German / Dutch Corps simply disappear, sometimes with the help of their company and battalion officers.
Faced with a 20% desertion rate and the concrete possibility of a complete evaporation of the army, the Dutch government is forced to announce the redeployment of all ground troops to Netherlands, with only the Air Force remaining at NATO's disposal.

While the Dutch units try to quickly disengage from combat, the German forces around Hamburg decide to entrench inside the city and prepare for a new Stalingrad.

Belgian 16th Division takes charge of holding Hannover, while German 3rd Division acts as a covering force to give enough time to consolidate a defense line on the Weser.

In the Ruhr area, NATO reaction to the 103rd Guards Airborne landing is ferocious: almost every AH-1 Cobra not contaminated by persistent gas and able to fly is sent to conduct air-to-ground attacks against the Soviet division. The defender's flak has almost no effect on the American helicopters, and after 6 hours of relentless attacks the division suffers a stunning 50% losses in manpower and 90% losses in vehicles.

At the same time, German 7th Division moves to cover the northern flank on the 1st Guards Army advance axis, while the entire British 4th Armored Division is placed to defend the Ruhr outskirts at Hagen, supported by BAOR I Corps artillery.
To support defense, French attack helicopters use Nap-of-Earth approach to run multiple interdiction missions on the Kassel - Ruhr autobahn, cluttering it with craters and wrecked trucks (not shown on satellite image)

In South Germany, 1st Alpine Division around Munich unsuccessfully attempt to disengage from Pact divisions, while the 4th Division prepares to defend Nuremberg and the French II Corps rushes East to plug the holes in SouthAG defense line.

In an attempt to disrupt the Warsaw Pact support and supply lines, a French Brigade of the 11th Paratroops Divisions is transported by helicopters South of Halle. Unfortunately for NATO, the recognition failed to identify a East German tank regiment defending the airport; the French attack is stopped with the help of several air ground support missions, but the bridge on the Saal is destroyed by the French. 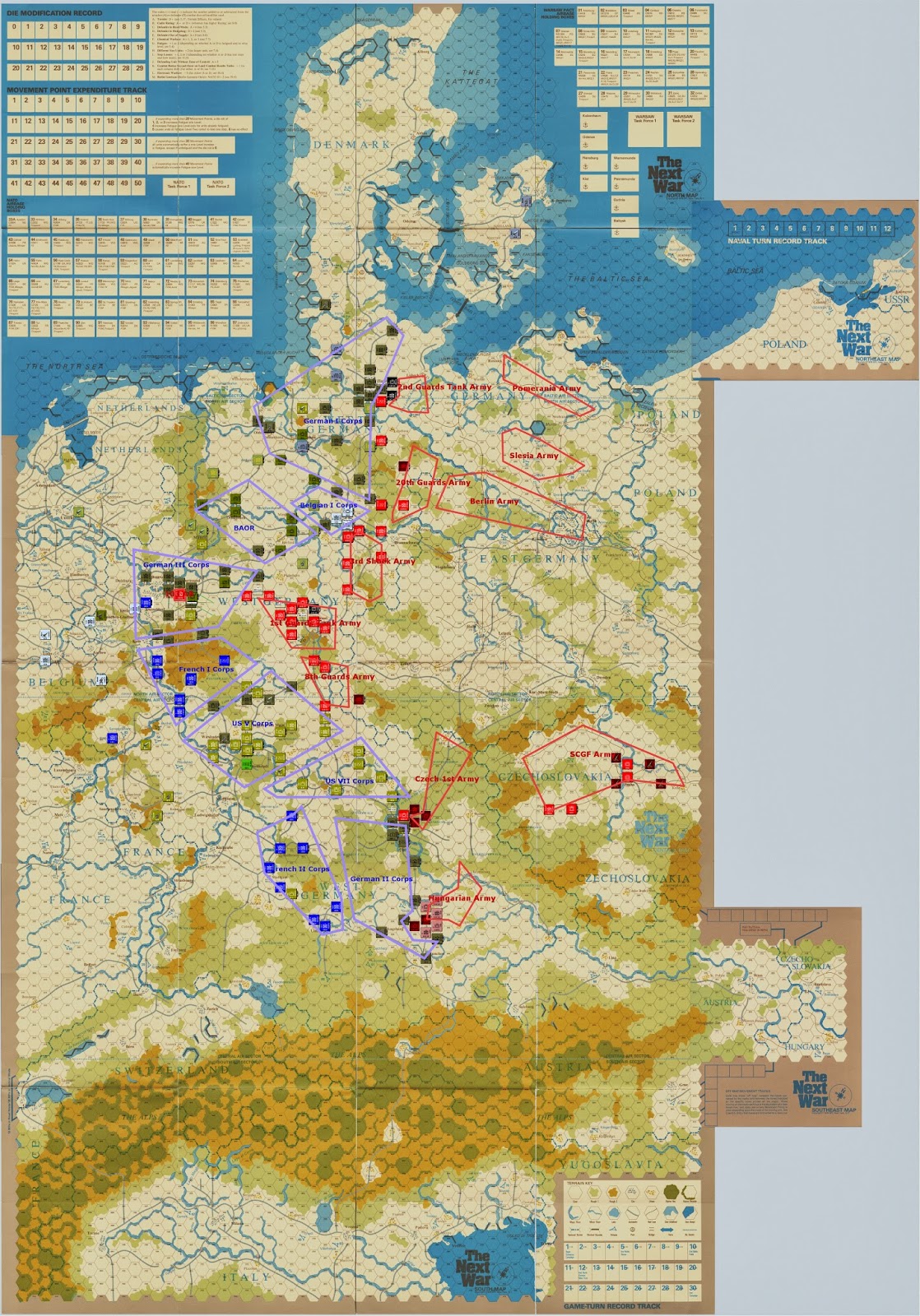 The Next War - Operation Attila - D+0

Following Soviet invasion of Afghanistan in October, 1979, the relationships between the Western and the Communist blocks begins to deteriorate quickly.

As both sides frantically try to cool down the crisis using diplomatic channels, at April 26, 1980 North Korea brings the tension to new levels by attacking southward.

With more and more diplomatic options closing every hour, the contingency plans for an all-out European conflict are put into effect and both sides start mobilisation and troop movements.

At May 2, 1980, after 4 days of sabre-rattling, Warsaw Pact is ready to cross the border and put an end to the Cold War. 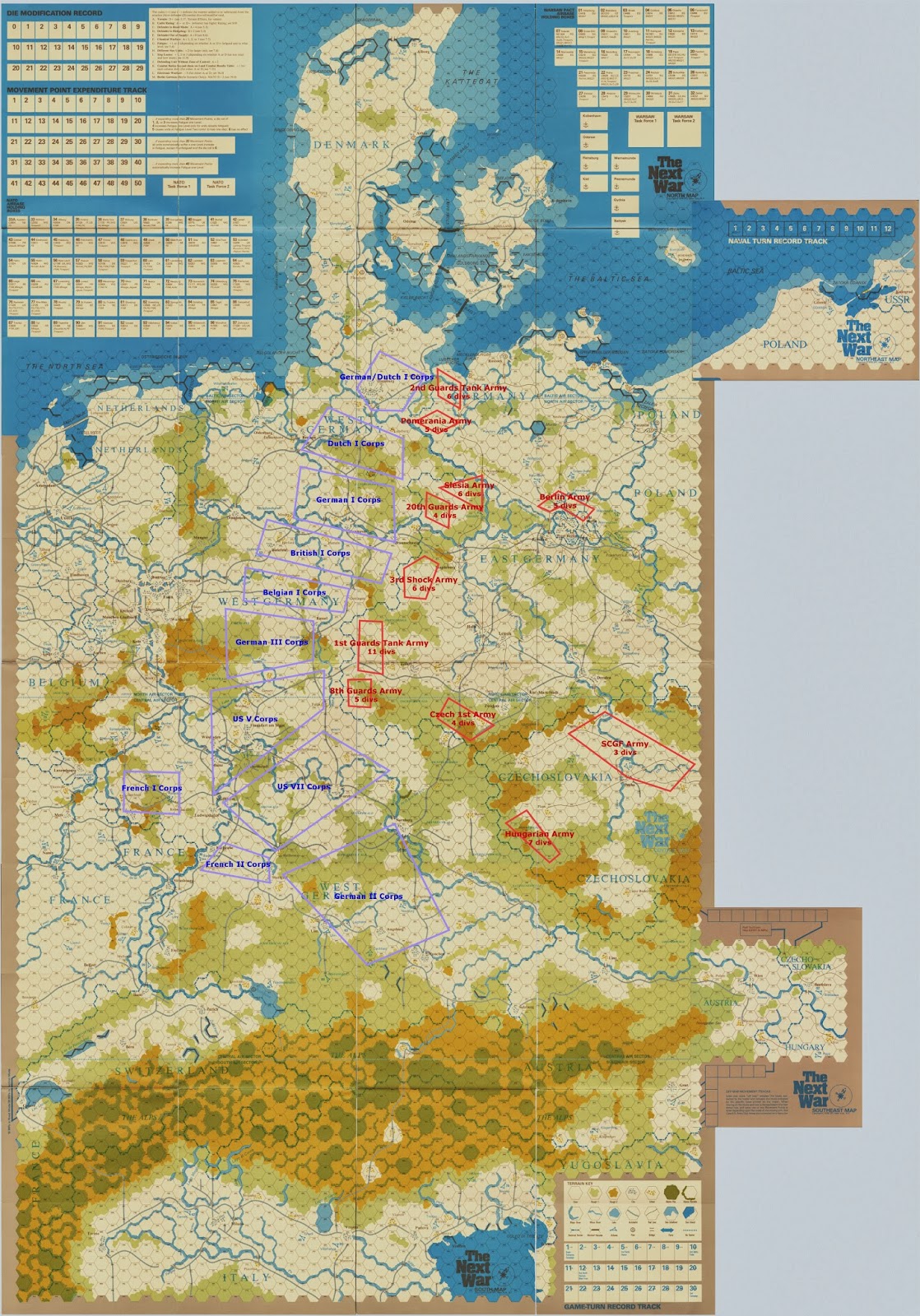 The Next War - Operation Attila - Startup

We have been playing "The Next War" by SPI for more than 30 years, and we're now starting a new game!
Here's some specs:

Everything except Naval Game

With the original supply rules, WP and NATO units are fully supplied in the initial 3-4 turns, no matter what; this doesn't make any sense as a 1st line WP division doesn't take with us 6 days of supply (ammo, fuel, food, everything) while moving at full speed thru west germany.
Our house rule states that, even in the first 3 (WP) or 4 (NATO) turns, a division must trace a standard supply path to an HQ in order to be in full supply status. The HQ itself doesn't need to trace a supply path of any sort.

SSM delivered chemicals are removed at the end of the ensuing air war phase. This way their effect extends even on airplanes in an airport, rendering them useless.
The SSM chemicals effect decreases over time in the following manner:

In a ground combat, all flak stacked with the attacking unit is considered to be at range 0 against defender helicopters used in combat air support.
This rule deny invulnerability to helicopters moving in ground defense support using NOE flying

No +2 dice roll modifier for combat between different size units.
In our opinion, the difference in size is already simulated by the different combat values