The Next War, Operation Attila - Inside the War, NATO Gazette No. 2

For the second time, a SHAPE report about the latest events has been made publicly available.

Admiral Gunter Luther quickly scanned the latest BDA reports about the air strikes against 2nd GTA.
"Not good. Not good at all." he whispered.

He took the reports and entered the office of SHAPE Commander, already knowing what was going to happen. "Sir, we have the first reports about Operation Angry Boar."

General Rogers was sitting at his desk, studying several maps with Brigadier Clay, his Chief of Staff;
he looked at the Admiral: "OK, let's see what 2nd ATAF can really do. Gunter, give us the short version."

The German Admiral opened the report and started:"According to 2nd ATAF, today between 04:00 and 12:00 CET more than 400 fixed-wing and 275 rotary-wing aircrafts engaged 7th DDR Armored and 66th Soviet Motorized Divisions, 50 km SouthEast of Wuppertal."
"Before 05:00, enemy air defenses were effectively suppressed  by a combination of Wild Weasel and traditional SEAD missions, with little losses. At 05:00 the attack waves began to strike the target area. According to the pilots' reports and the subsequent Bomb Damage Assessment, the total losses inflicted are 214 tanks, 184 APCs, 120 trucks, 22 large caliber motorized artillery. The personnel losses are estimated at 1200 units or more." 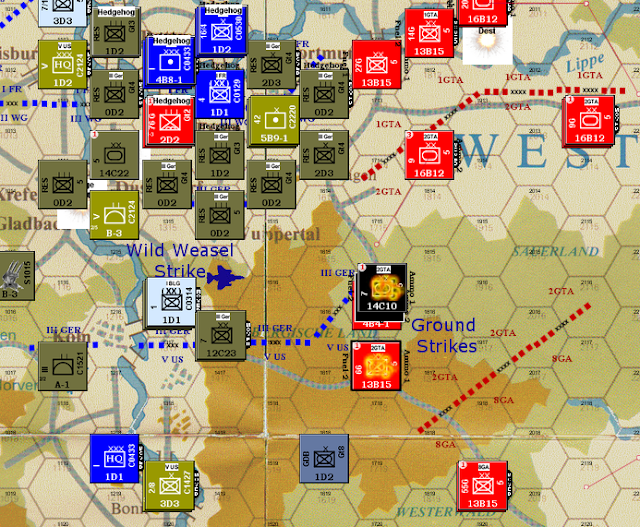 The SHAPE Commander listened his Deputy Officer in silence, livid. Then, he exploded.
"FUCK!! WHAT THE FUCK!! They promised me to ANNIHILATE those divisions! 700 aircrafts and all we get is the equivalent of TWO REGIMENTS of dick suckers destroyed?!"

Rogers threw his coffee mug against the wall, then turned to the window while trying to regain his self-control. "What the FUCK went wrong? Are they using FUCKING FIRECRACKERS instead of iron bombs?"

Admiral Luther answered "According to 2nd ATAF report, low-altitude cloud cover in the target area heavily hampered operations. Most of the kills were scored by French Gazelles attacking in a good weather window. We should call our French friends and thank them for the good work."

"OK. What about our losses?"

Brigadier Clay sighed: "At least we'll be able to use them again in 24 hours. Until then, we'll have to rely on the boots on the ground."

Luther opened another report: "Sir, better news from V Corps. As planned, US 1st Brigade, 2nd Armored Division supported by V Corps Artillery attacked 4th DDR Motorized Division. Despite being severely outnumbered, they were able to push the Commies back enough to reopen the supply line of US 1st Mechanized Division." 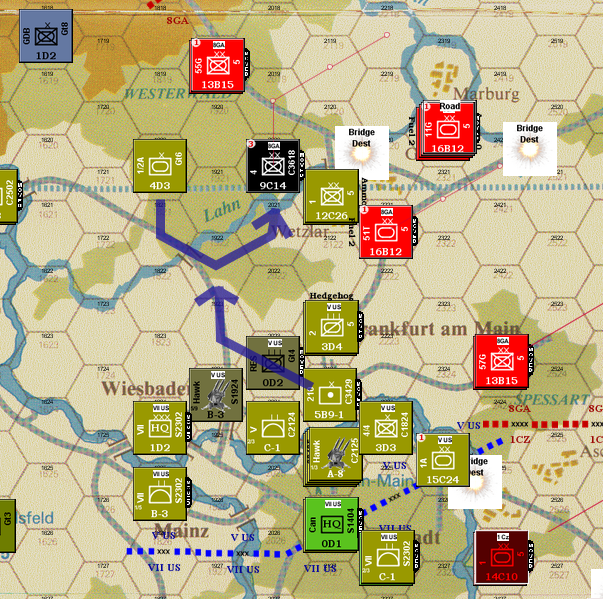 The Next War, Operation Attila - Inside the War, NATO Gazette No. 1

Turn 10 NATO Land Phase is underway, and NATO finally breaks the silence kept since the start of the war!
The following transcripts were made public by SHAPE today.

We are proud to confirm that today at 03:00 CET, a successful attack from British Special Forces completely destroyed Soviet 13th Army HQ, located 40 km South of Fulda, along with its mobile "Gainful" SAM support unit.

No losses were reported by British HQ, apart from 2 lightly wounded SAS soldiers.

SHAPE Commander Bernard Rogers received his liaison officer with the British  HQ, a few minutes after 6:00 AM.

After congratulating for the brilliant success of operation “Slick”, the attention of the Supreme Commander shifted to some “special” military books publicly available in Europe and USA.
In two of the books, after a WP attack almost reached the river Rhine, NATO planned and requested permission to use Tactical A-Bomb delivered by Pershing missiles and airplanes.

"What a FUGAZI choice!" Rogers yelled, throwing the book at the door.

The heavy tome almost hit Admiral Gunter Luther, his Deputy Commander at SHAPE, who was opening the door at the wrong time. Luther dodged the book, then looked at his superior: "You are in your best mood, I see.".

Rogers started walking nervously in the room. "Who can be so STUPID to think that we could get the permission from our President or Prime Minister to launch a nuclear attack in Germany? East or even worse WEST Germany?"
"We are a democracy and we are the Good Boys. We don’t use chemical or nuke. NO use of nuclear/Chem weapons. Period."

Luther stepped slowly into the room, then looked at Rogers. "True Sir, but as you know our intelligence identified more than ten artillery regiments in a 50 km range from the Ruhr, and at least twenty Warsaw Pact first-line Divisions."
"They could attack anywhere on a 200 km front, from Netherlands to Bonn. We could not be able to stop them. A preemptive grant for use of tactical nuclear weapons could give us more options and act as a deterrent too."

Rogers stared at his Deputy Officer."No way. We will use what we have. No atomic mushrooms."
"Operation Rockpile has almost completed the planning phase, and soon those fucking Commies will have some additional headaches."

"Very good" Admiral Luther said to close the argument.
"Sir, at 03:00 CET we received a report from Copehnaghen. Another assault from Soviet 106th Guards Airborne Division was stopped with heavy losses for them. Not only, the Soviets were supported by more or less 250 attack aircraft but that wasn't enough to force the Danish Brigade to retreat. They also confirmed 50 WP airplanes shot down!"

Rogers was not able to hide a smile "Haaa!!! Good !!! The guys with the axes! These newspapers can be real humorists sometime!"

Luther paused for a second before continuing. "Sir, the axes were really used in hand to hand combat. We also have some quite....compromising....photographs. They have been isolated, alone for 8 days.…Anyway, we were able to use a joint Danish-Dutch air group of 85 planes to support them, and they resulted quite decisive. We only had 13 planes damaged, but they should be up and running again soon."

Rogers acknowledged. "Ok, let be sure we'll keep that airport then."

"One last thing Sir, at 05:30 CET we received a report from 4th ATAF telling that Operation Zippo is concluded. The last AH-1 attack wave against the Soviet airborne troops inside the Ruhr was particularly effective, and the surviving Commies surrendered to German reserve troops this morning at 05:00 CET" 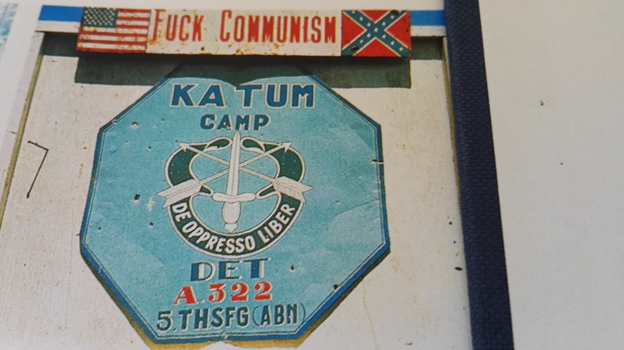 "Some good news at last." Rogers looked at the situation map for a couple of minutes before continuing.

"You know Luther, we are now entering the third week of war, and the situation is still confused."
"If it were a war game Moscow could probably claim a marginal victory now. But in the real world the Rhine River has not been crossed, Ruhr and Frankfurt are ours and 90 % of our Air Force is still operational."

"The Reds are going to try something special, maybe something like the chemical attacks on BAOR at the beginning of the war. We will see.""