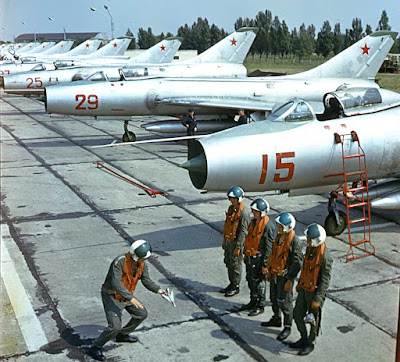 "Are you JOKING, Comrade? What's that piece of garbage under my wing?"
Air Major Koloda Stroganov was out of his grace; he simply could not believe what he was seeing mounted on the pilons of every MIG-21 of his squadron.

The ground crew technician sprang to attention before answering.
"It's a K-13 model A air to air missile, Comrade Major! It has been properly and thoroughly tested tonight and I can assure it's working perfectly, Comrade Major!"

Stroganov struggled for a few seconds against the impulse of hitting the soldier with his helmet. Then, he placed himself just a few inches from the technician's face.

"I don't FUCKING CARE if it's been tested! Do you have an idea of the time needed to lock on a target using that piece of shit? TWENTY seconds! Do you think I have TWENTY FUCKING SECONDS up there?"

"I want you to remove NOW that pathetic excuse for a missile and replace it with the usual, reliable, FAST K-13 model R, Object 320. IS THAT CLEAR ENOUGH?"

Stroganov's wingman approached, shaking his head. "Leave the boy alone, Koloda Andreyevich. Do you really think he came up with this idea on his own? Obviously some brass here decided that K-13 A is more than enough to shoot down fat, slow, overloaded NATO bombers. Too bad they sometime have pumped-up, fast, overarmed escort fighters with them."

Seeing a hope, the technician tried to justify himself. "That's how the Lieutenant said, Comrade Major! Yesterday evening we were ordered to spare the K-13 R missiles for MIG-23 wings only and to mount K-13 A on everything else! I'm sorry, Comrade Major!"

Major Stroganov sighed, trying to calm down. "I'm going to talk to the Colonel. Keep the boys in the cockpits, engines off until I come back."

The Next War, Operation Attila - D+12, Hamburg has fallen

A quick preview of the ongoing Warsaw Pact's land move at D+12.....
Here's the first page of May 15, 1980 morning edition of  "The Times", the infamous capitalist newspaper. 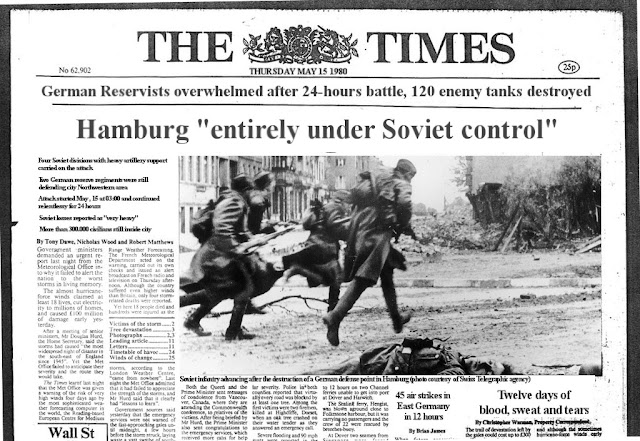 
The key to the entire war has become the air war and its effects on Warsaw Pact's supply.
The recent breakthrough in SOUTHAG defenses by 1st Czech Army probably forced a change of strategy at SHAEF, as the majority of the available planes were allocated to Central Sector.

NATO took a big risk by assigning practically every available airplane to ground support in North and Central sector, including the F-15 wings.

Despite the absence of any escort and the interception by 600+ enemy fighters, NATO fighter-bombers were able to penetrate the battlefield with a total loss of 50 planes (3-4 steps) destroyed and 75 damaged.

Despite that, the recent buildup of air defenses and reorganization of supply depots by Warsaw Pact brought some results. Only 4 out of 6 supply lines were interdicted, and only 3 out of 6 main supply depots were forced to redeploy backwards.

Therefore, a small but significant flow of ammunition and fuel will reach Warsaw Pact's front division in the next few hours, at least in Baltic and North air sectors.