At last, the pieces of Warsaw Pact's Northern offensive are falling into place....
Here's the official box art! More to come in the next few days. 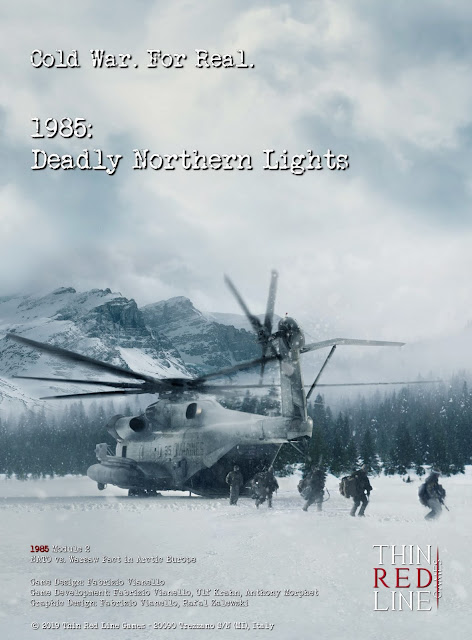 The Soviet offensive against Scandinavian Peninsula is getting ready.....This is a first, low-res draft of 1985: Deadly Northern Lights Map 1.

A lot of things are still missing, but our glorious cartographers are working without pause! The whole theater of operations will be covered by 5 maps (3 95x56cm, 2 smaller maps).

War is hell. In this case, a frozen one. 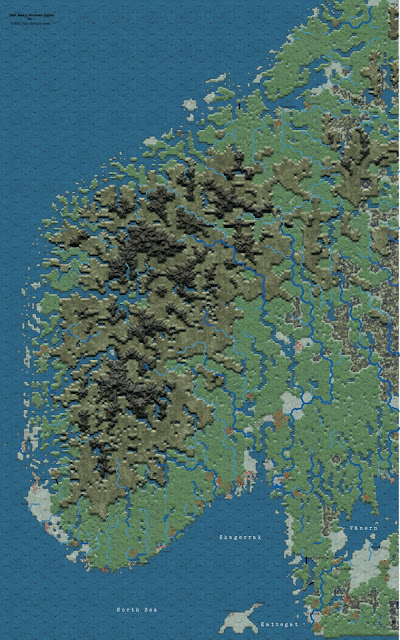 Here they are! A couple of complete countersheets, possible production version, in medium resolution. You'll find 6 of them in the box, with 5/8" counters.

More info on the Official Game Page. Also, you may reserve a copy by sending an email to info@TRLGames.com or by reporting for duty on this BoardGameGeek thread. 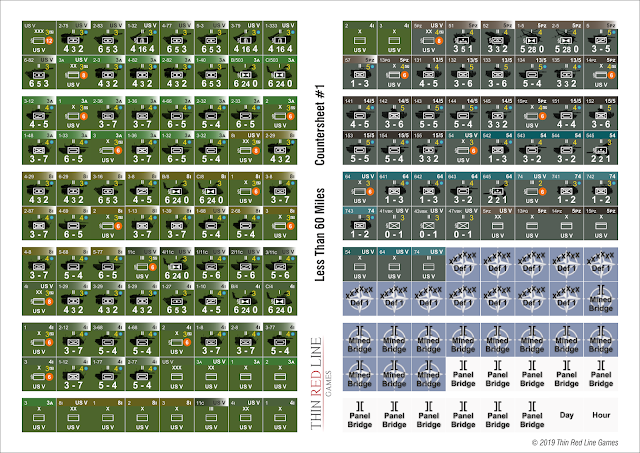 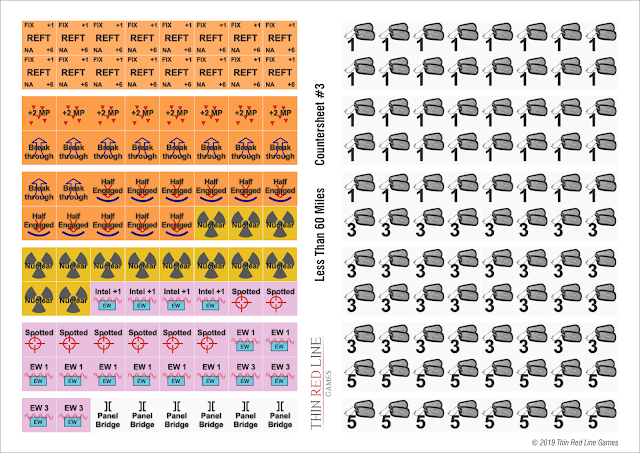 As the title says :)
Printed map will 98x55 cm, click on picture for maximum size. 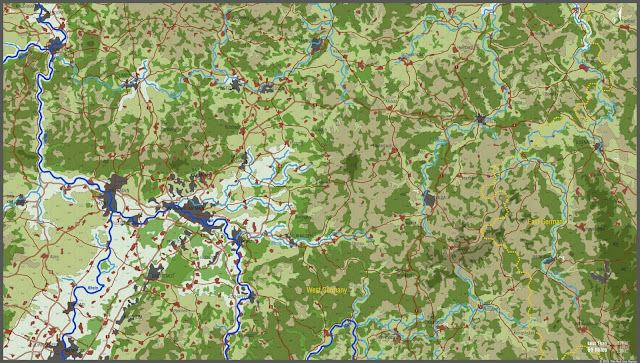 After Action Report for Less Than 60 Miles playtest session 15, playing "Steps of our Fathers" scenario. Once again, I'm in command of NATO forces.

As the old saying goes, “No plan survives the first contact with the enemy”. A few hours after the beginning of World War Three, it’s going to be clear that OPLAN 33001 – the operational directives for defending Frankfurt – will be no exception.

Orders for Soviet 1st Guards Tank Army are to attack resolutely toward Wetzlar and break the connections between US V Corps and WG III Corps, making any attempt to send reinforcements to NORTHAG problematic.

West German 5 PanzerDivision must quickly change its plans from a role of support to being the primary target of Warsaw Pact’s offensive in CENTAG area. US reinforcements are expected, but the Division will be alone in the first, critical hours.

For the second time in a Century, German soldiers are called to defend their homeland from the countless Soviet Hordes.

You may find more details on Less Than 60 Miles at the following links:

Only the Northern section of the map is used, down to Bad Hersfeld (Pictures are actually including a little more for sizing purpose).

Warsaw Pact will throw the full might of 1st Guards Tank Army against West German 5th Panzer Division. US 3/3AD Armored Brigade should arrive from South in 6 - 9 hours, but in the meantime 5th Panzer Division will have to face three Soviet and two East German Divisions, supported by two Missile Brigade, two Attack Helicopter Regiments and one Air Assault Brigade.

Victory locations for Warsaw Pact heavily suggest the main axis of advance for 1st GTA.
NATO gets VPs  by inflicting Attrition to WP Combat Units, so my plan is quite simple: inflict as much losses as possible, as stopping a full-strength Soviet Army is probably out of question.

WP also plays Action Card 04 - Rote Armee Fraktion: the attack is successful and a truck bomb destroys US V Corps HQ building, killing most of the top Commanding Officers. This will impose a considerable delay on NATO reaction time.

NATO must already handle several crisis. 14/5Pz Bde is tasked with forming a first defense line right behind the covering forces, while 13/5Pz Bde will retake at least one bridge from Soviet Paratroopers.

WG 13/5Pz Bde repeatedly attacks Soviet Airmobile Infantry Battalion defending Marburg. The Paratroopers try to hold ground against the first assaults. When they finally decide to disengage it's too late and their position is overran.The few survivors surrender to WG 134 Panzer Battalion.

1st Guards Tank Army first echelon Divisions keeps advancing, with West German covering forces doing their best to slow them down without being decisively engaged. NATO air interdiction and support is decisive to this end, but still desperately scarce.

WG 13/5 Panzer Bde continues hammering Soviet Paratroopers. The price in time and attrition is starting to worry me, but NATO needs those roads cleaned up to keep the supply lines opened.

Covering forces weren't able to blow up key bridges on Fulda river, so several vital NATO aircraft must be used to destroy them with air strikes. Warsaw Pact finally succeeds into engaging West German retreating forces, forcing them to execute a couple of difficult disengagements.

US V Corps HQ destruction during the first hours of war is slowing down all the operations, particularly the preparation of an advanced FARP for 5th Panzer Attack Helicopters Battalion. Without them, the Division does not have sufficient fire support.

More attacks against Soviet Paratroopers entrenched near Marburg, now nearing the breaking point...finally. Despite this, Soviet control of the bridges forces WG 15/5Pz Bde to take the Southern route along Autobahn 5 to get into position.

West German covering forces are in real trouble as combat attrition is reaching the limit.

Survivors of WG 154/15/5Pz Battalion are killed by a violent artillery bombardment, putting an end to their  vital covering action. Luckily, 14/5Pz Brigade is almost ready to take their place, even though there's no time to organize troops properly. I'll have to stay in Tactical Posture, as changing to Defense would require more troops screening the battalions during deployment.

WG 13/5Pz Brigade renews the assault against Paratroopers holding the bridge on Ohm river. One Soviet Battalion doesn't want to give up.

To the South, Soviet 11th Guards Tank Division change its advance axis to North-West, with Schwamlstadt as probable objective.

More NATO attacks against Soviet 35th Guards Airborne Assault Brigade. Damned Bolshevist fanatics. They have no more artillery ammo, half of their men are dead but they're still fighting.

The good news are that US 3rd Brigade, 3rd Armored Division finally arrived and took charge of the Alsfeld area defense. This should allow me to keep 13/5Pz Brigade as operational reserve, of course when it will finish the mop-up operations on river Ohm.

Warsaw Pact uses the first night hours for some rest / refit, particularly for artillery units which kept firing uninterruptedly for the last 18 hours.

The first air strike, against Soviet 11th Guards Tank Division HQ, is a success as the HQ is destroyed. This should slow down the whole enemy Division considerably. Second air strike targets Soviet 2/841 SP Artillery Battalion, inflicting some losses.

An air strike against Soviet 3/841G Rocket Artillery is successful, destroying the Battalion.

NATO retreats the whole front line 5 - 10 km to the West, hoping to gain enough time to better organize the defense.

Further disengagement of NATO forces. I need some time to recover, too many combat units are reaching the breaking point. Unfortunately, a couple of units failed to disengage or are forced to hold their position to cover the retreat.

NATO must commit 13/5Pz Brigade, its only reserve formation, as both WG 15/5Pz Bde and US 3/3AD Bde are reaching the breaking point.

NATO tries to districate its defense line, with mixed success. Anyway, I've not much space left to trade for time.

Let's Call It A Day

The worst error has been not giving the right priority to the preparation of FARP bases for West German Attack Helicopters, already delayed by the destruction of US V Corps HQ. Attack Helicopters were able to give support to 5th Panzer Division only starting from D+1, 0300 - definitely too late.

The second error is probably a consequence of the first: I overestimated the defense capabilities of West German brigades and tried to establish a defensive line too forward. With few artillery and no helicopter support, the line was quickly pushed back leaving me no time for deploying units in Defense mode.

In the end, I've spent most of time trying to catch up emergency situations, and I was never able to organize a solid defense with a decent artillery and reserve units support.

Luckily, in my opinion Warsaw Pact made some errors too:

Now, time to step out from the soap-box and move to the next playtest session for Scenario nr. 3 - Spearhead.