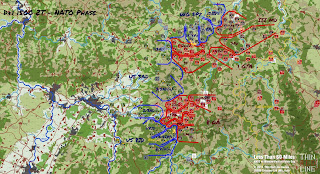 Second part of the Less Than 60 Miles After Action Report, internal playtest session 13.
You may find part one at this link and the official game page at this one.

As you maybe remember, I'm US V Corps Commander so no Bolsheviki mumbo-jumbo from me this time :)

Playtest is made on Vassal, using the production map and counters you'll find in the box. Several rules had minor adjustments during the session, so if you're really careful you could find a couple of strange readjustments here and there, but the overall flow of the events is consistent.

As for the first part, I'll keep a fast narrative and let the images do the rest.
And now, we're going to raise the curtain and commence from......

Soviet Divisions press on the assault even during the first night hours, taking advantage of reduced long-range fire from defenders. (This is a discussed decision. Does night favors the side with shorter fire range or the side with better FLIR capabilities?).

Assaults from 1st Guards Tank Army are getting US 1/3AD Brigade more and more in trouble, with its 3 battalions accumulating losses and support artillery running short of ammo. 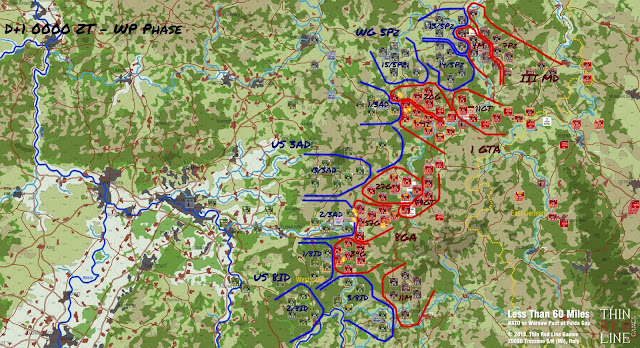 US 8th Division planned to counterattack Warsaw Pact's Southern Flank starting at 1200, but the approaching collapse of US 1/3AD brigade forces me to attack as soon as possible, ready or not.

For starting, 3/8ID Brigade exploits an imprudent deployment of Soviet 39th Guards Division HQ, attacking by surprise and almost destroying it. This could disrupt the whole Division's operations in the next few hours and offer more chances for counterattacks. 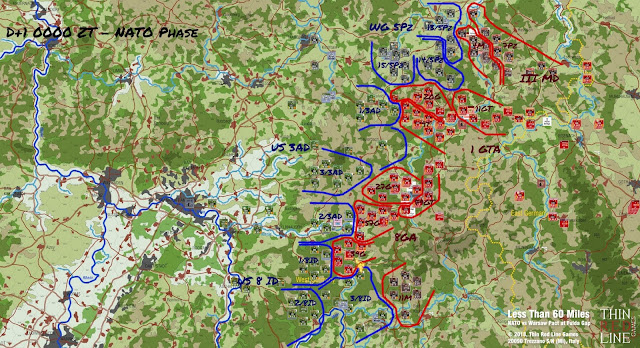 Warsaw Pact decides that a stop for Rest & Refit is needed and does not launch new attacks during the night. 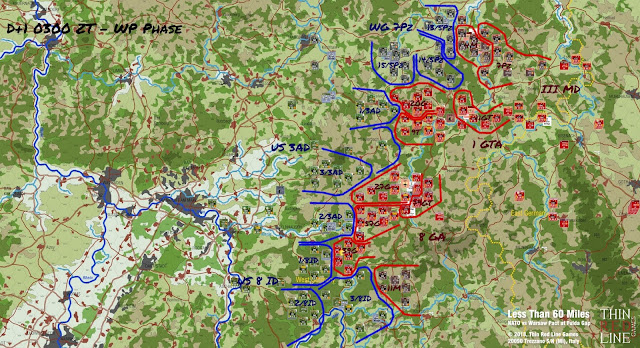 Thanks to the pause in fighting, NATO has several strike aircraft available and use them in combination with a Lance battalion to bombard and finally destroy the HQ of Soviet 39th Guards Division.

Taking advantage of the subsequent enemy disorganization,  1/8ID Brigade attacks a Soviet Motorized Rifle Regiment, inflicting heavy losses.
Assault From March, Warsaw Pact's most used Posture at the moment, is very good for mobility and offensive operation but quite vulnerable to counterattacks. 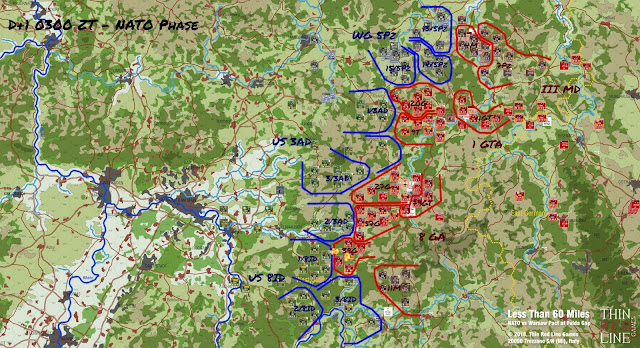 At dawn, Warsaw Pact renews full-scale assault in the areas of its two main attack axis.
The attacks fail to achieve a breakthrough, but the situation for 1/3AD remains critical as losses are mounting.

2/3AD Brigade is getting into troubles too, as 1-48 Mech Infantry Battalion fails to disengage and is forced to stay in a very dangerous position.
Disengaging from a pressing enemy proves to be one of the most difficult operations, with several possible options and counter-options. Artillery barrage fire before disengaging, interdiction fire on attacking units to force them to lose contact, interdiction fire on defending unit to stop the disengagement attempt are some of them. 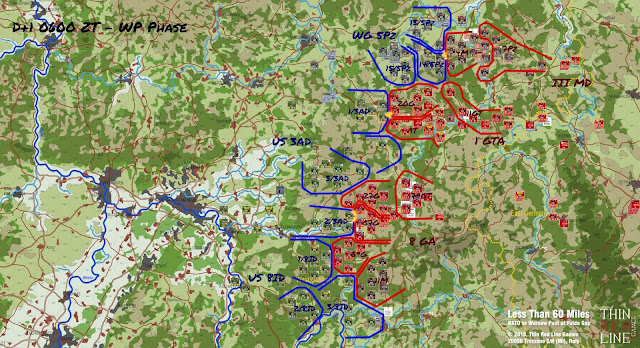 NATO tries to reorganize its lines. West German 5 Panzer tries to link its right flank to US 1/3AD Brigade and prepares 15/5Pz Brigade for a local counterattack should the Americans succumb to Warsaw Pact pressure. 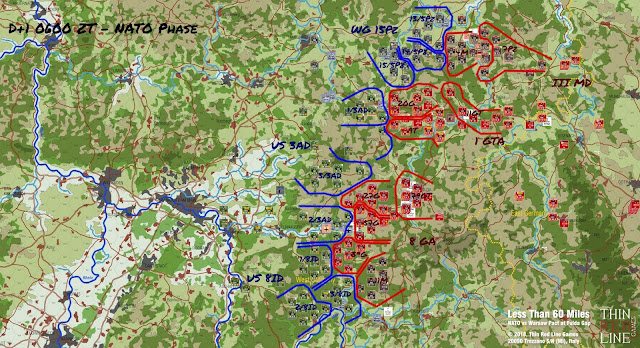 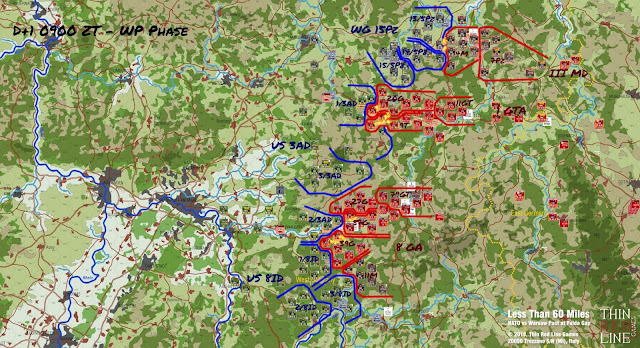 NATO cannot wait any longer to launch its counterattack, as US 3rd Armored Division sector could crumble at any moment unless Warsaw Pact pressure lessens. A breakthrough could be fatal as the only reserves available are a couple of US Battalions and one WG Jager Battalion.

In the US 3AD sector, 3rd Brigade moves to contact the North flank of Soviet 27G MRD, reducing its freedom of manoeuvre. 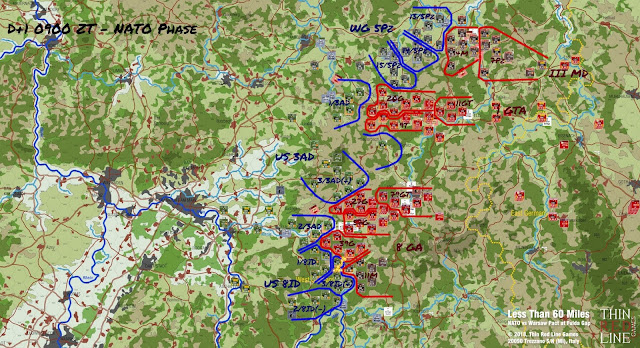 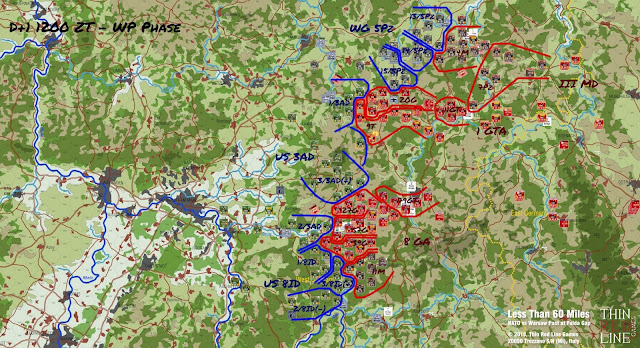 US 3/8I(+) Brigade continues its counterattack, this time targeting East German 11 MRD and inflicting heavy losses to another Motorized Rifle Regiment. 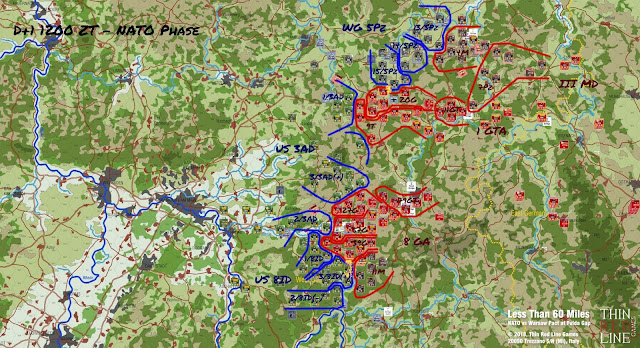 Having replenished its artillery ammunition stocks, Warsaw Pact resumes attacks along the whole front and succeeds in opening a gap between US 1/3AD Bde and WG 15/5Pz Bde.

In the South, 39G MRD continue its disengagement attempt, but Soviets seem undecided about replacing it with 79th Guards Tank Division, until now kept behind as Operational Maneuver Group. 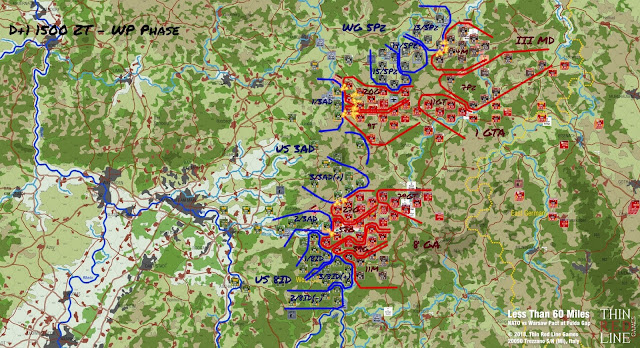 The dangerous gap between US 1/3A Bde and WG 15/5Pz Bde is filled by a WG Jager Battalion and 5 PanzerAufklaerungsBataillon (for the rest of the world, Armored Cavalry).

US 3/8I(+) Brigade counterattack goes on, hitting East German 11 MRD and forcing another Motorized Rifle Regiment to disengage with heavy losses. 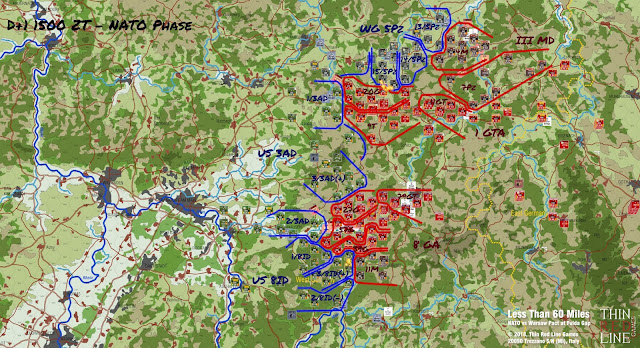 Call it a Day

As noted at the beginning of this AAR, Warsaw Pact plan wasn't particularly smart and was tailored for offering NATO several counterattack opportunities.

At this point, we decided to stop the session as this main point has been tested. Given the opportunity, NATO counterattacks at Brigade level can be very dangerous and inflict heavy losses on Warsaw Pact. A well executed counterattack at Division level could disrupt or even stop an entire WP Army.

WP wasn't too efficient in frontage definition and movement organization. 1st Guards Tank Army was definitely too packed, leaving little room for maneuver and creating horrible traffic jams when trying to relieve units on the FEBA.

On NATO side, the biggest error was engaging the two reserve brigades too early (2/8I and 3/3A), leaving no available maneuver units should something have gone wrong. 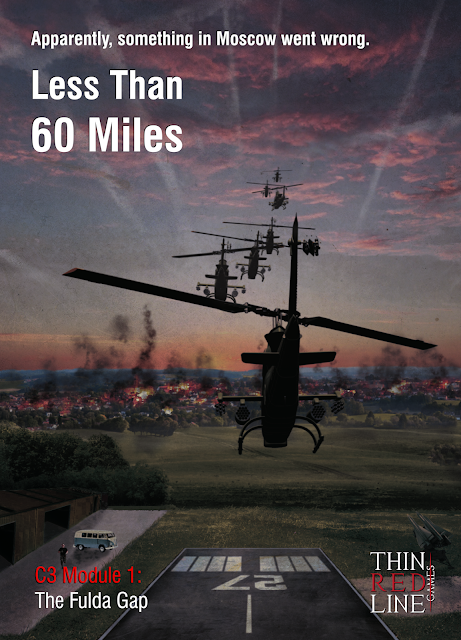 Email ThisBlogThis!Share to TwitterShare to FacebookShare to Pinterest
Etichette: C3, Less than 60 Miles