The Next War - NATO defense strategy

I played The Next War as NATO player for many times since 1980.

"Operation Attila" campaign is my first attempt on the Warsaw Pact side, and I must say it opened my eyes on the numerous weak points of the Soviet war machine and on several errors I think I've always made as NATO.

Ok, so what should NATO do?

A campaign in "The Next War" has two completely different phases:
So, NATO must survive Phase 1, minimizing ground and air losses.

The first step toward this goal is dropping  the "Forward Defense" plan.

"Forward Defense" has been the official NATO strategy during most of the cold war, primarily because it wasn't a good idea telling the Germans "in case of war, most of your country will be probably invaded by Communist forces."

Actually, if you read carefully the 4 points above, that's exactly what is going to happen. The only real difference you can make is in the number of NATO brigades lost when (not if) Soviet forces will reach the Weser river.

What NATO should avoid is a front line battle, trying instead to focus on few key strategic points and keeping a "mobile battlefield", where there will be opportunities for local counterattacks aiming at the weak communication lines and not-so-willing satellite nations of Warsaw Pact.

The second step is hitting where it really hurts. That is:

One very important condition for supply is it cannot cross unbridged major rivers.

This means that in NORTHAG and SOUTHAG areas WP must secure one or more of the highlighted areas, depending on its planned axis of advance, otherwise its divisions will simply have to stop.

So, when NATO player must choose where to hold at all costs, he should choose one of those points.

Of course, WP could choose CENTAG for its main trust, where there are almost no major rivers. I've never seen it happens, probably for the following reasons:

After the first 3 turns of "automatic supply" (more on this later) WP supply system relies on Front Supply Heads.

Here's where NATO air superiority can really be decisive.

Each successful air-to-ground attack on a Front Supply Heads will move it backward 5 hexes. Don't limit to a single attack, but force them to move back 10 or even 15 hexes with multiple attacks.

If Front Supply Heads are not able to move close enough to the front line, WP supply system will simply stop working.

After the first 3 turns of "automatic supply", WP supply system needs railroads and autobahns from the Front Supply Heads to the East map edge.

Major rivers can be crossed by supply only at bridges, therefore WP must protect a number of key bridges along Elbe river, otherwise its FSH will have no supply line.

WP will be forced to spend its precious RP to adjust bridges, thus leaving its already few decent airports damaged and weakening its air coverage. This will allow NATO to have more airplanes for bridges and airports attacks, and so on.

The only place where NATO has a good chance of holding off an attack is inside a city. Cities offer the following advantages:

A single NATO brigade, in Hedgehog mode and with EW or artillery unit in support, is a tough nut to crack for the Soviets. Two NATO brigades are a real problem.

On average, an attack against 2 brigades defending in city would have :
This translate for WP in 0% success chance in the worst case (NATO EW working), and 36% in the best case (Artillery support and NATO EW not working). Even if WP is lucky, all it gets is a single step loss on NATO units, and its overall problem doesn't change much at the next attack.

Of course, it's more than possible that NATO defender will be encircled and bypassed, but:
So, never ever give away cities without fighting; fortify with a decent support and don't worry about being encircled. For a perfect defense, include a mobile antiair unit to discourage WP helicopters ground support.

But despite all this....

The Next War is slightly (or heavily, depends on who's talking) in favor of Warsaw Pact.

The game was designed at the peak of Cold War period, when NATO was probably in its worst shape. With the fall of Soviet Union, we have discovered that Warsaw Pact was probably much less powerful than we thought and its internal cohesion was far from perfect.

We used these new facts to review or rewrite some rules, and I strongly suggest everyone to do the same if you want a more balanced and realistic game:

No +2 modifier in division vs brigade atttacks

Size difference is already abstracted by unit strength - no need to further penalize the brigade.

No automatic WP supply in the first 3 turns

In the original rules, the 3 turns of automatic supply represents stockpiled ammo and food.

Problem is exactly that, they are stockpiled - no WP division could advance 50 km per day carrying all that stuff, so the supply must be moved from the stockpile to the front units using the usual supply chain.

NATO situation is different, as its stockpiles are in the territory where its units are fighting - not 200 km away in East Germany.

Consequently, WP units must trace a standard supply line to a Headquarter, even during the first 3 turns of war.

This rule greatly exaggerate the effectiveness and reliability of Soviet Surface-to-Surface Missiles.
They were probably capable of delivering enough gas to force defender to adopt anti-NBC measures, but not enough to paralyze a whole mech brigade.

The cadre rating for all non-Soviet units is reduced by one (except pilots).
Moreover, every time a non-Soviet unit attack results in something different from "D", the cadre is reverted to its original value (i.e., the unit loses its battle-tested "5" cadre).

The original rules considered soviet EW equipment more reliable and simpler to use, making it more effective on the battlefield.

We now know better about lack of spare parts and maintenance in eastern bloc countries, so we modified as follows:

Of course this setup presumes the scenario played gives NATO enough time to move in position (not applicable in a "Sudden War" scenario). 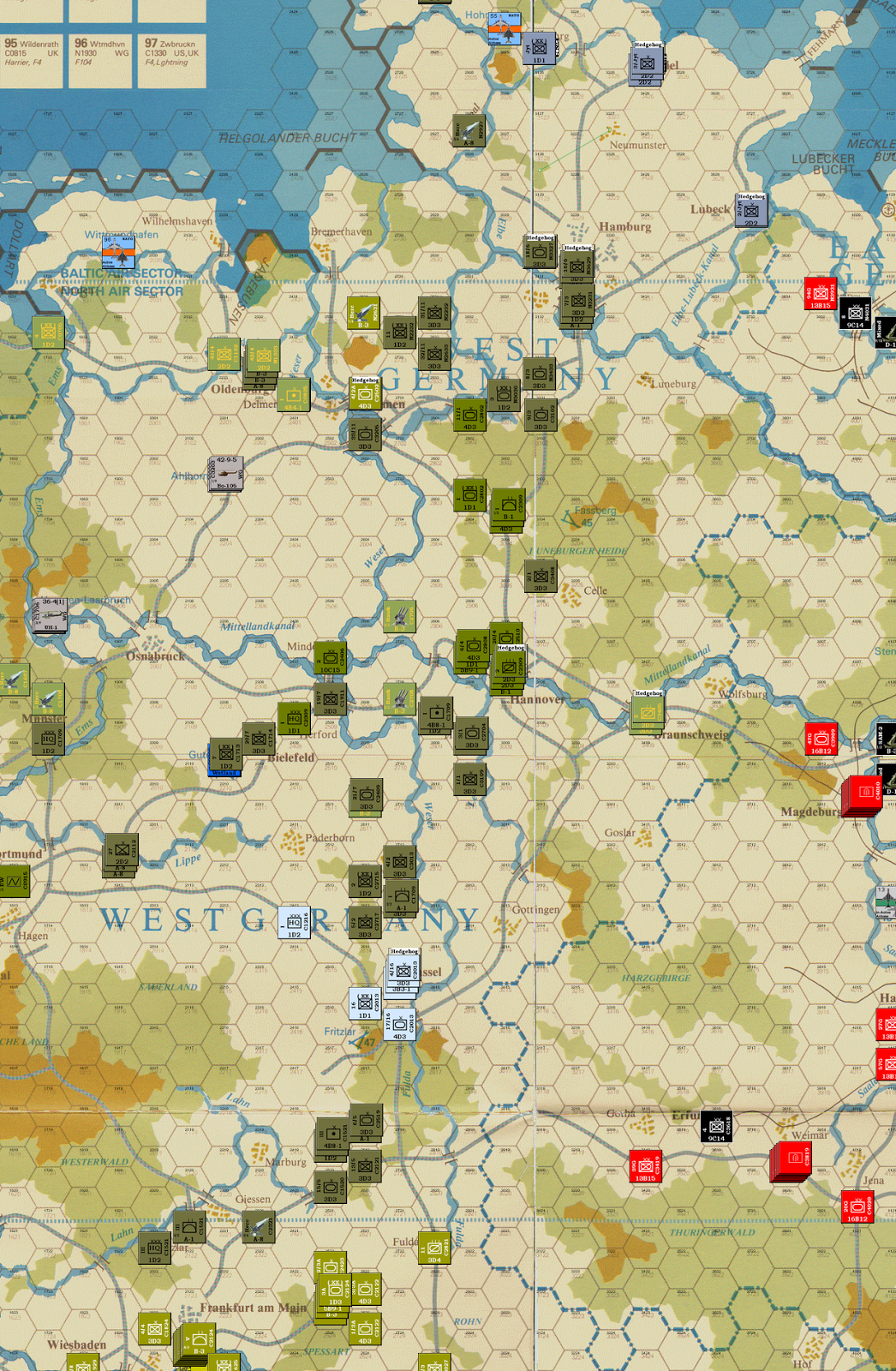 Email ThisBlogThis!Share to TwitterShare to FacebookShare to Pinterest
Etichette: The Next War

Some experiences directly from the battlefield, with the overall situation at D+8, 22:00 Zulu Time below.
The first part of the story of Master Sergeant Flyorov and Borte is here.

Master Sergeant Flyorov was crouched in fetal position, behind a large group of rocks a hundreds meters away from the  Kassel - Magdeburg autobahn.

He's been there for the last two hours. He was safe there. There was no way the enemy airplanes could see him and drop their bombs. All he had to do was to wait a little more, and when the airplanes are gone he would walk away. A nice stroll in the countryside, and in a couple of hours he will be home, at Kiev.

Too bad Borte will not see his farm. Borte was a good fellow, but too slow for this kind of things.
He told him, run Borte! Run!! But the Mongolian boy stayed inside the truck, paralyzed. Then something hit the truck, cutting the driver's seat and Borte in two perfectly symmetrical pieces.

Even behind the rocks, Flyorov could feel the heath from the dozens of Ural trucks burning on the autobahn. Once in a while, an ammo truck exploded, filling the air with the whistle of bullets and fragments. But the rocks are safe, he thought. They cannot hit him behind the rocks.

Now there was someone  in front of him. How has he found him? The man was yelling something, and looked angry.

Flyorov looked back at him and smiled. Maybe the man was telling him that it was safe now, and he could stand up and walk to Kiev.

But no, the man kept yelling at him. He was telling something about "cowardice in front of the enemy" and "traitor of the Motherland". Flyorov smiled again, and tried to say something about the airplanes. Maybe the man didn't know, he had to warn him.

Flyorov looked at the man extracting the Makarov pistol from his belt and aiming it at him; he was still yelling.
He crouched back in fetal position, thinking about the lemon cakes his mother would cook for him once he arrived at Kiev. 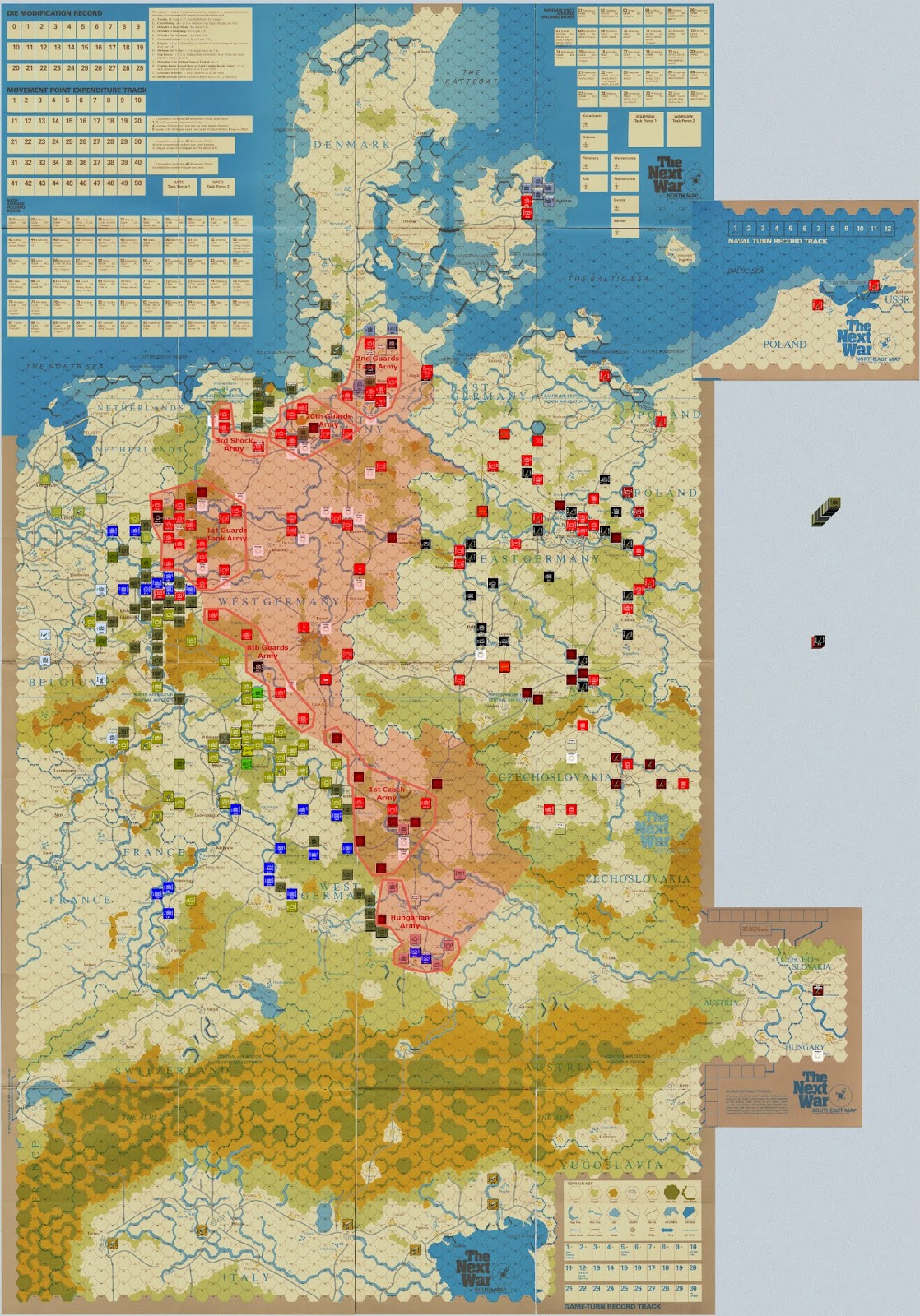 In terms of territorial gains, the offensive slowed down due to supply problems, NATO paradrops in the rear areas and front overextension.
Despite that, progress are still good in the North sector and Soviet second echelon divisions are now entering East Germany, so I'm confident the scheduled timetable of Operation Attila will have no significant delays.

Contrary to the expectations, the invasion force met a stiff resistance by Danish troops heavily supported by West German attack helicopters taking off from Bremen.
Moreover, the Danish made good use of their low quality but numerous anti aircraft assets to reduce WP ground support effectiveness.

After 15 hours of heavy fighting, the Soviet Marines were momentarily forced to a halt at the outskirts of the Danish capital.

The bulk of 2nd Guards Tank Army completed the encirclement of Hamburg and attacked NATO prepared positions in the Western part of the city; once again,Soviet troops were surprised by Danish determination and the attack failed to reach its daily objectives.

At the same time, 5th Tank Division attacked toward the Danish border.

20th Guards Army completed the encirclement of Bremen, destroying a West Germany mech Brigade in the process. Inside the city the whole 11th German Division awaits, reinforced by the retreating 18/6 brigade.

Battle at the Dutch border

In the biggest battle of the war, nine divisions of 1st Guards Tank Army smashed into the new defense line of NEDEFOR (NEtherlands DEfense FORce), with both sides throwing in everything at hand.

When the dust settled, Warsaw Pact pincer has surrounded Dutch 1st Division and the remains of British 2nd Armored Division. achieving a penetration of 40 kilometers and entering Netherlands.

The Dutch government showed once more its wisdom, refusing to sacrifice the whole nation to the supremacy ambitions of United States. At 17:00 Zulu Time, the Dutch ambassador in Moscow delivered a formal request of separate peace to the representatives of the Union of  the Soviet Socialist Republics. The request was accepted, marking the beginning of a new era of prosperity for the People of Netherlands.

Unfortunately, in the previous days most of the Dutch army had been infiltrated by subversive warmongers paid by United States and Britain. As a result, almost every Netherlands unit refused to comply to the peace agreement and joined the so-called "Free Dutch Army".

As usual, Central Front was quiet.The American Army, always ready to ask its allies to endure the horrors of war, sits idle in front of Frankfurt.

Due to the French airdrop in Munich and the USA incursion in Nuremberg, South Front was forced to halt its push West in order to rectify the situation.

1st Czech Army brought 1/1A USA Brigade to its knees and reestablished the control over Nuremberg, while Hungarian Army surrounded the two French paratroop Brigades in Munich and destroyed West German 11/4 Brigade. 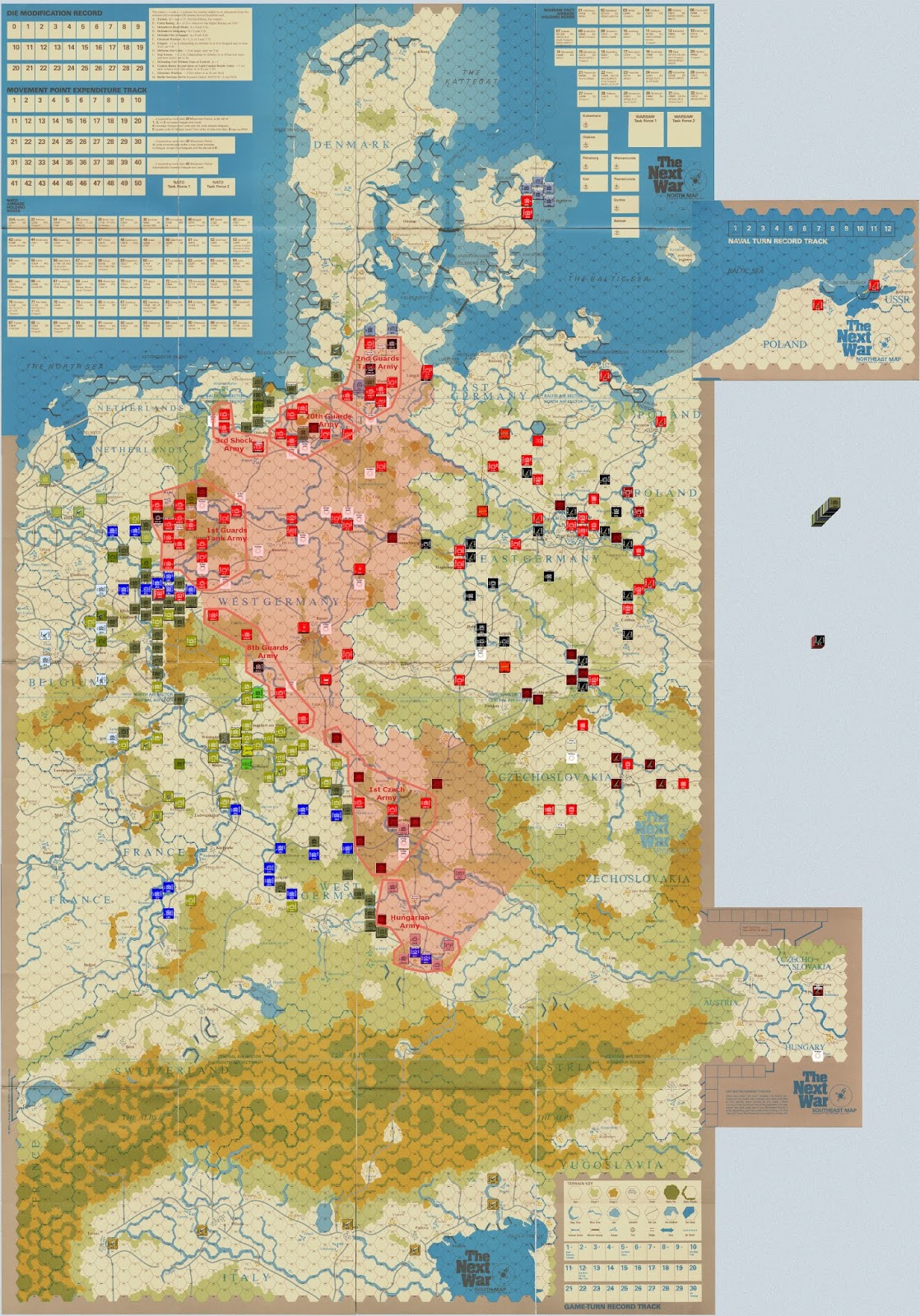