A quick update on the second run of playtest for "Forward, Comrades!" campaign game.

The first run stopped at turn 3 and brought the introduction of "Interception Areas": mega-hexes of 61 regular hexes each used to determine the probability of intercepting an enemy Air Mission and to evade enemy interceptors.

In this second run, Warsaw Pact started hostilities at game turn 2; the main thrust is in the NORTHAG area, with 3 Armies attacking between Braunschweig and Hamburg.

NATO decided to follow the official "Forward Defense" policy and to avoid any tactical retreat whenever possible.

1985: Under an Iron Sky - Some countersheets

Someone asked me a preview of the countersheets.....here you will find:


For better viewing, click on the image and then save it on you local disk.
Enjoy! 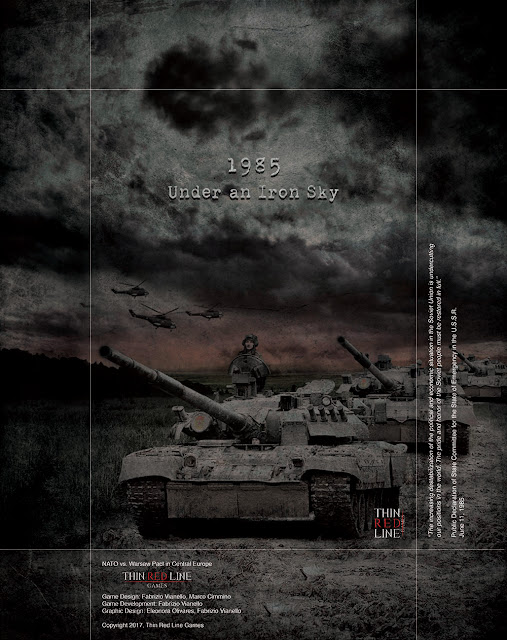 We are now beginning the playtest for the main "1985: Under an Iron Sky" campaign, titled "Forward, Comrades!".

The campaign depicts the "classical" Warsaw Pact offensive in Central Europe, with a variable preparation period decided by Warsaw Pact.

As Warsaw Pact Commander I've decided to follow the good ol' John Hackett's plan: a strong attack against NORTHAG, along a Braunschweig - Hannover - Osnabrück  - Arnhem axis, followed by a conversion South in order to envelope the Ruhr area. Nothing less ambitious would be accepted by the State Committee of the State of Emergency in Moscow (My God, how did they choose such a definition?).

I'll keep preparation and build-up at a minimum (48 hours, 1 turn) and declare war on Turn 2, in order to take NATO still off-balance. Starting from turn 3, reinforcements from US and other NATO countries start arriving in Europe too fast, and for that time I want the Soviet fleet already at war and keeping NATO busy with GIUK Gap and North Atlantic lanes defense; with a bit of luck, it will slow down REFORGER long enough.

Regarding Warsaw Pact allies Mobilization, I'll see how many of them are happy about the People's War of Liberation from the Capitalist Oppression before deciding. The last thing I need is a revolt in East Germany or Poland.

I have no clue on NATO Commander's plan at the moment, but I presume he will follow the "Forward Defense" political diktat in CENTAG area, and maybe a more fluid approach in NORTHAG.

Here's some snapshots of the complete setup:

Campaign Game playtest for "1985: Under an Iron Sky" has been slowed down by unexpected map problems, now finally fixed.

In the meantime, we've decided to playtest the quick and dirty "Checkpoint Charlie" scenario using the first printed draft of the map and the usual home-printed counters.

The symbolic significance of West Berlin and its strategic position along the supply routes used by the main thrust against NORTHAG does not allow Warsaw Pact planners to ignore the city, despite the considerable effort presumably needed for conquering it.

20th Guards Army is therefore ordered to dispatch the West Berlin Garrison within 72 hours, secure the area and subsequently move toward Hamburg to help the advance into the city.

NATO Garrison in Berlin has a very limited array of tactical choices. Without air support and no hope for reinforcements, the only real option is to hold fast and hope for the best.

NATO can only decide if his three Brigades will fight a mobile battle (Tactical Mode) or entrench and fight in place (Hedgehog Mode). NATO decides to entrench the UK Brigade, leaving French and US troops the option to retreat toward the central British position after fighting a delay battle.

A defending NATO Berlin Brigade can usually count on 8 to 11 combat modifiers in its favor: 5 for troop quality, 3 for defending in a city hex, 2 for hedgehog mode, 1 for "Festung Berlin" special rule (the lack of alternatives make more determined fighters). On the opposite side, Warsaw Pact only has 4 or 5 combat modifiers given by troop quality, unless attacking an already worn out defender.

To obtain such a force ratio, Warsaw Pact player must use precious assets such as artillery, attack helicopters and Close Air Support. Another option is the Single Echelon Assault, an all-out attack where all the regiments of a Division are used on the front line, giving a 50% increase to attack strength but more losses should the attack fail.

After advancing into West Berlin, 35th Motorized Division faces the combined forces of two NATO brigades, with the Britons entrenched in a strong defensive position. The order to secure the city within 72 hours leaves no choice to the Soviet Army Commander: defender's positions must be assaulted immediately, with everything at hand.

35th Motorized Division launches a Single-Echelon Assault, with all its Regiments in the first line, supported by three artillery Brigades, one Mi24 Helicopter and three Su17 squadrons. Unfortunately for the Soviets, that's not enough: after 8 hours of house fighting, the Soviets have lost more than 80 T-72 and 120 BMP vehicles, effectively destroying the Division's offensive value.

It's now 90th Guards Tank Division turn to assault the British Sector, assisted once again by three Artillery Brigades and one Mi24 helicopter squadron. The attack succeeds, inflicting heavy losses to the defenders and allowing Soviet troops to advance a couple of blocks into city center.

Two 7:1 attacks with 0 combat modifiers inflict two step losses on each NATO brigade, leaving the defenders on the verge of elimination but still alive.

With no more artillery or helicopter available for support, Soviet Army Commander requests permission to stop the attack until artillery ammunition stocks are replenished and helicopters readied for another sortie. Explicit threats of removal and trial by 20th Guards Army Political Officer quickly convince him that a continuation of the assault is the only way to avoid personal execution.

Soviet commanders, impervious to failure and losses, order 32nd Guards Tank Division to renew the Assault against the Opera House. The exhausted French and British survivors are forced to surrender at 2317 Zulu Time.

Warsaw Pact is finally forced to stop by lack of fresh divisions, artillery and helicopter support.
US Berlin Brigade, now with no available retreat routes, entrenches in the Southern part of West Berlin.

20th Guards Army only has 72 hours to take control of West Berlin. As a game turn covers 48 hours, Soviet movement during game turn 2 is limited to a maximum of 20 Movement Points.

By 1900 Zulu Time, all West Berlin is under Soviet control and the first 212 American POWs begin their journey toward newly prepared prisoner camps located near strategic installations in USSR.

With no time for parades, the remnants of 20th Guards Tank Army quickly moves West to join the battle near Hamburg.