Sergeant Sidorov's tank company stopped for the night near Central train station, after sixteen hours of fighting and two others T-72 lost.

"And so we're down to six", He thought. "Luckily the Germans left yesterday, and all we had to fight were Danish reservists and small groups of armed civilians."

He reached his backpack for some bratwurst and a chunk of black bread, taken a few hours ago from a grocery store. Probably a grocery reserved to the ruling class only, judging by the amount of food it had.

To tell the truth, every store he has seen in Hamburg had an impressive amount of goods of every kind; in several cases, he wasn't even able to discern what that stuff was for.

"Why in the hell they were preparing to attack East Germany? I've been stationed there for four years, and cannot imagine what they could hope to get they don't already have. Maybe my old Sergeant Instructor was right, after all; a German is always a German, no matter what."

He gnawed the black bread, watching the lights of the city fires.

"Are you sure of your conclusions, Anton Vladovich?"

The commander of 20th Guards Army looked intently at the 40 years old man in front of him: shaggy uniform, tired look, dirty. A good soldier. Too many of his officers looked always ready for a parade in the Red Square, even after six day of war.

"Yes, Comrade Lieutenant General. Our reconnaissance forces have identified elements from three different brigades belonging to 11th West German Mechanized Division, all defending Bremen.
The strength of the defense lines bring us to conclude that the enemy has regrouped and is now maneuvering at division level in Bremen area."

He closed his eyes and tried to organize the hundreds of small information pieces constantly flowing to his desk. NATO operating at division level, inside Bremen. According to Intelligence the same thing happened in Amsterdam, where a Dutch Division fortified the city.

A new strategy, or a defense against the unavoidable retaliation following a tactical nuclear attack?

Hard to guess. No doubt SHAEF was deeply worried by the collapse of NORTHAG. Maybe desperate enough to ask for tactical nuclear release.

Disperse the divisions to avoid offering juicy targets in open field? Risky.
Ignore the possibility and keep the concentration of forces for tomorrow's attack? Risky.

He stared at the situation map again, but it didn't help.

WP advance slowed down due to supply problems, but NATO interdiction effects has been mitigated by the use of Division organic supply...for now at least.

The fragile East Germany transport network did not help. Particularly in the North, the supply lines for several Fronts are forced to share the same rail or road for several kilometers. The additional anti air assets deployed in those areas stripped the rest of the lines of much needed air defenses.

When the dust settled, NATO has interdicted every available supply source, forcing Pact's division to choose between attacking with limited supply or using up the precious, difficult to replace organic supply carried by every division. 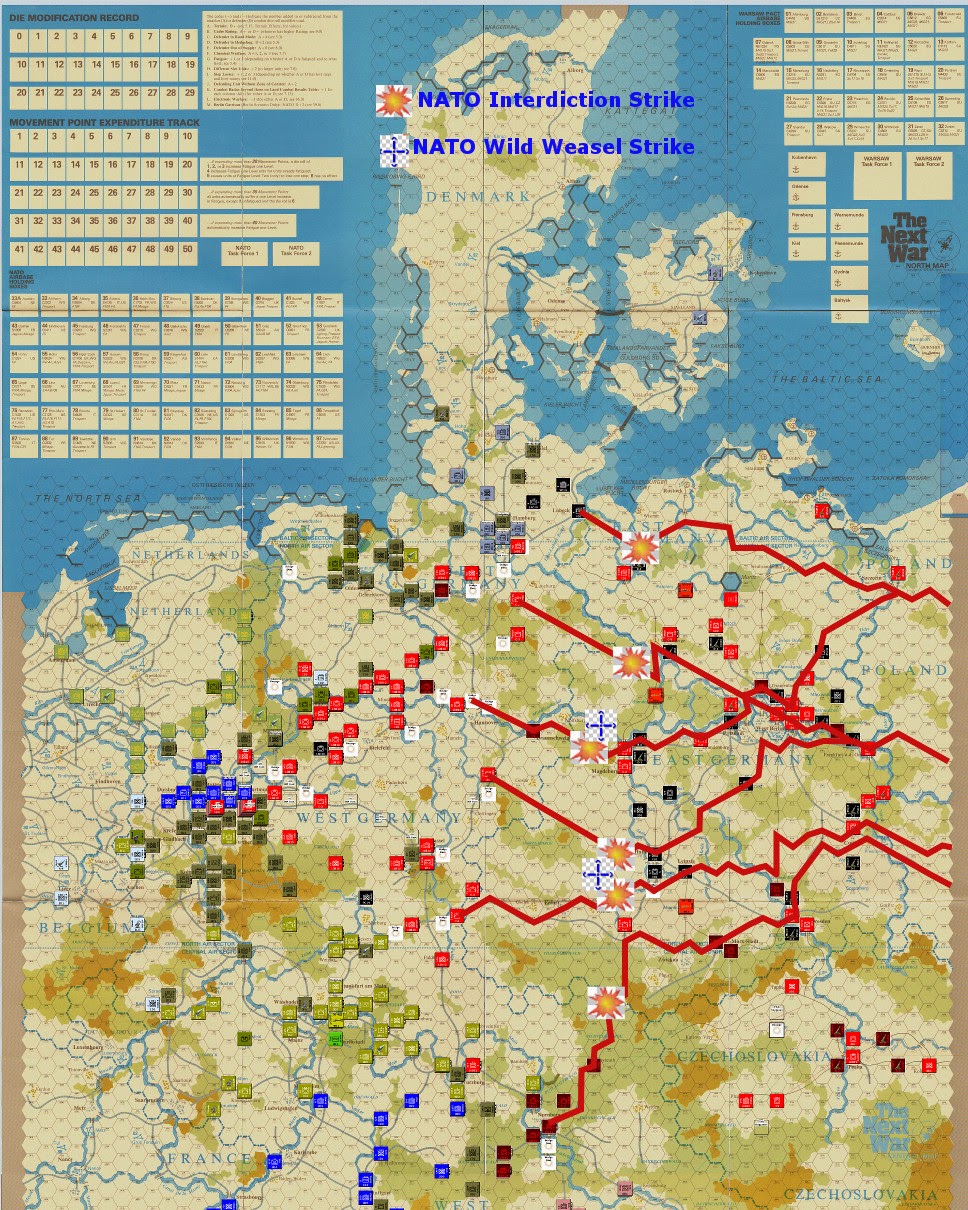 The city inhabitants, left for six days with little or no food by NATO commanders, gratefully accepted the combat rations distributed by their comrades of 9th German Democratic Republic Tank Division. 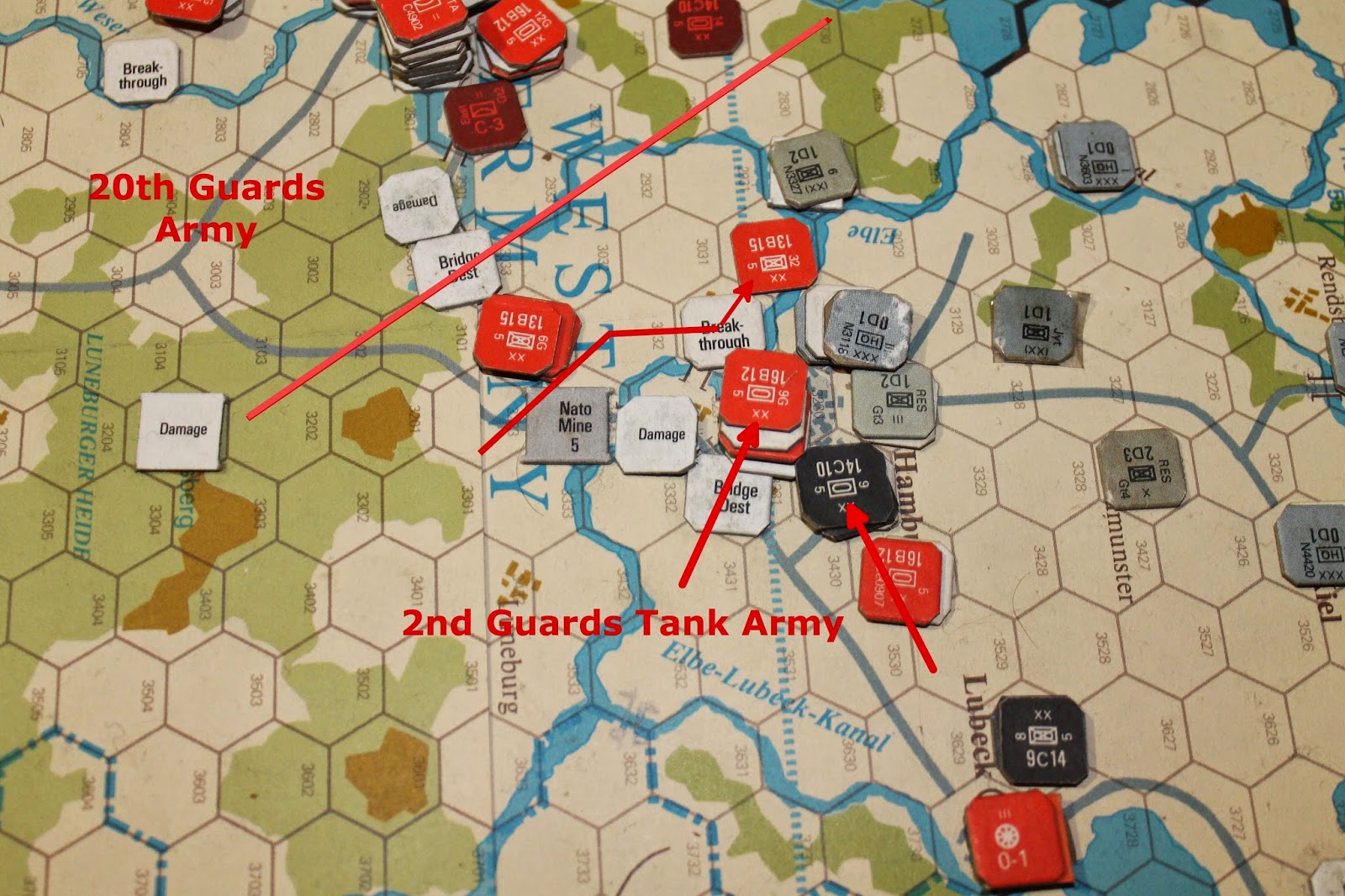 The rest of the Army reached the outskirts of Bremen after heavy fighting against elements of 11th German Tank Division. The Germans retreated into city after 12 hours of rough defense.
At sunset, the artillery regiments of the Army have been deployed in preparation for the attack to the city itself. 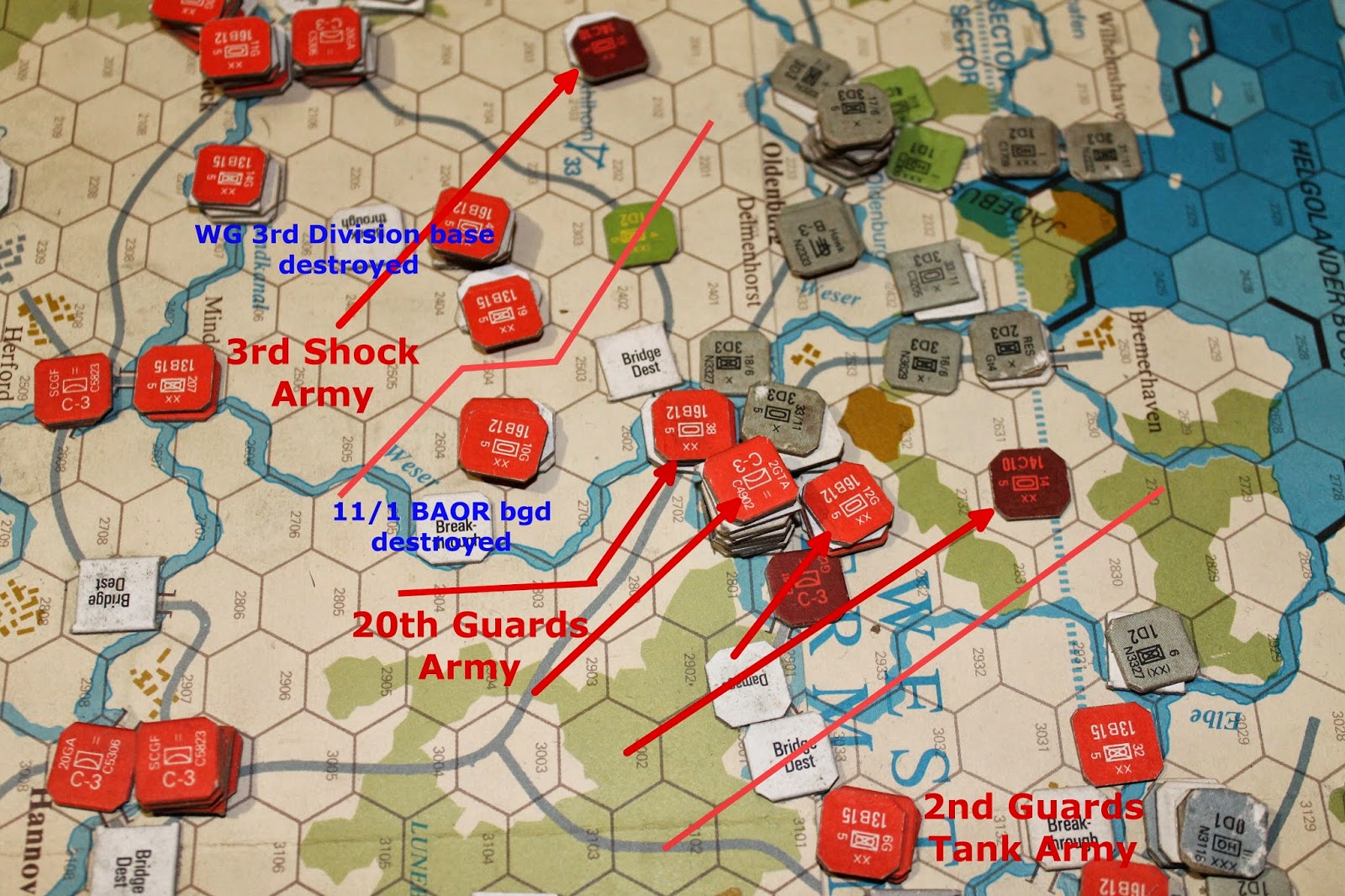 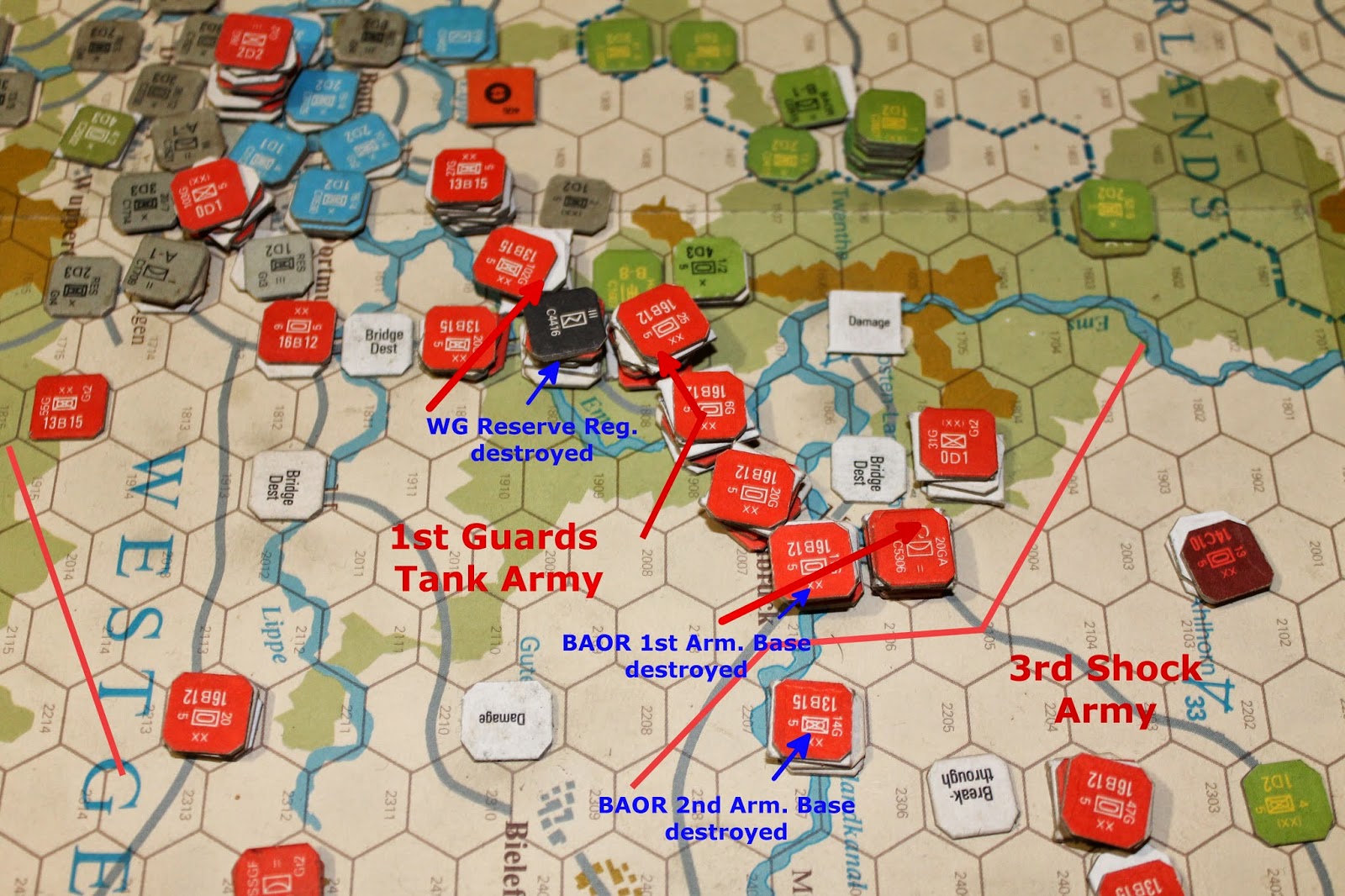 As usual, nothing much happened in Central Army Group sector.

1st Czech Army consolidated its positions West of Nuremberg, securing the bridge over the Danube and cleaning up the autobahn to Wurzburg. 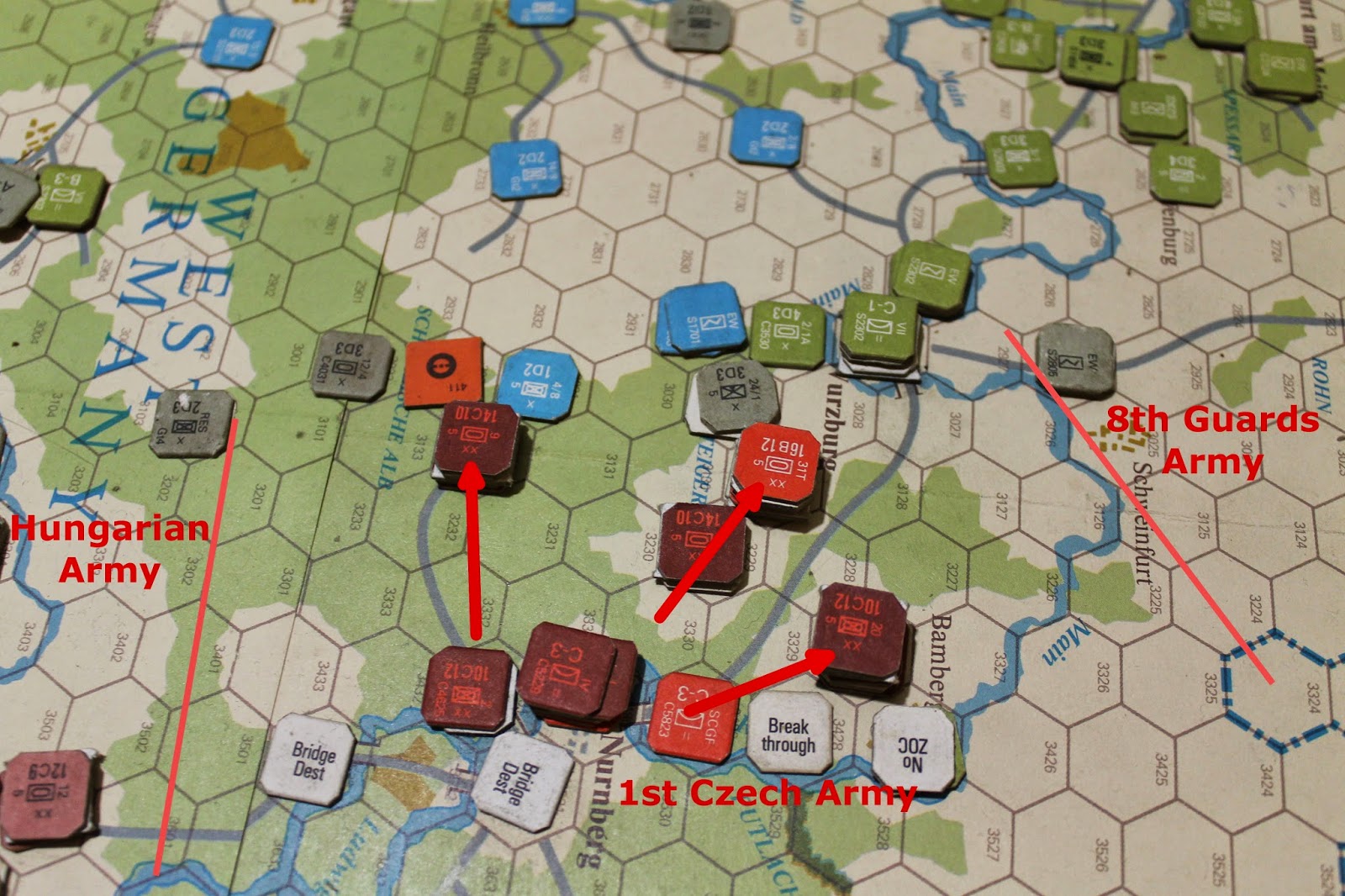 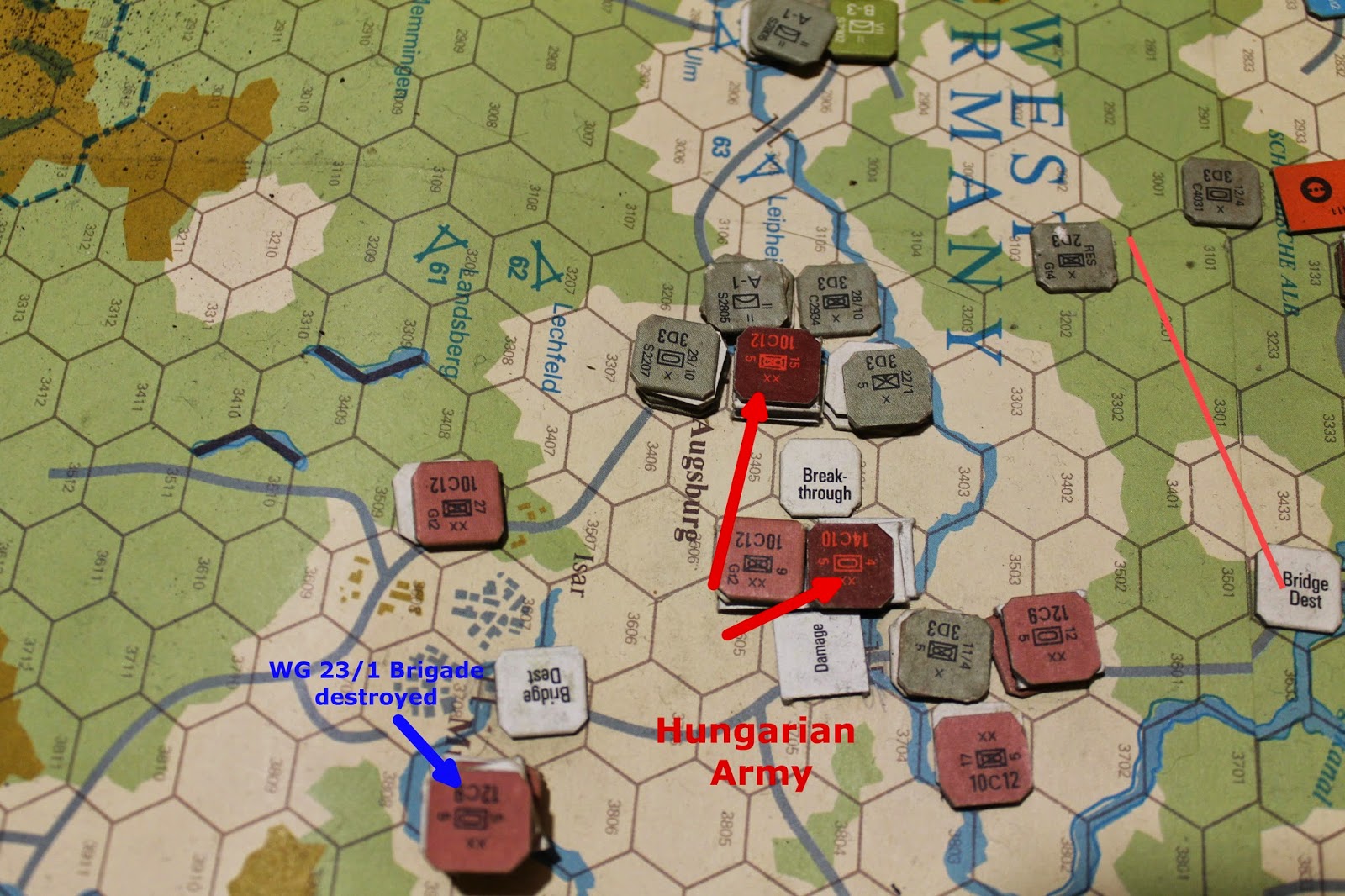 Warsaw Pact advance continued, even though the supply problems are slowing down several divisions. Half of Hamburg has been liberated and River Ems, the last natural obstacle before Rhine, has been crossed. 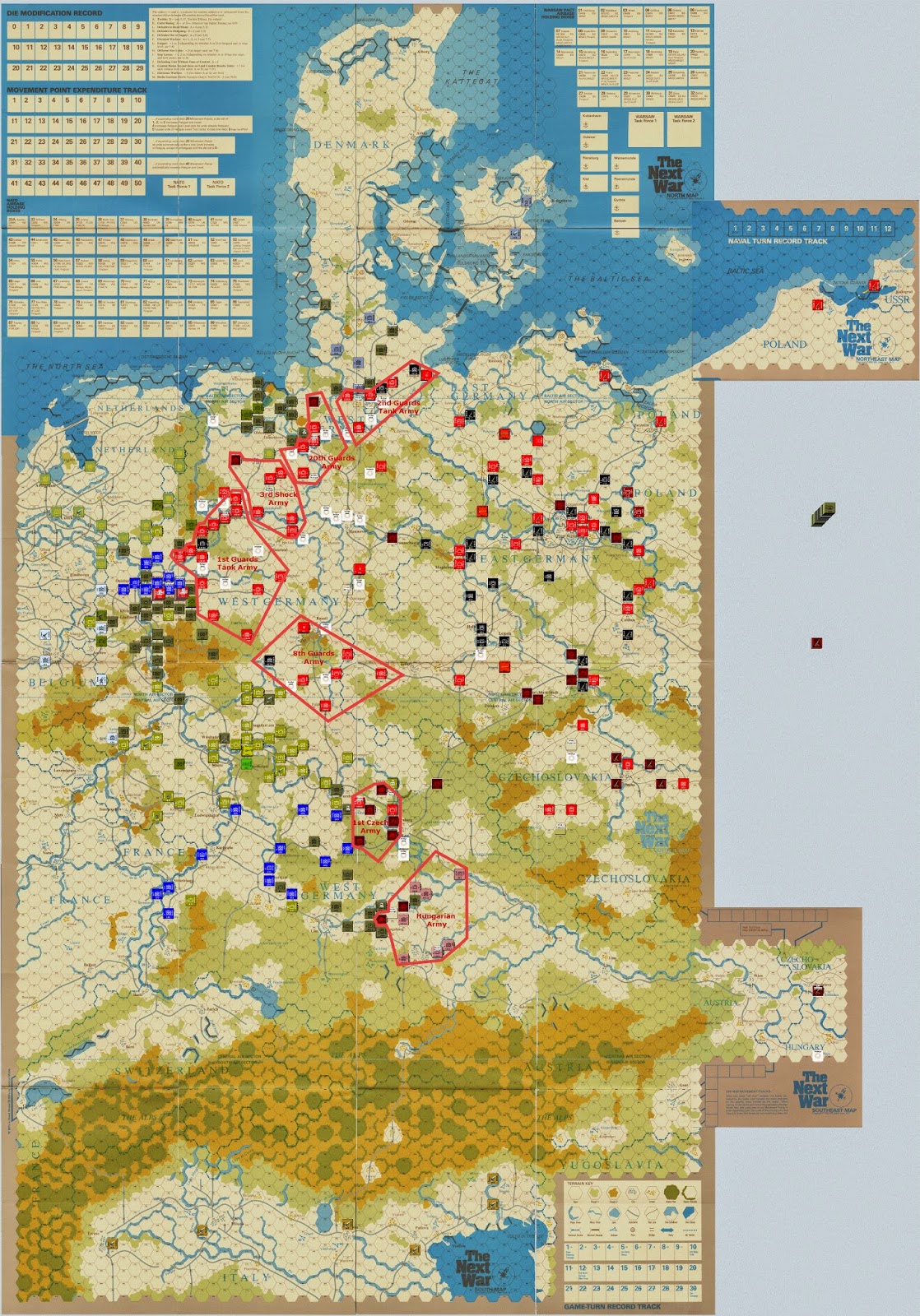