The Dogs Of War - "The River Weser Deep and Wide" AAR 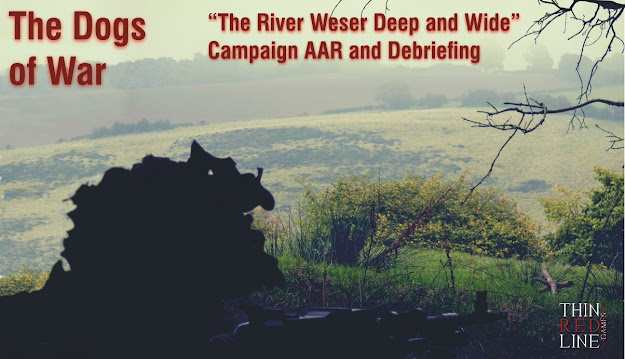 As you probably know, The Dogs Of War will be the second module of the C3 Series, covering the British Army Of the Rhine sector during the 1985 NATO - Warsaw Pact conflict.

The Dogs Of War heavily focuses on the problems of Command, Control and Communication and uses an updated version of the Less Than 60 Miles rules. The main changes are:

The following AAR covers the first 24 hours of "The River Weser Deep and Wide" Campaign. At 0600ZT July 24, 1985 the Soviet 3rd Shock and 20th Guards Tank Armies cross the Inner German Border. NATO did not react quickly enough to the increasing signals of an imminent attack and is caught partially unprepared.

Remember to reserve a copy by writing to info@TRLGames.com ;)

The First Echelon of two Soviet Armies, composed by four divisions, attacks along a wide front. NATO covering forces and refugees slow down the Pact's advance.

76th Guards Airborne division is inserted North of Hameln, blocking some key bridges needed by BAOR to cross the Weser. 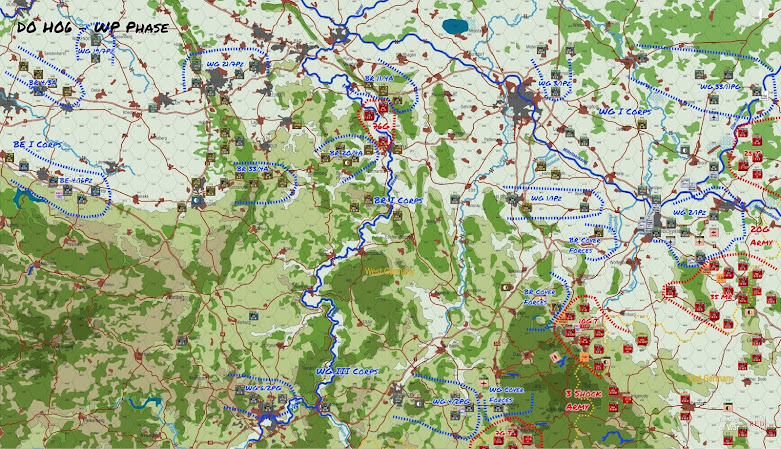 NATO starting situation is far from optimal. The main problem is the absence of Belgian I Corps, for the most part still moving from Belgium and Rhine area. Most of BAOR forces are also far from their assigned positions, and the insertion of Soviet 76th Guards Airborne Division doesn't make things better.

West German 1 Panzer in the North and 2 PanzerGrenadier in the South are forced to adjust their Area of Responsibility, in order to cover the front left open respectively by British I Corps and Belgian I Corps. 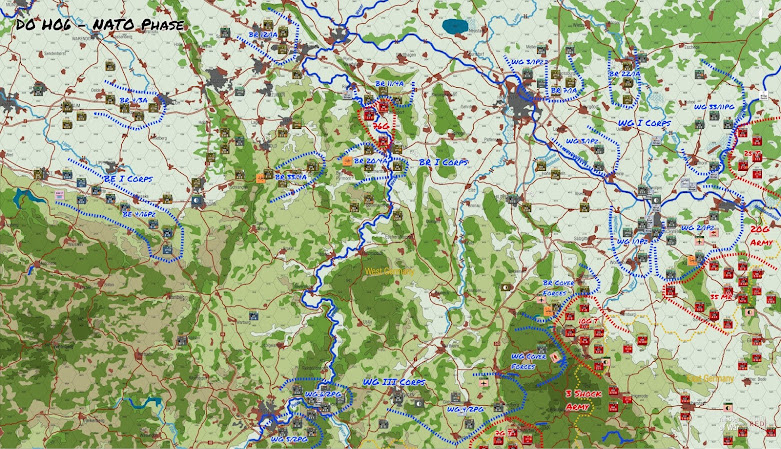 In the South, Soviet 3rd Shock Army pushes hard against NATO covering forces, with its two Second Echelon divisions approaching. In the North, 20th Guards Army advances toward Braunschweig and reaches the Eastern bank of Elbe-Seitenkanal.

Ever since the first hours of war NATO artillery is particularly effective bombarding WP formations in March Assault Posture in open terrain, slowing down their assault and inflicting some losses too. 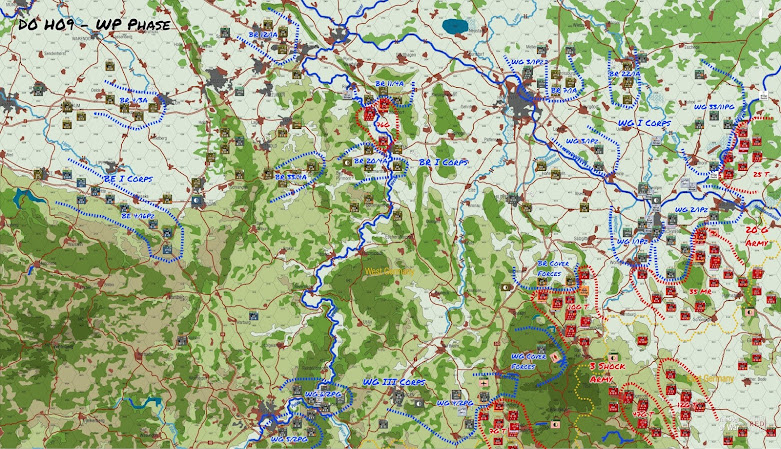 BAOR Commander decides that Soviet 76th Guards must be eliminated, no matter the situation on the FEBA. British 4th Armoured division is assigned to the task and proceeds to attack the Southernmost Soviet positions, inflicting heavy losses to 234th Guards regiment.

Despite having its Southern flank exposed, West German 1 Panzer division decides to apply the "Forward Defense" doctrine to the letter and to defend Braunschweig vigorously. To this end, 24/2/1 Panzer battalion starts deploying in Active Defense Posture in order to counterattack should an opportunity arise. 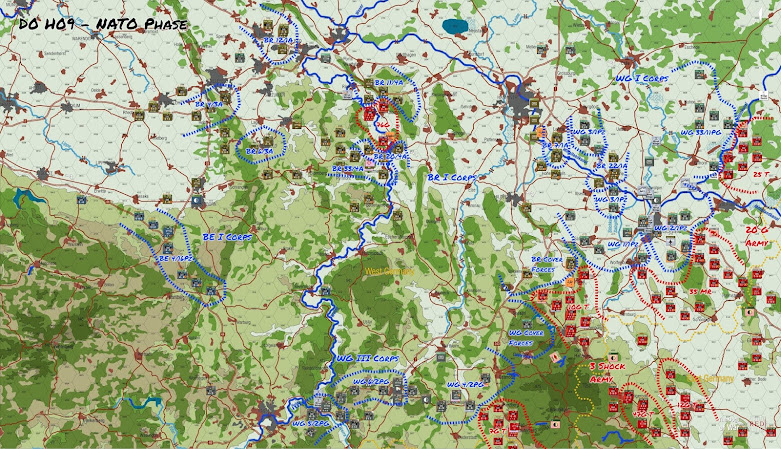 WP ground crews are overloaded and unable to keep the pace in refitting / reloading the fighter-bombers, forcing the Soviet Front Commander to stop the air strikes against the advancing Belgian columns.

Despite the extensive usage of engineers and ribbon bridges, Soviet 25th Tank division struggles to cross the Elbe-Seitenkanal in front of WG 33/11PG brigade's resistance. Pact's divisions make good gains in the other sectors of the front, putting several NATO battalions in a dangerous position. 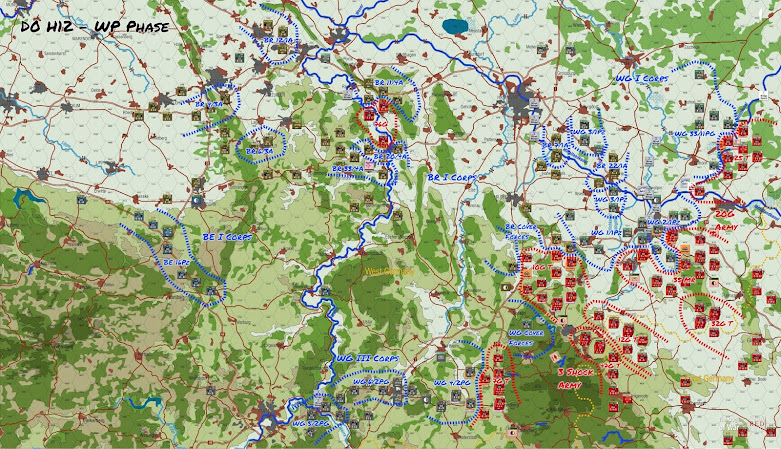 While the rest of NATO forces rushes to the front, British 20/4A brigade renews its attacks against the Soviet paratroopers, finally forcing the few survivors of 234th Guards regiment to surrender. 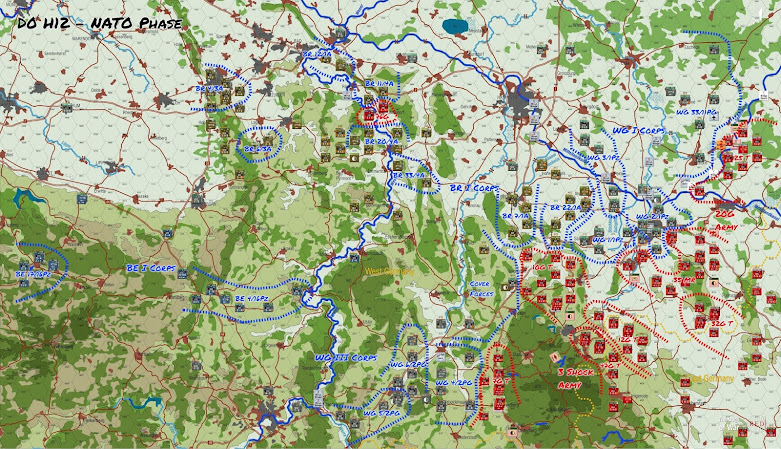 25th Tank division begins fording the Elbe-Seitenkanal using Prepared Crossing, but its regiments are forced to stop on the opposite bank to reorganize.

35th Motorized Rifle division assault the defensive positions of WG 2/1Pz in Eastern Braunschweig, and is repulsed with moderate losses. 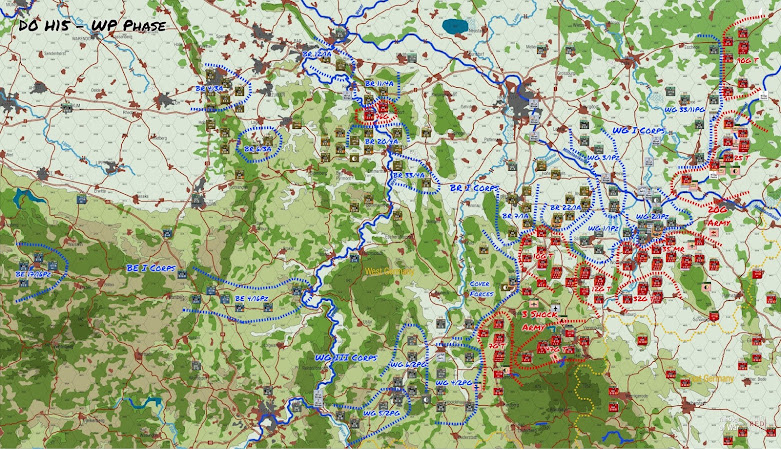 West German 2/1Pz brigade takes the opportunity for a local counterattack: 24th Panzer regiment quickly changes from Active Defense to Assault and attacks the rear elements of 219th Mot. Rifle regiment, still recovering from the failed assault on Braunschweig. The surprise is complete and the  Soviet regiment ceases to exist as an organized military formation (hex 4715).

British 4th Armoured division continues its attacks against the Soviet paratroops. After heavy fighting, 104th Guards regiment and its accompanying artillery are destroyed. 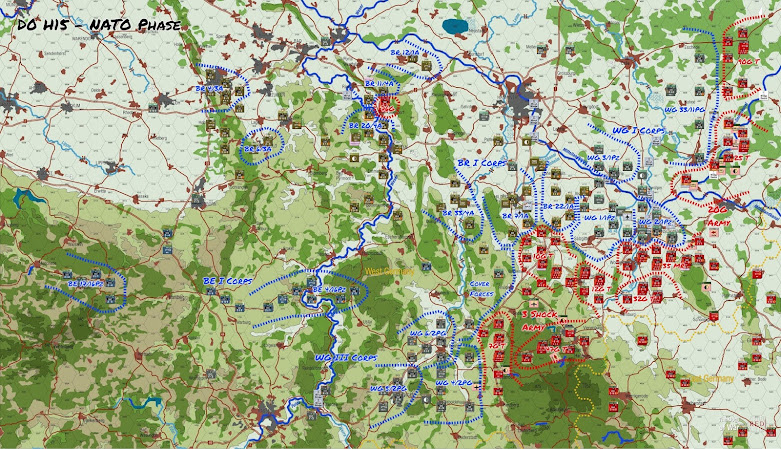 With both banks of Elbe-Seitenkanal secured, a Ribbon Bridge is finally built over the water obstacle, allowing the bulk of 25th Tank division to cross it safely.

Despite the NATO counterattack, part of 35th Motorized Rifle division continues its assault on Braunschweig. The southern suburbs are conquered, but the attack on the city center is repelled by 21 Panzer battalion. 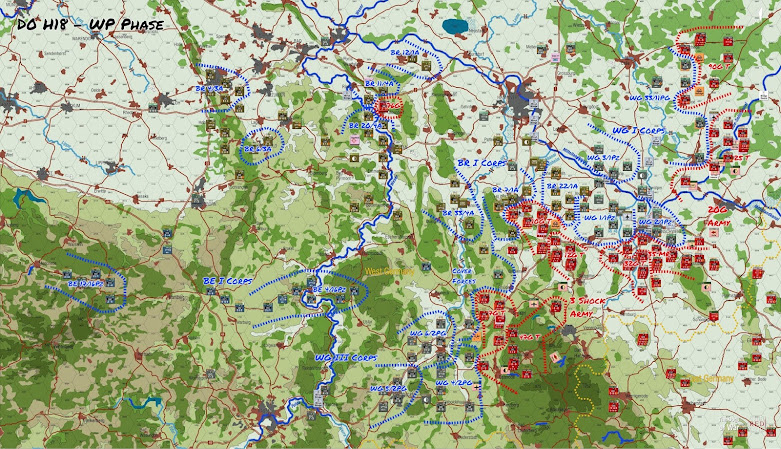 The arrival of Soviet 90th Guards Tank division in the Celle area forces 3/1Pz brigade to take position South of the town, in order to allow 33/11PG brigade to concentrate on the endangered sector.

After its successful counterattack, 24th Panzer battalion is heavily attacked by Mi-24 helicopters. With no cover from ground units, Soviet helicopters take serious damage, but they are nonetheless able to inflict moderate losses to the West German unit and force it to retreat back into Braunschweig.

British 4th Armoured division repeatedly assault the last survivors of 76th Guards Airborne division. The Soviet paratroopers finally surrender: Only 450 of them are taken as prisoners, the rest being killed in action.

British I Corps is finally able to establish a solid defense line around Hildesheim.

In the South, the still unengaged West German 2 Panzergrenadier division prepares for a night counterattack against the now exposed Soviet 7th Guards Tank. 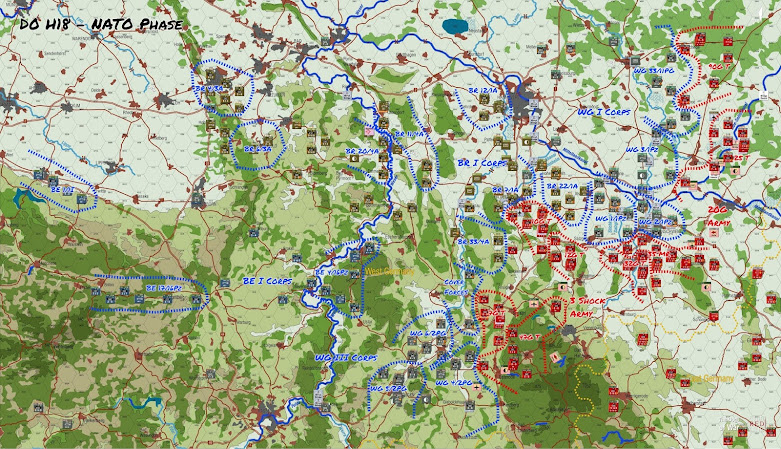 The nightfall slows down the Warsaw Pact advance, as despite the bombastic plans about a 24-hours continuous offensive it has quickly became obvious that in poor visibility conditions NATO has a decisive edge on Pact's forces.

Soviet 35th Motorized Rifle division changes the Posture of a couple regiments in order to renew the assault on Braunschweig at dawn.

Soviet 7th Guards Tank starts crossing the river Leine unopposed, with apparently nothing ahead to block its advance. 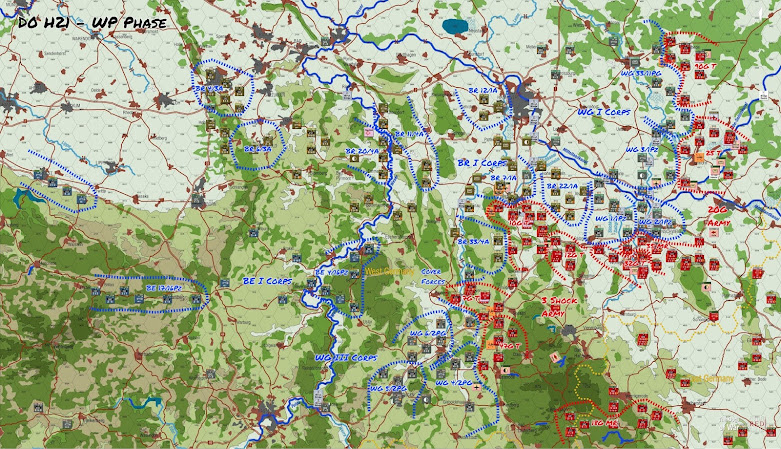 The first elements of Belgian I Corps are finally approaching their combat positions. 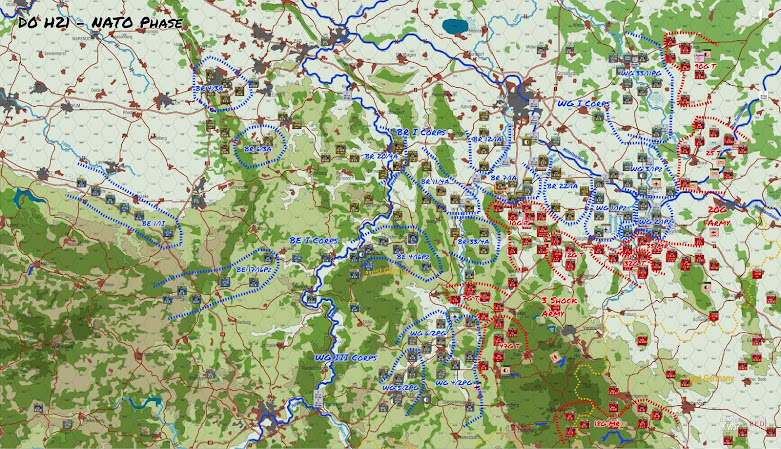 NATO Prepared Demolition of bridge in hex 4608 fails, giving Soviet 25th Tank division a golden opportunity to cross the Aller river quickly. Luckily for NATO, the Soviet artillery fails to give adequate support and the crossing attempt is blocked.

Pressed by the High Command, Soviet 35th MRD assaults once again the center of Braunschweig, supported by Sappers and heavy artillery barrage. West German 2/1Pz brigade repels the attacks, with moderate losses for Warsaw Pact. Despite the success, the defenders are worn out and in a dangerous position, so the city center is left to the Soviet.

In the South, 7th Guards Tank makes contact with the Belgian covering forces, forcing them to retreat. 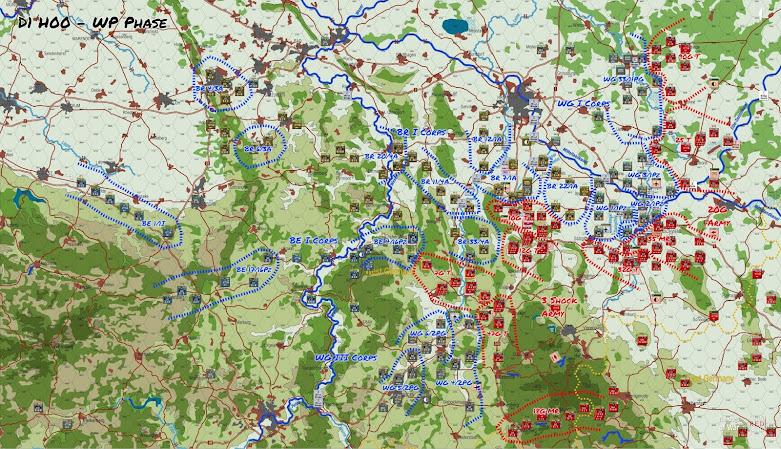 In the South, West German 2PG division springs the trap. The bridge in hex 3218 is destroyed by an artillery bombardment, effectively isolating part of Soviet 7th Guards Tank on the West bank of  river Leine, while 6/2PG and 4/2PG brigades advance North on both sides of the river. The attack takes the Soviets by complete surprise, forcing several combat and support battalions to a disordered retreat. 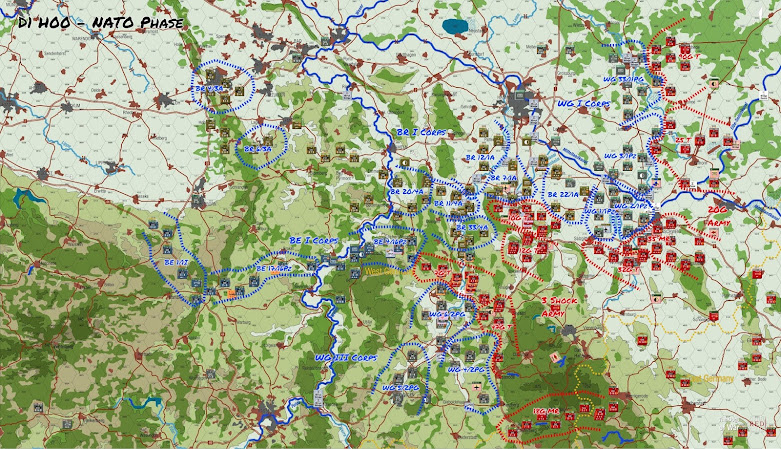 To slow down the NATO counterattack in the South, a whole Soviet 9K76 Temp-S SSM regiment is assigned to a strike against West German's 6/2PG brigade HQ presumed location. Unfortunately for Warsaw Pact, the intelligence was far from accurate and the strike has no effect.

7th Guards Tank advance has stopped. Soviet engineers frantically start building a Panel Bridge to replace the destroyed one and restore the contact between 7th Guards Tank and the rest of 3rd Shock Army. Emergency Rafts are also deployed.

A combined assault from 7th Guards Tank and 47th Guards Tank forces NATO to abandon the terrain gained a few hours before, but the losses for Warsaw Pact are heavy and several artillery battalions are near the breaking point. 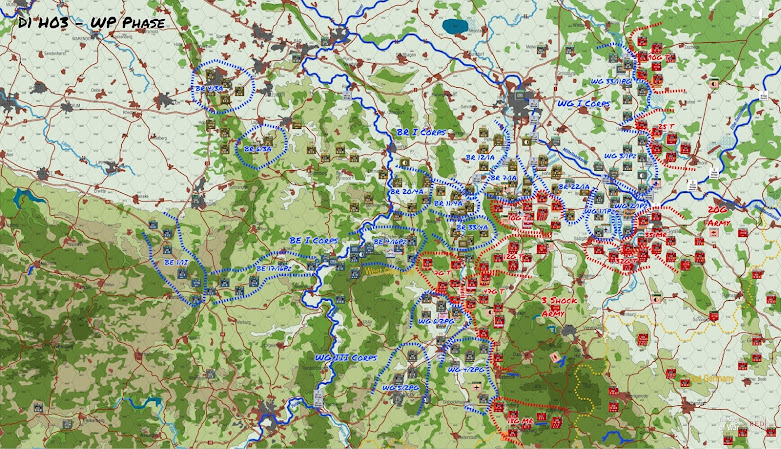 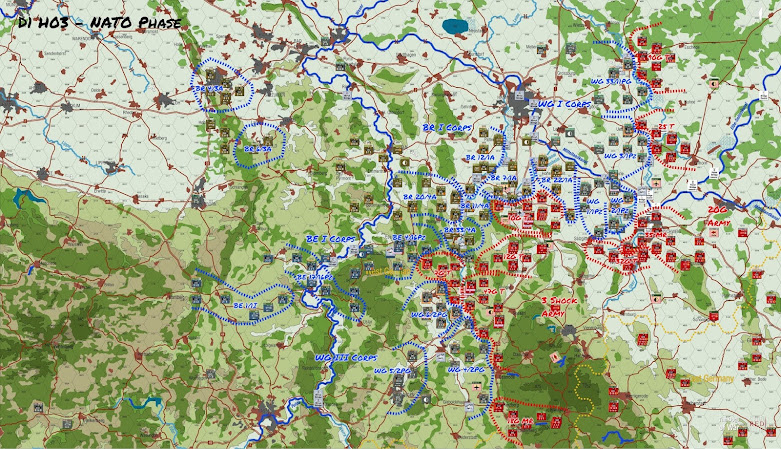 At D+1, H03 the situation for Warsaw Pact looks quite bad. The only really promising advance axis turned into a chaotic mess due to the NATO counterattack, and losses are rapidly mounting. It's true that only a fraction of the available forces have been committed and a powerful reserve of four divisions is ready to enter the fray, but they're not in the best position due to a ill-conceived initial plan.

Admittedly, Warsaw Pact's 3rd Shock Army fell into the trap quite foolhardy, but on the other hand what should a Soviet Army Commander, trained and indoctrinated to the all-out advance dogma, do? Stopping and being prudent sounds out of question in most of cases.

Another decisive mistake was probably the insertion of 76th Guards Airborne right in the middle of BAOR. A drop further South along the Weser, at the crossing points needed by Belgian I Corps, would have forced NATO to take dangerous countermeasures as the Belgian arrival would have been delayed by at least 12 hours.

Finally, the battle for Braunschweig kept half of 20th Guards Tank Army busy for one full day. A better choice would have been to bypass it South, thus giving real support to the 3rd Shock Army Northern flank, and leave the mop-up to a Second Echelon division.

Oh well, I've failed the Rodina. The only remaining option is my Makarov pistol.

The Dogs of War - The River Weser Deep and Wide 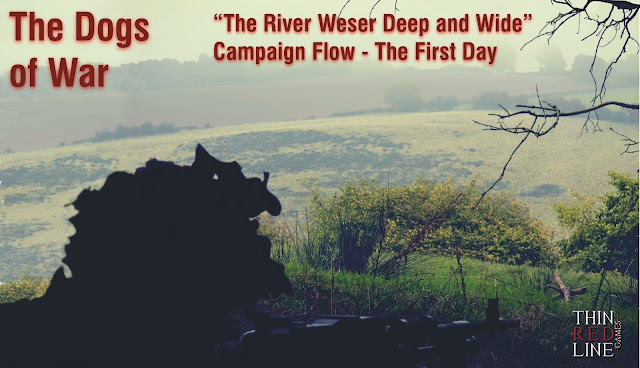 Playtest for "The River Weser Deep and Wide" campaign is going well, with the changes and addition to the rules working as planned. I'm not entering in details right now, but you'll find everything in the complete AAR we're going to publish soon :)
In the meantime, here's a video coverage of the first day of combat, from the initial attack at H0600 to the sunset of the first day, around H2100.
As a bonus, If you think you've discovered what the NATO overall plan is for D+1, send an email to info@TRLGames.com! The first to guess it correctly gets a 50% discount on his The Dogs of War copy :)