The Next War - New Vassal Module

John Rainey published a new version of The Next War Vassal module, adding a lot of interesting features like unit assignments, corps boundaries, air units return to base and more......Thanks John!

You can find the new 2.5 version of the module here; to activate the new features, remember to run the Tools / Refresh Counters option after loading a saved game.

If someone wants to try out the possible development of our "Operation Attila" game, here's the vassal saved game at the end of Turn 7
a 21:50:00 No comments:

Email ThisBlogThis!Share to TwitterShare to FacebookShare to Pinterest
Etichette: The Next War

"Comrades, I know we are all tired and our heroic troops already went beyond our best expectations.
We already showed the capability and skill of the Marxist-Leninist soldier, conscious of his historical mission and not a mere puppet in the hands of a capitalistic government that keeps the proletarian masses under the yoke of ignorance!"

Standing rigidly at attention, Captain Milan Stepanovich Zhilin was trying his best to hide the true feelings about his regiment commander's speech. Colonel Osip Aleskeevich Yankov was notoriously a fanatic, always ready to denounce his officers for 'counterrevolutionary thoughts'.

'...the skill of the Marxist-Leninist soldier, conscious of his historical mission...', he thought bitterly. After ten days of war, he has only seen trembling Belorussian adolescents asking themselves why they are going to die so far from home, and poor Ukrainian farmers trying to find a way to survive a MLRS artillery bombardment.

Colonel Yankov continued his motivating speech: "After the sound victories in the so-called Federal Republic of Germany, the time has come to inflict the final blow to the remains of the once proud armies of the European slaves of America! The collapse of NATO is getting near, and we will not stop now, no matter what sacrifices are needed, just a few steps before the final goal of freeing the oppressed German workers from their slavery!"

'...the time has come to inflict the final blow...', pure bullshit. His infantry company had 40% losses, no food, and fired his last antitank missile four days ago. Without replacements and supply, the best they could hope was to survive until the arrival of the second echelon reinforcements.

But of course, there was no way to make his commander at least consider the truth. A single word of disapproval and he would find himself under trial, with a one-way ticket to Siberia.

Colonel Yankov was now approaching the final part of his speech, in an unstoppable crescendo; ".....and once again, Comrades, I call on your unwavering faith in the way traced by Lenin, to bring this epic struggle to the unavoidable conclusion predicted by Karl Marx! The fall of the capitalistic system!"

"FORWARD, COMRADE COLONEL!", Captain Zhilin shouted in unison with the other officers.

Yes Comrades, we're still alive!
The progress has become painfully slow due to annoying real life events, but we're not giving up.

BTW, Just in case some of you have an insane curiosity about the real people behind the uniforms, here we are.

The situation in the Hamburg - Bremen sector didn't change much, with the surrounded NATO units entrenching and getting ready for the upcoming assault.

Further West, the newly formed Netherlands Defense Force (NEDEFOR) retreated behind the Rhine after being defeated on the Netherlands border, leaving the surrounded Dutch 1st Division to its fate.

Losses were replaced by US 3rd Armored Division from CENTAG, probably supported by an artillery brigade and mobile SAM.


In the Ruhr area, several West German brigades moved in reserve, leaving the burden of defense to French 4th Division only. Intelligence suggests they will be used to form a mobile reaction force in NEDEFOR rear area.

US V Corps has been stripped of 3rd Armored Division and several support units, moved North to reinforce NORTHAG. The removed units have been partially replaced by units of French II Corps.

French II Corps has been removed from front area and is currently moving North. The whole burden of SOUTHAG defense has been left to a reduced US VII Corps and German II Corps.

During the end phase of the turn, I had to face the first serious consequences of NATO's "Operation Hand of God". Due to the displacement of WP Front Supply Heads, most of my frontline artillery and flak regiments have now very limited or zero ammunition supply.

Luckily, in the next 24 hours two second line Armies will arrive from the Motherland, bringing their full complement of 8 artillery regiments and 8 mobile flaks. 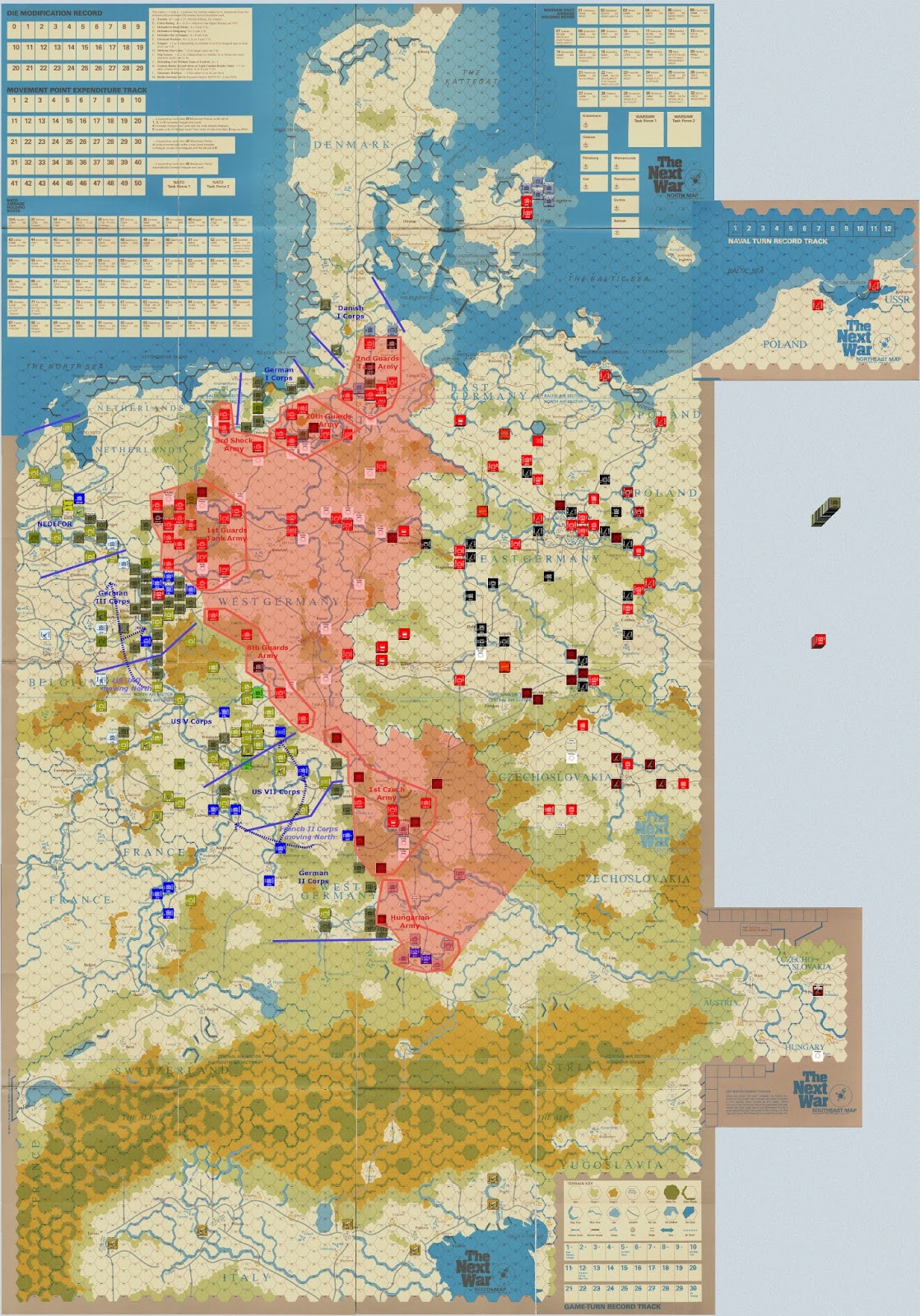