Near Olpe, West Germany - 65 km East of the Rhine

Captain Wilhelm Krause hissed a couple of swears and removed his headphones.
"Regiment command forecasts hot sky, I'm going to take a closer look at the mess down there. Rutger, command to you."

He opened the turret hatch of his T-72 and climbed out. The rest of his Tank Company was aligned just behind the top of Hill 233; seven T-55 out of the starting nine, and they were among the luckiest of the whole 7th Panzerdivision. 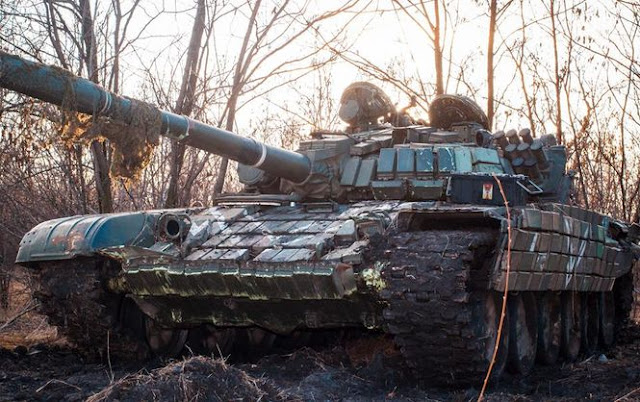 "What the fuck am I doing here" He thought. "We should have marched to Berlin and have Honecker and his lackeys hung in front of the VolksKammer."

When the mobilization started, there were rumors of a riot being organized in the Nationale VolksArmee. Krause was ready to join, he was just waiting for someone - anyone - to give an order.

But the order never came. Two days before the beginning of hostilities, several high rank officers of his Division disappeared and were replaced by German-speaking Soviet staff. The fear of STASI and of retaliation over families at home did the rest, and on May 3 Honecker was still alive and the whole Division was crossing the West German border.

He crawled to the top of the hill, covered by the tall grass; in the plain below, probably hidden in the woods, there were elements of US 1st Brigade, 8th Mechanized Division.
The Americans had been under attack for the last 13 hours by three different Divisions with heavy artillery support, and were probably tired and running low on everything. Moreover, they were now encircled by 4th Motorisierte-Schützen Division to the South and Krause's 7th PanzerDivision to the North. Despite that, they were still fighting.

Krause thought about his father and his World War Two stories; he fought the Americans in France and in the Hurtgen Forest, before being captured in the Ardennes. He talked a lot about the American airplanes bombing and strafing at every hour, every day, forcing Wermacht to move only by night, or with bad weather. "The Yankees had lots of equipment and lots of guts, but without their P-51 we would have kicked them back in the Channel!" his father always concluded.

"I wonder if the story will be the same here", Krause said to himself, looking at the sky.

The sound of  jets was almost continuous, and in a couple of minutes he saw at least two A-10, a single AH-1 Cobra and several other enemy planes attacking a group of BMP-1 from Soviet 55th Guards Division, advancing along the East - West road leading to Olpe. He counted at least 12 BMP-1 destroyed.

"Twelve destroyed. In two minutes. Shit, we are going to die in this fucking valley."

Thoughts of desertion and surrender passed in Krause's mind, but he forced himself to get real. If he deserted, Martha would be arrested with some ridiculous charge of "ideological subversion against the state" and thrown into jail, and the childs would have to grow in some "re-educational"  structure.

500 meters to the South, the first smoke shells from 1st Guards Tank Army Artillery started to land. Krause crawled back to his tank, put back the headphones and switched to the company channel: "Welle 2, Welle 21. Moving in three minutes. Heavy enemy air cover, I want speed and zigzag movement, don't lose time looking for targets until we reach line Kobalt. Over."

In the following three minutes, Krause felt like he aged one year. His world shrunk to the smell of the oil, the sound of the engine and the image of Martha crying over his tomb.

The radio crackled, bringing him back to reality: "Welle all, Welle 1. Execute Kobalt. Over.".

The T-72 started to move, slowly at first as its 41 tons struggled to reach the top of the hill, then taking speed as it rolled down the slope on the other side.

Krause scanned the outside using the vision periscopes. "We'll be inside the smoke area in one more minute....just one more minute, please, I pray You...". He involuntarily squeezed his eyes when a strong blast came from the front of the tank, but he recovered quickly. The simple fact they were still alive meant that an element of the reactive armor just exploded, destroying an incoming enemy round.

A rapid succession of explosions, followed by the screeching sound of metal cracking, and the tank stopped. Smoke started to invade the cramped space of the T-72 turret. Krause yelled "A-10 gun, he got our tracks....GET OUT! GET OUT NOW!"

He opened the turret hatch and tried to get out, but his leg was blocked by something. He looked down. The gun autoloader was destroyed, and a piece of metal had pierced his left leg. Blood was everywhere.

Krause fell back on the small commander's seat inside the turret. He was tired. Worn out. He thought again to Martha, crying over his tomb.

Air war at D+14 followed the same pattern of the previous 6 days, with both sides committed to execute or prevent Operation Hand of God - NATO attempt to utterly destroy Warsaw Pact's supply infrastructure.

In North Sector, WP fighters met no resistance at air superiority level and were able to intercept the bulk of NATO air force, entirely allocated to ground support / strike missions.

The final balance of losses was quite heavy for NATO, even though not as good as Group Of Soviet Forces in Germany Command hoped:

Until now there were no strikes targeting the Front Supply Heads directly, but NATO used up approximately half of its available bombers, so the next 36 hours could bring some surprise.

The primary targets during the last 12 hours were: